Posting Marisa related stuff in the Marisa thread is on topic and relevant. Necrobumping only applies to stories.

I wish to have a nice summer with Marisa

Wasn't there a story with an evil Hina? Just name drop it in here if you remember. 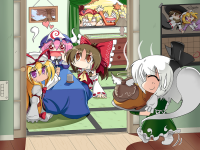 Enjoy your Thanksgiving, everyone!

Is there any toohoo that can defeat Yuyuko Saigyouji? And I'm not talking about PCB Yuyuko with edgy quotes and flower patterns in her dress, hell I'm not even talking about IN Yuyuko with an endless gluttony and a ghost holding a lantern besides her. I'm talking about TD Yuyuko with a poorly desgined dress pattern and a menacing finger. I'm talking about not-having-a-reason-to-fight Yuyuko Saigyouji using her innate ability to control departed souls and the other OP ability which is 死を操る程度の能力. That one Yuyuko who uses Cherry Blossom Sign "Cherry Blossom Blizzard Hell" in the Overdrive form to enclose you and make you have a hard time in the very beginning of the game. The Yuyuko whose Stage 1 appearance has 4 Spell Cards and lack the defeated portrait at the end of the match. That's the Yuyuko Saigyouji, Ghost Princess of the Netherworld, Dreaming Ghost, Ghost of Flawless Immaculate Beauty, Enlightened Ghost that I'm talking about.

This is why we need Wizanon.

+ 28 posts and 9 images  omitted.
[View thread]
Anonymous 2015/11/20 (Fri) 13:58 No. 22079 ▼
Delete Post
Report Post
>>21674
Reimu is preserving the status quo at all costs. Change is being stalled at any price. Change is the one universal constant though. Anything that can upset this status quo is a threat. Ergo, over time, the reprisals will just continue to grow more brutal to keep the ever-stronger winds of change from affecting the bubble.

So how long until Usami Sumireko gets wasted for upsetting the balance by handing out 3D printed guns in the village?

I have this funny paralell drawn in my head between GNU guns and the Gensokyo system being proprietary. I'd just like to interject for an eastern wonderland... LET'S PLAY A GAME. IT'S CALLED "GUESS WHERE I AM, NERDS"

Gues where I am at.

THAT SEEMS TO HAPPEN WHEN I CHANGE MY IP

OR, WELL, AT LEAST WHEN I USE A DIFFERENT ROUTER

what's up with that

Do you guys mind touhous as main characters in stories?
Asking for a friend, I swear.

And I mentioned Fell's tendency as I feel it sort of detracts from his otherwise solid writing. He's good enough not to need some gimmick.

>it reminded me of that other great noir story that I can't remember right now
>Compensation: Adequate

That would be because he wrote that one too. SolusLunes = Rabbit.