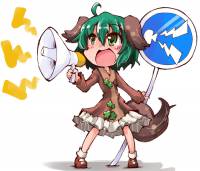 With all the very established threads and authors here on THP, sometimes it's hard for new blood to get their foot in the door. There's a lot of different boards, too, and it's easy for new stories to go unnoticed because of their location.

That said, this here is the thread for newbies to tell everyone about their story and why it's the best story ever and you should go read it!

I started a story called "Fame and Misfortune" (>>/youkai/28957 ) just today. It's an adventure story about Yamame and Hina setting out to set their reputations right and the setbacks they encounter along the way.

Were you inspired by Tengu of (Mis)Fortune by any chance?

I know /th/ is clogged to all hell with new stories, but one more can't hurt, right?

It's more likely than you think.

The dead are rising in the Land of Illusions! Okay, it's been known to happen from time to time -- zombies aren't exactly rare in Gensokyo -- but this time it's serious! Help the Shrine Maiden of Paradise fight the undead hordes, before the entire land falls to a zombie apocalypse!

I propose for this thread to be taken up in consideration of becoming a sticky.

Anonymous 2014/07/07 (Mon) 01:36 No. 13348 ▼
Delete Post
Report Post
Some posts in the thread have been deleted. There are plenty of other places on THP to discuss other writers and the site in general. This thread is a place for newcomers to make themselves known and we owe it to ourselves to give them a good first impression.

Inspired by Red Dead Redemption I imagine (which conveniently enough I am in the process of playing)?

Come for the worldbuilding, stay for the MORE WORLDBUILDING.

You take the role of Ryuko Hakurei, a priest of the Hakurei shrine located in the outside world.
After he travels to Gensokyo for the first time to take care of some minor business, things have been set into motion. He'll get to learn more about himself and who he is, who and what the Hakurei clan are, or were, what Gensokyo is, and the truth about who created this magical land.

Triad!Qpt.kK3BPo 2015/01/02 (Fri) 22:43 No. 13595 ▼
Delete Post
Report Post
I'd forgotten this thread existed. I started a story starring Kagerou. It doesn't aim to be very long, will try to update frequently and will include plenty of interaction with other touhous. Hopefully it'll be a fun and enjoyable read.

Others needs an 's'.

It's summer and I'm bored and terrified of employment. Give me something to fill my time; what stories we got lately?

Flanders!ySh0zNntaM 2015/07/10 (Fri) 20:51 No. 13712 ▼
Delete Post
Report Post
>>/others/60957
Assume the role of an otherworldly demon in 16 century Europe! Your mission is simple: assist a group of vampire hunters in destroying a powerful and infamous vampire known as "the Scarlet Devil."

It can't be too hard, right?

I only just realized I could post this in here.

Reimu Hakurei. That girl sure is an odd one, huh? Come see Ran Yakumo peel back the history behind Reimu, her spiritual training, and the catastrophic events that led to a decades-long gap between her and her predecessor.

Elementals? Since when do they get a spotlight? Well as it so happens this MC is an Elementalist. Witness the experiences of an Elementalist try and not only control her powers, but watch others unravel her dark past. Other characters include the four elemental spirits of Aringoth accompanying MC and how and why they joined her in the first place.

You (yes, YOU) are a red(?)-blooded man of some description. You could be human, or maybe you're youkai. You might be a newbie, or you might be a pro. Either way, you're out for a bit of fun. The pull of the bright lights of the tengu soap street is too much to resist. A quick chat with the doorman at the Kiwi-no-Machiawasebasho is enough to get you past the entryway. Little do you know that that there's a surprise waiting for you. What will it take for you to enjoy yourself to the fullest? It's up to you to decide!

After today, China Grove will never be the same...