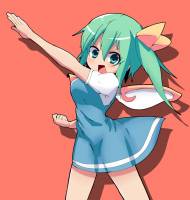 One day, as with most of the incidents, happenstances and unusual circumstances, Yukari thought she had a good idea that involved an ice fairy and a certain border - it happened to be the first day of April, after all.

What she didn't think of, however, was a sudden snowstorm, the biggest snowman ever made appearing near the Misty Lake, raining icicles that made things worse for ferals, a well-organized army of fairies laying siege on the vampire mansion and winning, local variation of "Stars on Ice", furious sunflower youkai getting defeated quite spectacularly, the kappa getting a master-class in igloo-making, the founding of a relatively successful ice castle amusement park, an impressive sculpture of a giant robot from the outside world made out of a giant ice block, the dreadful, yet curious possibility of this fairy becoming a minor god and a shrine maiden getting a cold and dealing with this almost a week later.

Before me, I saw a right feisty little ankle bitea. A fairy, goin' on what I'd 'eard.

Probably slang for must. Must get real aggressive!

Now, if they're anything like a saltwater croc, ya just gotta clamp the jaw shut and get them on their back.

Now, I don't 'ave any tape, so I'll use me mouth, just in case they're more like wolves. Y'see, canines voi for dominance by puttin' another's snouts in their mouths.

Ahh, she's strugglin'! What a foisty girl! Ain't she a beaut? Her wings remind of a buttafly, or some otha kind of winged insect. Never seen a fairy before, but I was told that if you pat their head, it calms 'em roit down.

Look at those big ol' beautiful wings swing! She must be troyin' to get away! If they're anything like a croc, that means coverin' the eyes'll calm 'er roit down!

Thankfully I prepared a blindfold just fa this.

She seems pretty out of it. At this rate, I'll be able ta toi 'er roit up and bag 'er easily! Just gotta pin 'er. Won't be easy, what with not havin' a team, but oi've gotta do it. Fairies must be an endangad species, with 'ow much oi've heard they're killed fa bein' a nuscance!

There. That's one fairy daon, and that jost leaves 'oweva many more oi can foind!. Then oi can start breeden' 'em in captivity! Gotta repopulate 'em before it's too late.

"Yup." Cirno, whose skin was tanned (because why not) sipped on her iced mocachinoalolate, reflective shades giving her the appearance of being calm, cool and collected. But no, she wasn't cool — she was downright pensive. Here she was, coming to a shit show with nothing but a picture of a turd.

Wriggle scoffed. "Is that the best you have?" While Wriggle was her good friend — one of her best — she was far from a good friend. Cirno knew she had to up her shit game or have her shit pushed in.

Cirno calmly (but not really) sipped on her iced coffee amalgamation. "Yup." Seriously, what was she thinking? To bring a picture reeked of shit, and she knew that this shit would, indeed, not fly. If only she had a catapult...

Daiyousei wrinkled her nose. "This lack of stench is inappropriate, to say the least." She might be her best friend — her very best — but she was right. Without a properly smelly turd, shit would hit the fan before long. She had that snooty look of a teacher with an entire forest crammed up their ass — you know, like Ms. Hugename.

"Guess so." Cirno slurped on her shitty drink of a too-long name.

Doremy smugged. "But look at it closer. It has a thick sheen of grease unlike anything I've ever seen..." While Doremy was her best acquaintance — her very best — she was far from a friend. She had that horrible smug on her face, that told everyone that she was better. But, at least right now, that didn't matter. She was a judge, and she seemed on her side.

"Thanks. Made it myself." The consistency of the beverage in her grasp was taking a turn for the worst.

Letty scowled at her. "Who enters turds in a contest? You'll never amount to anything. You're no daughter of mine!" While Letty was her best mom — her only mom — she was right. They weren't even slightly related.

Keine butted in. "Put on some pants!" While Keine was her best teacher — which was by force — she had a point. ...Wait, what?

Cirno bolted upright. "Ohh, thank goodness... It was just a dream..." She wiped her pale brow of sweat. Her forearm was also pale. Good "...What's that smell?" She sniffed at the air, quickly realizing the stench came from the bed. Throwing off the sheets, she began to scream.

Someone took a shit in her bed while she was sleeping.

She did not have a name.

She enjoyed dressing up for the occasion. Today, she donned her pasty-white makeup and halo. She didn’t even mind the bullets racing past her as she waltzed up lazily in the air, returning floaty, cerulean bullets of her own until she was struck dead in the chest and exploded in colorful, incandescent stars. It made her a little sad—now she’s dead and must wait her turn to wake up.

There was some part of her that gleaned a little bit of joy whenever she struck someone with her bullets. Not that she loved shooting people, but hitting the plucky shrine maiden made her feel special, like she was in a play, acting as the villain. She’d much rather be the heroine, but she knew how to compromise.

Days passed, months too, then years, and she still did not have a name.

Sometimes, she worked as a maid. She wasn’t sure what she did, but nevertheless, she was a maid. Occasionally, the Chief Maid came to help, and maybe scold everyone, and bring snacks. She loved the Chief Maid very much and, on multiple occasions, have called her “Mama” even though she was maybe a thousand-and-some years older—and every time, she blushed the same.

On days she felt particularly intelligent and sophisticated, she enjoyed pretending to read the books in the Great Library. It’s not as if she didn’t know how to read, but the books there had words several levels of complexities above her vocabulary. Sometimes, she felt incredibly stupid and ashamed and sometimes, she felt like she could understand it—after maybe another thousand years.

Maybe it was because she couldn’t drink bitter coffee, since all the intellectuals she knew, namely the Librarian, drank their coffee straight, but her stomach had no capacity to drink black tar. She much preferred the sweets that the Chief Maid often brought, especially those tiny gumballs that fizz in her mouth.

She tried coffee again and, surprisingly, it was not as bitter as she remembered it to be. Still, it burned the roof of her mouth and was not nearly as pleasant as cream-and-five-sugars—she thought that as she smiled and giggled to herself, swaying the cup in her hand, thinking of things that were once bitter but not as bitter as before.

One day, she will conquer coffee—but she’ll wait another thousand years on that.

I dislike this on a level I didn't realize I could dislike fanfiction. Congratulations.

Absolutly not. It's very well done.