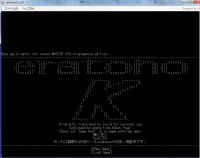 Thought I should spread the word that this gem is being translated on 8ch. I'd recommend scrolling to the bottom of the thread to find the most recent translation

>what flavor far too many versions
.207, according to thread
Includes th15 touhous
I'm ignorant of the other versions, I just saw the translation thread and thought it worth sharing.

The translation thus far makes it quite possible for non-jap speaker to play it, though plenty of crap has yet to be translated. Translation is very active though.

Anonymous  2016/09/27 (Tue) 11:10 No. 38080 ▼
Delete Post
Report Post
So with persuasion what do the bars mean? I've been trying to figure this out as I got a lot of people under house arrest and for a while under people who got varying purple bars but I got no clue what's going on.

The outcomes between phases being untranslated doesn't help either...

Anonymous  2016/09/29 (Thu) 06:11 No. 38081 ▼
Delete Post
Report Post
I do appreciate the necessary translation of the UI and mechanics. Although I'd like it if just a few more of the daily/battle/character events were translated. It's a bit of a mood/time breaker to stop and figure out what's going on.

I'll run through more of this game with some translations of my own and see if there's some interesting content. Even if it is small translations of battle quotes and whatnot.

Id recommend searching 'era games' in the /hgg/ catalog to find newest threads in the future.

EraMegaten and EraGVT, non touhou related, are also being translated.

EraGeneral is the thread to check on 8chan /hgg/ if youre interested in giving it a go or helping out in the translation effort.