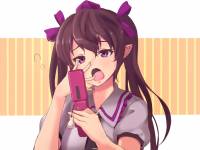 You wonder to yourself when this became routine, feeling your legs move you toward your destination.

That is, the abode of one Hatate Himekaidou, a crow tengu such as yourself and a recently formed friend. You get the feeling that any such friends of hers would be categorized as recently formed, with her habit of staying inside all day. If it weren't for the rivarly with that other reporter girl, you suspect she'd not leave at all.

Your thoughts are interrupted as an obstacle impedes your progress - that is, the door. Fist clenched, you raise it toward the door, before letting it fall back to your side. Instead, you grip the knob and turn it, pushing forward. You're left unsurprised at the lack of resistance, taking a moment to excuse yourself in.

Slipping off your geta, you call out for your fellow tengu.

"Hatate, it's me. Here for your daily check up, wanting to make sure you're not dead or anything."

Not waiting for a response, you move further inside. Dust kicks up around your feet as you move, making yet another imprint on the floor. There's small lines clear of it, others in the shape of a hand. Feeling the impulse to slam your head against a wall, you force yourself to look away. Hatate's room is coming up anyway.

A sign hangs on the door, the wooden engraving clean and proper. Underneath is another, this time just made of paper, with a little doodle of the creator's head in the lower right corner.

Promptly ignoring this, you open the door. You're forced to notice is that there's absolutely no lighting in here. Letting out your first sigh today, you step in, closing the door behind you. You strain your eyes, only barely making out a silhouette in the darkness.

"If you don't say anything, I'll just take that as affirmation that your rival is so much better than you and like, totally well informed."

Seeing as you haven't been yelled at, you get closer, stomping on the floor in the meantime. You're practically next to her now, crouching down to get a closer look. You have to admit, she's pretty cute like this.

That doesn't stop you from flicking her on the forehead, causing her to hiss and bring a hand to it.

"Damn it! Why do you have to do that every time?!" She glares at you as she nurses her injured forehead. She looks even less pleased when she sees your smirk.

"Because otherwise you don't wake up. Haven't I said this before?"

"You know I'm not sleeping!"

"Then whose photos were you stealing?" You ask, sitting your ass down next to her. Your legs were getting tired.

"It's not stealing!" She retorts, letting out a big groan.

"So, gonna tell me what it was you were looking for?"

Hatate shifts in place, eyes darting between you and the door. Biting her lower lip, she lets her hands move to her lap with an over-exaggerated sigh. "Alright fine."

"Cool. This wasn't for one of your fetishes again, was it?"

With a roll of her eyes and a cough in her hand, she begins proper. "I was asked to look into an event. Apparently there were photos taken but only a few people were allowed to actually see anything."

Your eyebrows rise. "Who asked you for what now, exactly?"

Your eyebrows rise higher. "Who?"

"The wolf tengu - that's not even important! The point is is that a tengu's been murdered!"

The smile you didn't know you had falls from your face, turning upside down. "Ah."

This time Hatate's the one raising an eyebrow. "No witty remark?"

"Someone died. What am I supposed to say? No, the strange thing is why you were asked to look into it."

Her eyes move to the floor, the girl before you swallowing. "That's because it's being covered up."

[]You're fucking with me.
[]By who, exactly?
[]Didn't take you for a conspiracy nut.

Of all 2hus, she's the most likely to be one.