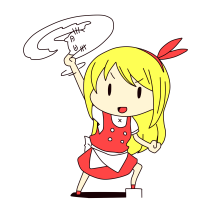 You decide to do as the mysterious little paper says, because you don't really see any reason not to. It's not as if you expect to turn around and find someone or something just standing th-


No sooner do you think you won't find something standing behind you, do you turn and find that something actually is standing behind you! A strange something, at that! A something that looks an awful like a large, lumpy pillow standing upright. Though rather silly looking, it's still surprising enough to cause you to jump back a little bit.

Just a little bit, though.

You quickly calm back down, and the more you look at it, the sillier the silly pillow-thing is. It's got a silly little face on it with a silly little mouth with a silly little tongue sticking out, like 'BLAH, I'M STICKING MY TONGUE OUT~!' and to top it all off you think you detect a faint whiff of magic coming from inside it.


The magical pillow monster waves its blobby little pillow arms in the air while making more 'OOoooOOOooOO~' sounds. You think it might be trying to sound scary, but it's actually kinda cute, like a little kitten hissing and acting all big even though it's so very, very tiny. The way those wings behind it keep flapping is also pretty cute, but why does a pillow have wings?

In any case, it doesn't seem dangerous, so why not try to talk to it for a little bit?

“My name's Ellen! Fluffy Ellen! Who might you be?”

“Oh, u-um, uh, it's nice to- er, I mean oooOOOOOOoooooOOOOOOO~! I'm a ghoooOOOoooOOOoost~!”

“Really, a ghost? Wow, I thought you were a funny pillow or something.”


Oh. Huh. You guess it's a ghost, then. A kinda funny-looking ghost, but if it says it's a ghost you guess you should take its word for it. Even though it doesn't smell like a ghost. Or look all that much like one. And you can't see through it like you would expect to be able to from a ghost.


The funny pillow-ghost waggles its lumpy arms and flaps its little wings some more in what is apparently its best attempt to be scary. It's not doing a very good job, you think, but maybe you should play along? If nothing else, it certainly seems to be trying hard, and you don't think you'd like to make it feel bad. It's just too cute to make it feel sad. You almost want to just pick it up and squeeze it and take it home to cuddle with it.

Then again, this isn't getting you any closer to finding what happened to your shop, and that kinda makes you feel bad, too.