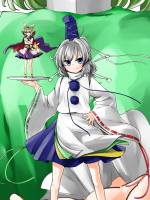 "... A world where every human may take a chance to cling onto their own density, a world where humans may explore this wonder world to their hearts. YES Hijiri that is the world I desire! Under Taoism of course." The elegant and charismatic one and only Crown Prince exclaimed!

Art thee words that were most likely being said in the room behind me. As for I, thou might wonder? hmph! The most brave and courageous job, of guarding thy door! yes this noble job of mine, is however in constant threat. As right beside me is a fearsome yokai. Or should I say YOKAIS, yokies?... THE POINT BEING the nerve of this despicable temple have brought two beasts to this meeting of thy's, THAT THEE CALLED FOR, is utter BULLSHIT

But if its thine own fate to be fallen in this hallway protecting the Crown prince's chamber THEN IT SH--" soooo hey Futo." huh?? Thy Yokai with blue hair and for some reason cloth covering thine beautiful sky texture haired is speaking to one? Thy other Yokai which seems to be asleep to A UNTRAINED EYE hast not moved a muscles, or more to be precise not moved a cloud.

" Thou wishes to speak to me?"

BANG
"Alright Futo pack your things and lets leave, this was a complete waste of my time,much like Buddhism of course." The number one and only CROWN PRINCE said as she burst out of the room, were'est the wretched devilish monk than began to scream as loud as a monk usually screams.

"Do you really want to do this? Miko? ... after what you said there will only be one of us standing. do you truly mean exactly what you have said?"

"I MEAN EXACTLY WHAT I SAID, if you and you little companions of yours don't beat us 3 Miko's mikoes? at the east top if Yokai mountain, at the end of this year, your dream shall never bear fruit. Not that it had any chance to begun with of course".

*inhales*"ok one since when did you make an alliance with those 2, two, if I win, WHEN I win , I assume you shall fulfill your bargain?"

"when I win, when I win HAHA, when I win... you make me laugh much like Buddhism of course. Hijiri you couldn't beat the red and black shrine maiden nor the green and white one, what any hope do you have beating us all 3 together?"

"I assume you hold up to your promise of the bargain?"

"Great and that's why I love you, your really one of the only ones here who talk things out"

"AS A RIVAL, MIKO I LOVE YOU AS A RIVAL, A GREAT ONE REALLY." *exhales*

"It seems we've come to an agreement, alright Miko, this meeting shall all be confirmed with our words and Buddha looking over us with no lies present I declare the words in this hallway shall all be fulfilled"

-December 31 two Parties one with Byakuren Hijiri and the other with Toyosatomimi no Miko whestes Miko's party shall be stationed at the east top of Youkai mountain.

"And with that I shall be off. Ichirin tell Shou she's in charge, don't trash the entire temple... and Miko don't die, i'll show you this heaven that you hermits wish to achieve."

"Wait!, where are you going? Hijiri!" The yokai in blue with the cloud guarding beside her, blurted out. As the monk had begun to put on her traveling outfit.

"Look I have been separated with you all for hundreds of years, a couple of months is nothing alright."

"trust me Ichi... I'll be back and the Taoist's are going to get everything they deserve."And with those the nameless monk spreading the words of Buddhism leaves onto the road footsteps echoing through the night........

"Futo it appears you don't know the situation."

*gasp* "HUH? Is something wrong with thy situation?". We have just basically declared war against the Buddhist's, gathering information is of most priority, that is one of the Honorable Crown Prince's most important laws. I do not comprehend the Crown Prince thinking.

"Hahaha, think about it. Hijiri is gone and know our biggest threat the Buddhists leader is a tiger with an alcoholic problem"

AS EXPECTED OF THE CROWN PRINCE!

The easiest way to win a war is to have won the war before it has begun.

"But what if we lose thy main and only fight?"


[x] I Futo shall follow wherever the crown prince goes!

*Orders from the Majestic one and only Crown Prince! (not in any order or rush)

[x] Prepare the Yokai mountiain for Thy Crown Prince arrival!

[x] Get the Yokai of gap's Phone number.

My first post :/ I realized it was torn between going 1pov and 2pov and thought i should scrap it, but not doing anything wont get us anywhere!
Was going to do a Futo 1pov only, but Miko's and Hijiri's back and forth broke me and I had to write it out. Any critique is thanks.