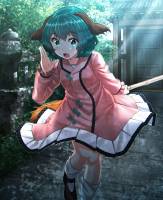 He apologized first to the girl. “Sorry,” Kigaku mouthed to Kyouko.

“Sorry,” she echoed as the prophet bowed in shame.

“No—um. It’s alright. Really.” The book-girl shrugged in resignation. “I’ve memorized the contents, more or less. And it was only a matter of time until something like that would burst into flames, so it was only inevitable.”

“And why would that be the case?”

“Because,” she said, her orange eyes falling onto the yamabiko. The girl was half a word into her next sentence until she cut herself short, instead muttering to herself. She hunched over, and, as if the prophet and his companion didn’t even exist, she circled around, mumbling non-words all the while.

“Um. Hello?” Kyouko took a nervous step back and retreated to behind the prophet. “I’m not liking this, Ametsuchi.”

The man silently agreed. It was not just her demeanor, either: Both the prophet and the youkai sensed malintent. And though the book-girl seemed innocuous at first glance, a spell of malevolence took to the air around her.

Kigaku nodded to his assistant. “Excuse me. Miss?”

Kyouko relayed, though her voice barely carried over—she was busy pressing her face into the prophet’s back, cowering all the while. But no amount of decibels would have swayed the orange-haired girl: She was entranced. This was an unfortunate setback for the prophet—he had prior business with the bookkeeper, so he decided to take matters into his own hands.

The prophet opened his lips. ‘Miss,’ he mouthed.

The girl stopped in her tracks, her glazed eyes turning to the man.

‘Forgive me, but I’ll be intruding.’ He took a step forward, and, delicately, the prophet put a hand to her left shoulder.

She recoiled, jumping back at the man’s touch. The girl looked like she was a moment from screaming, but instead, gray haze was forcibly expelled from her mouth. It materialized into a shape, vaguely human, but also not. The thing writhed in the air, creeping closer towards the prophet. It was wild, frantically moving its appendages in an effort to relay. The two, both beings with no voice, communicated.

‘This is mine,’ it said. ‘I have obtained it. Do not take what is not yours.’

‘Go,’ insisted the soundless Kigaku. ‘What you have before you was unjustly seized. Leave this place and be judged by the denizens of the underworld.’

It fell, though not by choice, into the nether. And before it sank into the earth, it clawed before him. Had it a voice, Kigaku believed that it would have cried for vengeance. But what he had granted the being was mercy—or at least to Kigaku, it was.

The man exhaled. His voice was still sealed, but its power, though dormant, remains true. To spirits and unlistening beings, however…

[ ] Kigaku let those thoughts perish. He would not meddle more than he should.
[ ] Kigaku kept the incident in mind—It could prove useful for Hijiri.

Anonymous 2020/08/18 (Tue) 07:50 No. 42984 ▼
Delete Post
Report Post
Useful for Hijiri in case she also wants to manipulate the cute, completely innocent bibliophile for her own benefit, you mean.

[x] Kigaku let those thoughts perish. He would not meddle more than he should.

Mums the word and all that.

Kigaku let those thoughts perish. He would not meddle more than he should. Were it a decisive matter, he would detail what had transpired, but what remained fact was that he held no voice on the affairs of the Myouren, literal or otherwise.

“Are you okay, miss?” Kyouko said.

The girl wobbled forward, almost toppling over. Within arm’s distance, the prophet easily caught and steadied her.

“Ah—yeah, yes. Thank you. I’m, uh, okay,” she said, though her quivering legs told the opposite. “You know how it is: Accidentally open up a daemonic tome, suffer perilous consequences. Not too bad, once you get used to it. Had it under control… mostly.”

“I don’t mean to disparage you, but it did not look like the situation was ‘under control.’ Left unchecked, the spirit would have taken your soul, your life along with it.” Kigaku nodded to Kyouko, who relayed the information back.

“Believe it or not, worse has happened to me. Usually, everything works out. I mean, sure, the last time, I may have almost set the entire forestry on fire, and the shrine maiden might’ve had to step in several times, buuuut that happens few and far in between.” She jutted out her chest in confidence. “I’m still alive and kicking!”

“…Nevertheless, I shall pray for your health and safety. That aside, we are here for other matters. We would like to request your help looking for a book—as was recommended by Hieda.”

“And I’m Kyouko!” the yamabiko added afterward. “I’ll be translating for him.”

The bookkeeper opened her mouth as if to say something, keeping a pensive eye straight at the yamabiko youkai. But instead, she shrugged and turned her attention to the man. “Alrighty then, Mister Kigaku. Let’s get you settled. If Lady Akyuu sent you here, then I’ve a good idea of what you want. Just follow me inside, and I’ll go grab it for you.”

Along with Kosuzu, Kigaku entered the modest bookshop with his resounding companion. The interior was well-kept—contrary to his expectations. The prophet, his prejudices broken, felt ashamed at his own thoughts. The man imagined a dusty storehouse where pillars of books would obstruct both his sight as well as his steps. The books found inside were instead tucked neatly into their own shelves, with only a handful of unorganized books laid askew on top of a corner desk.

The prophet took a quick glance at the book before abashedly shielding his companion’s eyes with his sleeve.

“Wait, what? What is it?” the yamabiko whined.

Kigaku waved the book around in exasperation. Its cover of the book read, “A Lusty Night With The Wolf Tengu.”

Already distracted by further pursuits, Kosuzu did not notice the man until the book’s explicit cover obscured her entire vision. Then she realized… albeit slowly. “Oh,” she feebly said. Ashamed, she snatched the book back quickly, blushing all the while. “Yes, um. That’s mine.”

“...Yes. It is.” The prophet had only enough reply for a tired acknowledgment, though it was rendered under a muffled yamabiko’s voice. He removed his sleeve from Kyouko, shaking his head at the bookkeeper all the while.

At the very least, Kosuzu worked with quickness in mind. No more than a half a minute passed when she returned, still red-faced, with the Gensokyo Chronicles in her hands.

As she thrust it over to Kigaku, she added, “And that’ll be no cost on you. It’s the least I could do for my savior. And, um, if you could keep quiet about our little… incident to Lady Akyuu, then I’d be all the happier.”

The prophet, in lieu of a worded response, sent the girl a weary gaze. But slowly, he nodded.

“So...um, anyway!” Kosuzu said, eager to move onto a more engaging conversation. “How’d you explode that book? Seems like you’re not just some ordinary guy—especially if you know Lady Akyuu, eh?”

“As a devout prophet, the mere touch of a follower of Bishamonten can purify the unholy. Should you have any more of those cursed books sealed away, I could dispose of them for you.”

“‘Dispose’? Oh, no, no, no no no!” she stuttered. “That would, um, be too much work, and I wouldn’t want to impose on you, and you know how it is with demon books, they’re artifacts worthy of research, and we could do that some other time… yeah.”

“It was merely a suggestion.”

“Could I ask for some help if things get, ah, a little hairy?”

“If you so need it. Should you come to Myouren, I would be more than willing to come to your aid.”

“I’ll try not to be too much of a bother!” she said, beaming unapologetically at her savior. “So yeah. Anything else you need?”

“That shall be all for us. Thank you for your time.”

“Come again soon!” she hollered. “But not too soon! I have inventory to sort out! And not that kind, if you’re still thinking about what happened!”

“Again. About what?” Kyouko asked, still curious about the incident.

“Nothing! Nothing at all!” the girl yelled, pushing the two out of Suzunaan.

With the Gensokyo Chronicles in hand, the man was tempted to skim through it immediately, but he could always do so at night when Kyouko was not waiting on him. Instead, he stood there at the crossways between the village road, musing over the days since he was sealed.

It was a delicate subject for the prophet—the seals were shackles that which bound him to countless centuries of an endless void.

The first of the seals, the relic Yata no Kagami, was deemed as his eternal mausoleum. Were it not for Hijiri, he would have been forever lost to time feeling, thinking, and being nothing. While Kigaku would have preferred to forget about the old relic and think less of his time staring into darkness, those at the temple insisted that he claim it as his own, so he shall—for their sakes.

The Yata no Kagami, though, was but one half-partition of the set. The second and last of the seals, the Yasakani no Magatama, housed his power—his voice. It was of less importance, for Kigaku no longer wished for the burden of the divine. Still, the man felt responsible for the magatama: Its power was his, and so its use—or more so its misuse—would not sit well with the prophet.

He knew of one seal. Its other half, however, was not yet known.

[ ] It would be found in due time. So Kigaku returned to the temple.
[ ] He would not wait. So Kigaku went back to Hieda to ask about the Magatama.

Anonymous 2022/06/19 (Sun) 03:04 No. 43528 ▼
Delete Post
Report Post
[x] He would not wait. So Kigaku went back to Hieda to ask about the Magatama.
Okay, I caught up with this whole shebang and now realise that there's a lot more going on than I remembered. Still curious about his whole deal with the temple, but boulli-ing Akyuu takes priority. Besides, she looked worse for wear, and it might be a good idea to save her from herself.