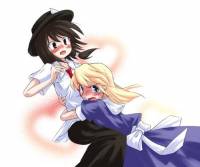 This may come as a novel idea but if Anon starts writing in obviously retarded/trolling choices you don't actually have to pay attention to them.
Anonymous  2008/06/13 (Fri) 00:58 No. 11504
[X]Night Talk - Bronze Lover
Anonymous  2008/06/13 (Fri) 01:01 No. 11505
I don't think choosing Mary's room was the damning part. That could have been salvaged, with the added bonus of hilarity. Dicking around afterwards kind of screwed us over.

As much as I'd like Nanaya to spend scene after scene staring girls in the eyes and declaring his love for both X and Y, but then only for X, but maybe sometimes for Y or Z, I would also like to advance the plot.

Maybe one of those 89 flags we didn't trip in TRANSPARENT NIGHT will do that? Maybe telling Reimu the reason she feels "weird" around us is Yukari? Maybe we'd want to ask why she'd help Yukari back to Mayohiga when she just had Mima killed, instead of incinerating the corpse and sealing it? Maybe talking Renko or Reimu on Mary's increasingly Yukari-like behavior? Maybe telling Ren we have enough room in our heart for more than just one person and that she does too, instead of axing our previous declarations? Maybe some knife training to bring back Ren's sense of purpose (protecting and anchoring Mary) rather than letting her cling to Nanaya in substitution, breaking the group dynamic?

Here's the play-by-play: We select or write-in something CRAZY (go to Mary's room) because we're bored with the rate the plot is progressing, and you start pouting because you wanted Anonymous to pick the option you wanted and make a comment, and then we go "oh noes the GM will drop rocks on us", so even though you managed to work some positive options into the next scene (in Mary's room), we're now backpedaling midway through kicking logic & reason to the curb (running from Mary's room), which is even harder to write, so the next time Anonymous tries it (go to Reimu's room), you're so pissed you don't leave any options that work and start with the negative reinforcement (in Reimu's room), which makes Anonymous despair, so then you have to cheer him up to advance (Mary at the door), but when we don't go for the H-scene (refusing Mary), you're so frustrated that you land-shark us with a hastily-written possessed Mary Bad End, no continues allowed.

Seriously, you could've saved it by allowing Nanaya options there. Besides the do nothing option, you should be able to spit in her eye, rip throat & crush trachea between our jaws by using a kiss as a feint, or even just headbutting her to ruin concentration on the gaps and then use the kitchen knife to slice her into 17 pieces, leaving us to bleed to death, have the situation be misunderstood by the Miko and get spiked, or go simply go NANAYA TRUE by realizing he's killed Mary, while Yukari is still going to regenerate (which would explain the lack of continues).
YAFKTY@SCHOOL !nmVOHsTRd. 2008/06/13 (Fri) 09:09 No. 11521
>>11519
>comments that we should pick a specific option

Where exactly did I say that? Besides, if I really wanted to railroad, I WOULD do it. Hell, why do you think I went along with those ridiculous write-ins instead of saying 'fuck you ima writan that Renko H-scene'?
Because it's fun to write all the ridiculousness. Plot's lookin slow? Yeah, that's because you FINALLY went for some action instead of time skippan activities all the time.

>cheer him up to advance (Mary at the door)
Cheer up? No, just the opposite.
And, both options in that scene were leading to a BAD END. They'd just vary a little.

>but when we don't go for the H-scene (refusing Mary), you're so frustrated

lol no
Well, it is true that I thought anon would succumb to despair and run into the forest (thus getting a gruesome Rumia end), but to say the truth, I was kinda HAPPY that despite all the ridiculousness, anon chose to accept Mary's feelings.
That it led to a BAD END?
Well, it was planned from the very beggining. Besides, I don't suppose you would like to continue the game (which you just lost) in that state? (awkward moments with Renko and Reimu, etc)

So to summarize, the only grief I'm feeling is that anon planted in me by successfully avoiding Renko H-scene.

Well, that's that. At least now I have a chance to write some Reimu goodness.
Work will resume when I'm back home, that is in 2-3 hours.

Reimu doesn't know about that. Do you remember a certain dialogue she had with Renko (which the latter told us about)? To her, Yukari is still a victim, not the mastermind behind all this.
SettingsAppearance [X]