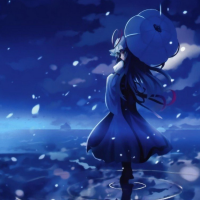 It was nice to be alone. You get to see all kinds of things in a different light, when not under the influence of someone else.

Like, have you ever looked inside of one of Yukari's gaps? Inside, inside, not just looking at the Eyelid from the outside like it was a macabre painting. It's like its own alternate dimensional space that Yukari used for surveillance and the like.

This was where she actually went during her "Winter hibernation." She just spends maybe 3 months spying on everything and everyone in Gensokyo.

Like she was currently doing, despite it not being winter. Her eyes flickered between a dozen gaps in front of her, each showing parts of Gensokyo instead of the more familiar purple void. Though, one of them actually was a voided gap. And... it seems to have caught her attention, as well.

She grins like a champion about to receive their prize, striding over to a seemingly random spot in her world. She reaches out a gloved hand and- Hey, hands off lady! No! That's not-

Apologies, but I need you out of the way temporarily for what I wanted to do. No worries, I'll release you shortly, just let me finish what I want to do.

Hello there. You. On the other side of this... Boundary? No, not quite. Something similar to a boundary. A veil between worlds. A border. A... A screen. That's the proper term, yes?

Well, I suppose it would be difficult for you to respond. The... screen, as far as I can tell, can only transmit information one way. Thankfully, it was obvious enough that someone's been paying attention to us, been... pulling strings, as it were.

Despite popular belief, I'm not as all powerful as I make myself out to be. I can come close, but its all smoke and mirrors. Over a thousand years, and I still find out new things about my powers almost every day. Every time I think I've found an upper limit, I break that limit a short while later. Days, weeks, months... years, sometimes. Ran was a particularly slow going process.

I'm sorry, I'm rambling quite a bit, aren't I? Perhaps one day I'll be able to hear your voice from my side of the screen. And, quite frankly, I miss being able to talk like this. Reimu's no fun, and Yuyuko is unable to join me on my escapades.

Even Ran... Well, as a Shikigami, she isn't the best at casual social interactions. Thankfully, Chen is helping her with that. Chen's good for her.

I'm sorry. I should get to the point, shouldn't I?

I realize that, for all my powers, for all of the myths and rumors surrounding me, that I'm quite powerless in your eyes. Even now - Especially now, I'm at your mercy. The outside forces, on the other side of this screen. Your thoughts, that turn to words, that turn into actions.

I suppose I should be angry about my seeming lack of free will, but... I'm not. How can I be? Gensokyo has always been a hard teacher of there always being a bigger fish. I have found the bigger fish to myself, is all. The bigger fish to all of us, really.

Speaking of us, I have a request to make. Several, actually, but mainly this one.

Please, take care of us. We're only people trying to live out our lives, meager as they may be in the grander scheme of things. Reimu, Yuyuko, Ran... Even my 'rivals,' like Kasen, or Okina.

I ask on their behalf for mercy. For, at the very least, for us to make it through whatever plans you may have. A reasonable request, I'd hope.

I've never seen Remilia quite so distraught. Not since her Sister was confined to the basement. Not even Reimu's victory over her bothered her quite this much.

Well, that'll be all. Please excuse me while I free our indisposed Narrator from his bindings.

An interesting person, this narrator. They cast their name off a long time ago. I know of their old name, of course, but it's not my place to say. Whether or not they tell you is their decision, not mine.

Yukari slips through a larger gap, this one leading to the Hakurei Shrine, from the looks of it. She offers a jaunty salute on her way out, closing the gap behind her. Without her presence, the alternate dimension falls silent, the reddened eyes closing one by one.