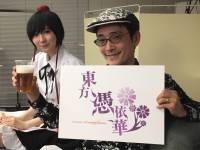 Welp, it looks like we've got another Tasofro game coming. More urban legend shenanigans for everyone!

Anonymous  2016/12/11 (Sun) 21:16 No. 14519 ▼
Delete Post
Report Post
>Antinomy of Common Flowers
It most likely refers to that one issue of WaHH where Yukari mentions wild dandelions that grow anywhere and anywhen and gensuukyuu's dandelions. Most likely it's gonna be an "X invades gansoko!" kind of story.

It could also be calling normal human women "flowers". Maybe the human village's belief that humans should remain humans will be shaken by a wave of humans becoming youkai.

Who Reimu will then obviously kill, assuming Kosuzu isn't among them.

also is that zun's wife on the left

I loved SWR and UNL. The new fighting style disappointed me and so did the expansions. If they're gonna keep that style, I won't even bother.

That said, looking forward for the background gifs.

Aya's his side chick.

Huh. Google translate seems to think Inuyasha is on the list...