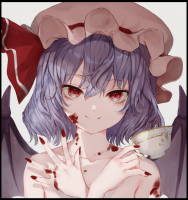 If so, might you have any idea as to where she is from? Anything about her heritage? I must know—I am dying to know.

Except the Chinese, I guess.

I happen to think she's Burgundian. They were just the sort of fabulously wealthy you might expect to produce such a lovely and refined daughter, and the Cross of Burgundy is just too cool not to feature on her heraldic arms.

She does have heraldic arms, doesn't she?

I hope she feels all right about it now, if it does—if it did—you know what I mean.

Anonymous 2021/10/05 (Tue) 03:13 No. 24873 ▼
Delete Post
Report Post
Breaking kayfabe: I really don't know if I hate the idea of Remi being a frog or of her being English more. Either one is dumb. I really don't even know where the former comes from, and the latter isn't one I see floated around in the English-speaking fandom a lot, but it feels like an assumption in the Japanese.

Anonymous 2021/10/05 (Tue) 03:26 No. 24874 ▼
Delete Post
Report Post
>>24873
The former just comes from the romanisation of フランドール as "Flandre", I think, and maybe the fact that Rémi is a common French forename (albeit for men). With regard to her being English, she is at least literate in English as seen in FS; although probably for the same reason as the resting Japanese assumption, that every foreigner is an Englisher unless otherwise specified.

My personal belief is she had to have settled for at least some time in England or its colonies in the past two centuries, though she was probably not born there so many hundreds of years ago; and that ancienter past is what I care to know.

My guess, though, is seriously that she's Hungarian in origin, ultimately. Vlad Tepes was a Magyar aristocrat, and the whole concept of vampires is pretty hard to separate in popular consciousness from Ol' Drac.

Anonymous 2021/10/05 (Tue) 03:48 No. 24879 ▼
Delete Post
Report Post
>>24876
French Belgian could well be Burgundian, insofar as the County of Flanders was part of the holdings of the Burgundian Netherlands. And as for the whole thing around Tepes, it's for that same reason I think she has to be anything but. Picking up an unprovable hereditary claim based on modish associations after the publishing of a popular novel seems like just the sort of thing she might do.

Speaking of vampire backstories, it's the writer of Exile here. The way I came around to Kurumi's backstory is a little complicated—I had some sort of linguistic thread going in my head; "kurumi" means "walnut", and the word "walnut" itself literally means "foreign nut", "walhaz" ("walh") being the Proto-Germanic for "foreign" (Romance- or Celtic-speaking foreigners especially) and appearing in names like "Wales" or "Cornwall" or "Walloon" or even "Gaul". I don't know how exactly I got from there to thinking that Kurumi was from or lived in the HRE, though, other than that it was a convenient idea at the time.

I'm still thinking off and on about how to continue that story through to the climax I had in mind; it's tough coming up with all the colourful little bits that have to go in between the major beats. I may also have to rewrite a portion or two which should have been important but which I ended up just punting for want of time.

I've been thinking of properly reading Eschenbach's Parzival for more context (and thereby inspiration), but alas I just... haven't done it yet.

Funny enough, "walh" was also borrowed into Proto-Slavic "volxъ", more narrowly meaning "Romance speaker", and eventually became the root of "Vlach" and "Wallachia". I think it's a few steps too far to make anything of, though.

Anonymous 2021/10/05 (Tue) 06:26 No. 24889 ▼
Delete Post
Report Post
>>24884
That is a really cool train of thought. Discussions about vampires is always cool because I end up learning a bunch of tidbits about these Proto-Germanic languages like you've noted.

Anonymous 2021/10/05 (Tue) 10:36 No. 24896 ▼
Delete Post
Report Post
>>24876
Ol' Vlad was very much not a Magyar but a Vlach.
>>24892
In my own headcanon I like to think that there's a chance that's she's basically a no one who didn't have any sort of titles or even money. But she built it up quickly enough and then pretended that she came from a distinguished bloodline, both human and vampire as it were. So if you actually were to know about history and the finer things in life and accidentally pushed too hard it would make her sputter.

Phoenix Wright right her ass and get thrown into the meat dungeon for your efforts.

Where do most vampires come from anyway?

Anonymous 2021/10/05 (Tue) 11:36 No. 24900 ▼
Delete Post
Report Post
She is clearly British. Everyone in the Scarlet Devil Mansion comes from the Isles, except for that Oriental girl they deign to leave outside the gates.

Flandre
> Younger siblings getting the shaft is basically British tradition

>>24903
You will observe no such scandalous attire on the person of the Head Maid.

>>24896
Gonna be honest, I know absolutely nothing about the Vlachs. I just looked up Transylvania and the Wallachian princes.

And here we see the Burgundian bat wearing the costume of her people.