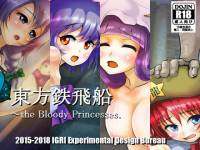 Hello /at/. I was browsing stuff on dlsite and discovered this touhou ero RPG. I tried MTLing the story with AGTH to see if it was any good, and decided to make a simple interface patch to make it easier to play. Since the work is "done" I might as well share it:

I say "patch" but I don't know how to properly navigate RPGMaker. I don't think it supports patch files, and when I re-exported the archive it was 100mb bigger. So I just zipped the whole folder. You'll need the RPGMaker runtime, but it otherwise should run as-is. It's also a newer version than what I found in a torrent.

This translates (most) skills, equipment that does more than just increase basic stats, and the basic interface. The battle log is a mess of English and Japanese since I couldn't be bothered to try and track down everything. If you're like me and can't read a word of Japanese, this should be a lot more playable, but it is far from finished, polished, or accurate. This is all MTL (plus some manual rewording) and I didn't bother to make sure everything fits in the dialog boxes. I haven't extensively tested it but I don't think I broke anything doing this. Probably.

The basic plot (as far as I can tell) is that an alternate world summons a hero to save them from evil - Flandre Scarlet. The SDM girls follow her to the other world but all get separated, and afflicted with "summoning sickness" - dropping them to level 1 (or 7, for Meiling, Remilia, and Koakuma). They must then reunite and save Flandre, and maybe also the other world from the demons that want to destroy the elemental crystals.

There are a few parallels to FF5, primarily the crystals and job system. The plot isn't anything exceptional (so far - I haven't finished it), and I can't tell if the story is well executed through the MTL haze. But there are a few points where I laughed, and I've been sufficiently interested in the game to make this damned patch, so there's that.

There's a lot of OCs, including all of the antagonists and some friendlies. The game takes place in an alternate world to Gensokyo, so the 6 SDM members that wound up there are the only familiar characters after the introduction.

The monster sex is weird. These gets full events with CG, but they're restricted to a very small number of specific miniboss monsters. Specifically, those with a star in their name (e.g. タランチュラ☆). In chapter 7 you're given an item that puts them into heat; if you knock that monster down to 50% HP and the girl that the CG is for uses that item, the battle ends and you go into the event. I don't know how you're supposed to know which girl to use other than trying all four. There's a story explanation for doing this, but you get the same item from beating up miniboss monsters you can't fuck, and I'm pretty sure each girl only gets one monster, so it feels rather tacked on. A shame, because it's not a bad idea.

Is the gameplay good?
Above average, I'd say. It's an RPGMaker game with some deviations, but not anything special. You get four characters in your party, each (eventually) has access to 2 jobs plus their usual touhou selves, and can switch jobs mid-fight. There's a variety of buffs, debuffs, and status effects so it's actually possible to have a strategy. It's a hell of a lot better than some ero RPGs I've played that boil down to "use regular attack and hope you have the bigger numbers".

All of this applies after chapter 5, at least. Each girl has an individual chapter where they're by themselves (Sakuya and Patchy get helpers, but that's still only two) and there's barely any room for strategy at this point.