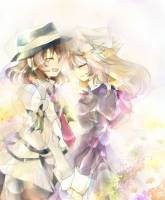 You know, I've been writing these letters for a year now. I know you won't receive them, and yet I write anyways. Isn't it weird? I feel like I'll never see you again, and somewhere, deep down I know that, and yet I still refuse to believe it. Gensokyo is my home now. Is that fine with you?

No, I can't stay the same girl I was, Renko. Thank you for being the shoulder I could cry on. I don't know how you could be strong, and even now, when I still struggle to stand on my own two feet, I look up to you. Thanks for everything, friend.

Oh, that reminds me! I met someone interesting today! She was an odd girl: She wore fruit in her hat, like the Chiquita girl on the bananas you like to eat. She introduced herself to me out of the blue while I was fishing, and I ignored her. I needed to focus today.

I thought she left, so I was surprised when she began talking out of the blue. "Why do you fish," she asked. "Why do you fish?" I never really thought much about that, so that's what I told her.

And then she said the strangest words: "When I fish, it's because fishing is life."

Grandfather always said, 'When you fish, the fish is life', so I thought that's what she said. But she said it again.

"When I fish, it's because fishing is life." Then she continued. "The mere act of fishing is unspectacular. You put bait on a catch and throw it into the water. If a fish stupid enough to try and eat the bait goes after it, then you catch it." I didn't have to look at her to know she was smirking; her voice said it all. "It's also boring. You can sit there, hours at a time, only to find out that you ended up wasting a day doing nothing."

"But fishing is enjoyable, is it not?" The sudden change in her tone jolted me, and I nodded my head dumbly, too surprised to say anything in response. My focus was now split between the bait and this mysterious girl whom I had only given a mere glance a moment ago.

"Do you know why?" Her question was thought-provoking. "It's because you have a goal. You could be fishing because you need something to eat. And you could be doing it to pass the time!

"But, no, you're doing it because you want to beat the record at the Human Village, don't you?" She got me there. I turned to look at her, completely taking my focus off fishing and onto this mysterious girl. Her clothes were no less fancy than her hat, having a rainbow dress-sash to complement her overall blue look. But her face was a different story. There was no way to describe it in words, Renko. She looked like a god. Her face radiated with brightness, her smile forced my cheeks upward, and her composure lifted my mood.

"Well, that's good! You have something in mind you want to achieve!" I felt a tug on my line, and I took my focus off her to try and pull in this fish. It wasn't long before it came in, and it was a good 4-pounder. I took the fish off the hook and threw it back in. I was looking for something much more.

"And that's why fishing is life."

Those words, Renko, have changed my outlook on everything. Those words: 'And that's why fishing is life.' I asked her to explain it, and she did.

"The future is like throwing the bait into the water. It's uncertain. You don't have any more control over it. You can prepare all you like, whether a little or a lot, but by the time the hook hits the water, there's nothing more you can do but wait." I nodded.

"If we don't embrace the future and make it our own, aren't we just throwing bait into a river, toying with the lives of others with no thought to the consequences?

"Find someone or something to love. Make that person or that thing a passion of yours. A goal that you can strive towards." I had to knowingly accept her logic. It made sense. And it also was too real. Renko, I struggled not having you with me. It's been a year, and even up to now I continued to worry about what you were doing, what I would do here, and everything else. This girl changed all that, and that's why I won't need to write letters to you anymore, Renko.

But, don't worry, the story isn't over. "If you believe in that goal, then stick to it. That is where you will find fulfillment. It isn't what others get out of fishing that makes it enjoyable to you. Don't be swayed by those who tell you what to do because they found success in it." This girl could read me like a book, Renko.

"We can take lessons from our experiences, and let that lead us to a surety: our future. A goal is a powerful influence." Another tug, and this time, this one wouldn't let go. She continued to talk.

"So, don't be envious if someone has a better goal than you do and reached it before you did. That's their goal, not yours. The future is only uncertain when you don't know what you want to achieve. You will never be uncertain as long as you remember that."

And then she began to sing.

"The surety of things long past hold tightly to my ear,
So why are we surprised that it's the future that we fear?"

The rod snapped, breaking in two. I instinctively winced as the upper half of the rod flew close to my face and scratched my right cheek, drawing blood. But I wasn't worried about that. I was worried about my catch. The girl began to leave, but she left me with a few words, similar to how she had started.

"Not everyone will find someone to love. But everyone can always find something to embrace. Search for it. Love it."

Suddenly, there was a large rock that came down out of the sky and landed in the middle of the lake, causing a huge wave. I panicked; I had nowhere left to run, and I was going to get caught up in it.

You know what the funny thing was, Renko? When I came to, I was back behind my ruined rod, with a 27-pound fish next to me, flopping, trying to get back into the water. If I felt pain from my cut, I never noticed. I grabbed the fish and sprinted to the village, leaving wet footprints in the dusty ground as I ran.

It's funny, Renko. One year has passed, and I finally think I'm ready to move on. Thanks for everything.

>It's funny, Renko. One year has passed, and I finally think I'm ready to move on. Thanks for everything.
>Your friend forever,
>- Maribel

>If you have a goal, keep fishing for it.
>You're no longer my goal; I'll fish for something else now.
>You won't even get my rejection letter.

>>21585
There's indeed a bigger story behind the short, but part of the reason for this short was about finding out my identity as a writer. The reactions I've gotten are proof enough as to where I should head. I might be able to write more regarding this in due time, but I'll have to either have more free time or finish TLDR in /underground/ first, which won't take long.

>>21608
Friendships take time to build, are easy to break, and hard to mend. It is one of the easiest ways to hurt, and the hardest thing to strengthen. And yet so many people seek out this elusive feeling, whether artificially or not. I will not confirm or deny the existence of, as you put it, "drunken lesbian sex", but even if you are not correct, you will be close no matter what.

Anonymous  2012/07/18 (Wed) 04:22 No. 21743 ▼
Delete Post
Report Post
An interesting short! The message was simple but applied well to the situation, and I can't help but wonder what else you'd write in relation to this. If you ever do write a story that is, in some way, related to this one, then please link to it here! I'll be all ears.