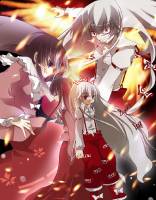 Again the alarm clock rouses you from your slumber. You curse it as you climb out of the warm futon and prepare to head off to school.

The trip to school is largely uneventful until you actually arrive at the school. As you enter the gates there’s a rather large crowd gathered off to one side. Curious, you head over to investigate. In the middle of this ring of students two girls are locked in combat. One has long flowing grey hair and is dressed in a boy’s uniform, the other a rather refined looking girl with pale skin and long flowing black hair. The two are screaming insults at one another, though you can’t quite make out what they’re fighting about.

Next to you a student sighs as she talks into her cell phone. “They’re at it again, Fujiwara and Houraisan, that is. No I don’t’ know what they’re fighting about, probably the same old thing. No I won’t take pictures! If you want pictures of it, you’ll have to come down here yourself, Aya-chan. Fine, fine. Goodbye.”

Another student near the outside of the ring of students suddenly shouts. “TEACHER!”

The circle starts to disperse quickly, leaving the two girls in the middle fighting. Nobody seems too interested in telling them to stop their fight, or warning them that the teacher is coming. The approaching teacher is one you haven’t seen before. She has short brown hair, and a single gold earring in her left ear. She’s dressed in a professional looking red dress, which matches her long red nails nicely.

Bah, the immortals get enough attention in the other GA as it is. I'd rather focus on other targets here.

Well, I wouldn't blame him if he did.

We chose to be a Bookworm, and yet when presented with an option that entails using the Intelligence that comes with it, and on top of that it calls for a write-in, and yet there's not a single taker? Considering how gung-ho Anon usually is for just write-ins, to the point that they'll make them even when they aren't asked for, this does seem strangely timid of him.
Kirakishou !UdzMmUq0Oc 2009/05/23 (Sat) 16:22 No. 87136
Kira's gonna be delayed a few days in writing. Last treatement didn't go well, so Kira's feeling rather down and out right now.

Also, I described the scene poorly. There's still enough students there that the teacher can't see what's going on, and the "TEACHER!" wasn't shouted loud enough to be heard the distance away that the teacher is, or for Mokou/Kaguya who are yelling at one another.
Anonymous  2009/05/23 (Sat) 16:29 No. 87138
[1] Warn them.
Anonymous  2009/05/23 (Sat) 17:55 No. 87147
[x] Warn them
Anonymous  2009/05/25 (Mon) 11:19 No. 87241
[x] <Intelligence> Intercept the Teacher.
-[x] "Neither Kaguya Houraisan and Mokou Fujiwara will be coming in to school today. Apparently, they had another one of their spats on the way to school."
-[x] Since this is a recurring event, tell the teacher that you'd prefer to take them home, and inform their guardians of the matter personally.
-[x] You can only think that discipline through the administration or the authorities would compound the problem, so you wish to avoid making it an official incident.
-[x] You'd ask she mark you on the attendance list with an unexcused absence for now; your respective guardians will phone in an excuse when you get home. You might be able to come back for the the second half of the day, but it depends on how long it will take to discuss with their families.
-[x] Bow and thank the teacher for her patience and understanding in dealing with her students' non-scholastic problems.

This makes you seem responsible, while relieving her of some of the administrative burden or the dreaded parent-teacher interaction.

Because we are the new kid, and a straight-laced, bookwormy one at that. No way in hell would someone who an authority problem stick his neck out for another delinquent he doesn't know on his first day of school. No, we might really be the Concerned & Responsible Youth that teachers everywhere dream of having in their class.

Normality is not what we want. We are different; we're going places. Making bold decisions like this is how we're going to make the impression as such. The bookworm, a prime target for bullying, has now ingratiated himself with two of the school's premier thugs, obviating most of the problems that would be the consequence of our concentration.
Anonymous  2009/05/25 (Mon) 13:12 No. 87254
>>87241

Pro Tip: Our character has no fucking clue who any of those people are yet.
Anonymous  2009/05/25 (Mon) 15:25 No. 87261
>>"Neither Kaguya Houraisan and Mokou Fujiwara will be coming in to school today. Apparently, they had another one of their spats on the way to school."

First of all, we only caught the names "Fujiwara" and "Houraisan". There is no logical reason for us to know their full names.
Secondly, we are addressing a teacher, and all of us are already AT school. Whether or not those two attend is NOT our call to make.

>>Since this is a recurring event, tell the teacher that you'd prefer to take them home, and inform their guardians of the matter personally.
>>You can only think that discipline through the administration or the authorities would compound the problem, so you wish to avoid making it an official incident.

Again, NOT our calls to make, and keeping in mind this is a new student talking to a faculty member, it's more than a tad presumptuous of us to suggest we know better than a teacher on how this situation should be resolved.

>>The bookworm, a prime target for bullying, has now ingratiated himself with two of the school's premier thugs, obviating most of the problems that would be the consequence of our concentration.

Setting aside the high likelihood that at least one of those two would probably take great offense at being branded a thug, let alone one of the school's "premier" ones, I would think that even if either of them were the bullying type (and there's no evidence that either of them are) that looking like the "Concerned & Responsible Youth that teachers everywhere dream of having in their class" would not have quite the effect you seem to think it would have.

A new kid comes in, trying to look like they're a "Concerned and Responsible Youth" might come off as a good thing in the eyes of a teacher, but from the perspective of another student it would look completely different. Namely, as a blatant attempt at sucking up and becoming a Teacher's Pet. Combine that with our Bookworm status, and you think that will somehow make us LESS of a target for bullying? You may as well start packing a snorkel in your bag for all the swirlies you'll be getting in the bathroom.
Anonymous  2009/05/26 (Tue) 00:39 No. 87302
{X] Leave.

I knew meta-narratively speaking, we know these are alright folks. But our character doesn't. Here's how the thought process would--should go: Hey, people who are fighting, and could no doubt beat me (me being a somewhat weak bookworm) up!

I should skedaddle forthwith. I shouldn't warn them of the faculty member's arrival. See, if I do that, those two girls--girls who are very good at beating things up--will take notice of me.

When people who can beat other people up take notice of someone who can be easily beaten up, bad things happen.

High stat dialog options never betrayed me.
Anonymous  2009/05/26 (Tue) 17:07 No. 87383
>>87302
>someone who can be easily beaten up
>Athletics: 50
>Appearance: 50
Just because we're smart doesn't mean we're an awkward helpless scrawny nerd. What's more, they're doing something wrong and we're trying to help them avoid the consequences (rather than, say, running to the teacher to tattle on them like a douchebag teacher's pet). That's the kind of favor they'll appreciate, unless they've completely lost it and don't give a fuck about getting in trouble, in which case they won't give a fuck about us either.