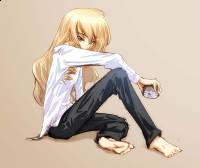 First off, I apologize to anyone who has played and understand the fan game Concealed the Conclcusion, I’ve only read about it on Touhou Wiki and felt very strongly about the story, so much so that I felt that I should be a writefag for once and come up with a one-shot story. I took some liberties with the story so I hope you won’t judge me too harshly.

This is a sort of epilogue to Concealed the Conclusion, for those of you who don’t know check it out here:
http://touhou.wikia.com/wiki/Concealed_the_Conclusion

Was that truly all it was? I sit here in this hospital room with only one familiar face next to me, separated only by a partial parted curtain. She sits up staring at me with those dark eyes of hers, here raven black hair rolling down her face which is soaked with the cold sweat of a bad dream.

A dream we have both just awakened from.

The doctors say that it’s a miracle for us to have woken up from the comas that we had suffered since an accident from several years ago. This place, this is the outside world, or rather the real world. I don’t think I knew the girl next to me from before the accident, but I knew her immediately after I woke up from that dream. The dream about a wonderful and magical land called…

“Gensokyo…” I manage to utter. She smiles for a second, then frowns looking down at her sheets and does a double take looking quizzically at me.

“You… no… it’s silly… D-Did you have a dream about an eastern wonderland called Gensokyo?” she asked weakly, a look of wonder on her face.

“Y-Yeah, with yokai and onis and magic and stuff~ze?”

My face flushes for a second as a smile crosses my face and I reply, “Y-Yeah… a-and you’re Reimu, right ~ze?”

“That’s right.” she smiles, “You’re exactly the same as in the dream.”

She pauses for a moment, seemingly deep in thought. “It’s hard to remember anything that happened before that, but… yes, I think so. But for the two of us to have the same dream is a little…”

“Yes, it was all so very vivid and real. The trees, the mountains…”

“…the people…” I added solemnly. I looked down at my sheets, my hands clutching them tightly. I recalled what Alice had said to me just before Gensokyo disappeared…

“Marisa, I don’t know if you’ve figured it out by now or not, but you’re not of Gensokyo either. This dream world is not Reimu’s alone. You are both sharing this illusion. I… I don’t know for myself what is real or not anymore, but please remember me, and all the rest of us here in Gensokyo. All the times we’ve shared together. All the memories that you have of this place, don’t ever forget them. I‘ll never forgive you if you do! But please, always cherish the time that you’ve spent here with us. And perhaps those memories will become the new Gensokyo…”

A tear ran down my cheek as I recalled those last words. Reimu seemed to notice my crying. She pulled aside her blankets and stumbled over to me with the legs she hasn’t used in years. She fell onto my bed and hugged me and for some reason the tears wouldn’t stop coming out after that and I just started crying. Reimu hugged me tightly, but I could feel her trembling and I noticed that she too was crying.

That night Reimu and I stayed up talking all about Gensokyo, about the incidents that we solved together, about bugging Kourin at his shop, and dealing with all of the youkai. As we shared our stories we laughed at the good times, cried about the sad times, and just enjoyed each others company, each of us glad that we at least one person left that we knew from Gensokyo.

Several days later we were both released from the hospital, the doctors still were unsure of what had caused us to awaken from our comas, but it didn’t bother us too much. Both our families had been with us for the past few days after finding out that we had both recovered from our comas and were leading us out of the hospital. After stepping out of the doors we both stopped, taking a moment to look at each other.

“Yeah, it seems that way.” she said rubbing her arm.

“Of course I will.” she replies as she holds up her cell phone.

We hug each other as we say our goodbyes. While doing so we whispered in each others ears, “Never forget about Gensokyo.” At that we smiled at each other. Of course I would never forget about it, I made a promise to someone very important. After what seemed more like hours than minutes we finally parted ways. Reimu walked off with her family who owned the actual Hakurei Shrine that is actually much less fantastical than the one in Gensokyo. My family was about to begin heading back to our house which was located above a family owned odds and ends shop when I noticed a blond haired girl with a red headband brushing the hair of a dollfie. I immediately ran up to her with an immovable smile on my face. I quickly greeted her and she replied.