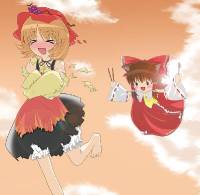 Minoriko. Sweet little Minoriko, bound to a tree and helpless at your feet. You had worried that mere rope might not contain this exquisite creature, this goddess, yet the way the rope bit into her ripe young flesh was simply intoxicating. Yes the Aki sisters were a rare gem in this Gensokyo, Minoriko in particular as only she possessed that certain something that drove you this far.

"Now, now little one. There's no call for that, is there?" Cooing to her you draw a little closer, in response she flinches away as best she can. "Are you warm enough? I can make the fire bigger if you'd like?"
"Just untie me you freak! I wanna go hoooome!"
"Please don't cry again my dear, I don't want you to be scared."
While the tears and screams were endearing at first, her cute little voice raised in sob and moan was rather charming, it did begin to grate on your nerves after a while.
"Why don't you just drop dead?"
"Tut."

Well, if she's going to behave like a little ruffian you'll simply ignore her for now. Turning your back on her for now you begin to tend to the fire feeding it from the little pile near by, you're starting to wonder if you should've gathered more earlier as it's rapidly growing darker and you don't want to be out in the forest so far from civilization when night comes. But your purpose for the delightful little Minoriko should be soon resolved, it's taken longer than you thought to get this far but soon all your efforts will be worth it.

Capturing her was the hardest part of course; first you had to lure her away from her sister and get her alone, it wouldn't be easy to just up and nab a girl who could fly and was more than capable of defending herself against a mere mortal like yourself and with her sister around the feat would be neigh on impossible. You had vaguely been considering taking both of them but the chances of being caught were far too high, much simpler to take her alone to some secluded part of the forest and pin her down. It was by a sheer stroke of luck that the day you chose to act you caught her napping, literally, she and her sister were resting quietly in the Moriya shrine with no one around. You almost couldn't believe it, throwing caution to the wind you acted with reckless abandon. Snapping her up you fled into the relative safety of the trees before she even began to stir, it was hours before your heart would stop racing, by the time she was fully awake she was already bound to the tree and miles from anyone who might interrupt your enjoyment of her.

"Hey....mister? Wh-what are you going to do to me?"
That makes you pause, this is the first time she's spoken to you like this tonight, carefully you turn to look at her. Not making any sudden movements that might frighten her you draw near again and regard her closely.
"Are you scared?"
A simple trembling whisper is all she gives you.
"Yes."
"I told you I wouldn't hurt you, didn't I?"
She doesn't speak, perhaps to scared to, but simply nods. For a moment you find it absurdly funny that she's so terrified of you right now, considering that even though she's so small and frail she probably could kill you with minimal effort. But Minoriko would never do that, she's far too precious.
"Yes. It won't hurt, you might think what I'm going to do is very.....strange. But you may even like it."

The time is right, the small child is ripe with promise and potential, all of which you intend to take from her now. You can see the firelight reflected in her bright, terrified eyes, the subtle tremble of her body wavers with the flickering light and in the looming darkness it's almost as if nothing in this world exists save her. You couldn't stop now if you wanted to.

Her hushed cry, is it a plea to be left alone? Or does she wish this as well? You know her body, already you can tell it cries out for release, release your all too willing to give her. Winding your way over to her like a snake after it's prey you capture her in your gaze, she stares at you stunned unable to pull herself away even as you run your hand along her body. Slipping your fingers down her belly, noting the softness as you do, past her waist until finally they reach the hem of her skirt.

Despite her fervent tears and begging you know that she wants this, the way her legs quiver with the anticipation tell you so. As gently as you can you lift her skirt and tuck it into the rope where it stays, exposing her lily white skin below and the delicate cotton panties. With great tenderness and reverence you slowly pull the undergarments down to her ankles, careful not to touch that most sacred place, she begins to writhe against the ropes tossing her head from side to side with anxiety.

"M-misteeeer! Please! I need to-!"
"I know Minoriko. I know."
You stroke her hair so as to comfort her, with her eyes screwed up tight and biting her lip she tries to resist what she feels welling up inside. She's clearly too distraught to help herself, so you'll have to make the first move for her. Gently you apply pressure to her abdomen just above the waist and the affect is immediate to your delight.

With a rapturous cry she tosses her head back and gives into you, a stream of pure gold flows freely from her most private of places and glimmers in the glow of the camp fire, not wanting to waste a single drop on the unworthy earth you bow your head under that stream and open wide to receive her communion. On and on it flows freely into your eagerly waiting maw, you made sure that she was well watered before this moment and your work has paid off, now you drink freely from the wine of the gods.

The colour is unparalleled even in this inferior light, such a wondrous shade of yellow as if it were distilled sunlight itself! A fragrant and lovely nose reminiscent of the sweet autumn fruits that sends your mind reeling! And topped off with an elegant, earthy, almost silk-like young palate that makes you lap up more and more of this wondrous stuff!

Her moans of shame and disgust belay her innocence, were she any true connoisseur of wine she would have the sense to bottle her essence and bring it to the mases! As things stand however, you are privilege to think yourself one of the very few who have ever sampled this rarest of breeds. Now you know what it is to taste of perfection! Yet even as you think yourself in heaven the supply dwindles to a trickle, then stops completely, licking a few errant drops from your lips you keep your eyes closed as to protect the modesty of the young lady and remove yourself from under her. Mopping your face with a handy handkerchief you always carry you give a satisfied belch and turn to thank your benefactor.

"What the heck is wrong with you?" Her panicked babbling is of no consequence as you set about resorting her appearance, redressing her and generally tidying up. "I knew you were a pervert! You drink piss!"
"That's hardly any kind of language a young lady should use."
You chide her gently, even as you begin to unbind her, as you do she goes silent clearly confused by your sudden lack of interest in her. Ah! The misunderstandings of the youth. With the girl seen to you set about stifling the camp fire and collecting your scant possessions, you can feel her stare on your back as you do and yet she doesn't move to harm you or run away.

So, with great boldness you turn to her and say.

>"Next time, I would appreciate red."

Goddammit Scorn. I let my guard down till now and you pull this on me.

Narutaru. I noticed in that episode that it's full of perfect reaction image moments.

Took me a while to put the underlying 'God of Harvest' bit and wine connoisseur babble together.