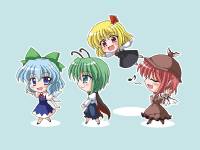 A peal of thunder rouses you from your slumber. Glancing at the clock, it’s several hours before you’d normally be up. Outside there seems to be a horrendous thunderstorm rolling through. Thunder, lightning, rain, wind, the works. You contemplate just going back to sleep, but while you’re thinking another loud crack of thunder shakes such notions from your head.

You look out your window and see that it’s coming down so hard that it’s impossible to even see over to Mokou’s window. Man, where the hell did this storm come from? For as hard as it’s raging you had no idea that it was even coming.

Swinging your legs off the side of the bed, you sit up. Your head swims slightly from your sudden motion and grogginess from having just woken up. Ugh. What a way to start the day. Unsteadily you lurch to your feet and stumble across the room. A quick shake of your head fails to clear the fog as you stumble over to your desk. Using it as a balance you look down at it, breathing slightly hard. You really shouldn’t be this groggy, but for some reason you can’t really seem to focus. Staring at the surface of your desk, however, suddenly snaps you to attention. Your cell phone isn’t there. It’s not on the floor around the desk either, as rapid search reveals. About this time you also note that your bedroom door isn’t shut tight. Someone must have come in during the night and taken your phone? But why would someone do something like that? There’s no real reason to ta. . . Marisa. But why would she take it? Damn. It’s too early in the morning for all of this. You can’t really think straight. Or walk straight for that matter. You attempt to cross the floor to your door, but fail miserably. As you fall to the floor the world around you seems to grow distant. . .

It’s morning. Sunlight streams through your window. Today’s your first day of school! Your mother comes into the room and sees that you’re already awake.

“Oh? So you’re awake already! What a big boy you are!” The woman smiles at you. For some reason, her face seems hazy, you can’t quite make out the features. However, you nod to this woman.

“Well then, does my big boy want to get dressed himself today?” The woman’s outline gets more and more hazy the longer this goes on. It’s scaring you deep inside, but outwardly you don’t seem to be phased by this in the slightest.

From somewhere far away you hear the faint sound of someone calling you. Unable to make out their voice you simply get out of bed and get dressed in the uniform that this fading woman is handing to you. You want to scream, you want to stop this, you want to know what’s going on, but you can’t control your actions it seems.

The woman who was handing you clothing seems to have completely disappeared. You toddle out into the hall, only to find it to be a vast expanse of doors, leading off in two separate directions. Behind you the door slams shut. You look around, growing more and more terrified by the moment. This place isn’t right, this isn’t somewhere you should be. Glancing back and forth between the two hallways that you find yourself in the junction of, a voice behind you starts to speak.

“You shouldn’t be here!” the voice admonishes.

Turning quickly, you see a blonde woman, dressed in a bizarre outfit.

“It’s time for you to go away.” The woman waves her broom at you and you find yourself falling. You feel like you hit the ground with a resounding thud. Instinctively you sit bolt upright.

And now you’re looking at four very worried faces. Mystia, Cirno, Wriggle, and Rumia all are looking at you with great concern. Your body feels heavy, much like you’d just run a marathon, you seem to have been sweating profusely as well. Your head wavers, and you feel yourself swooning again, but Mystia keeps you from falling.

Your head is swimming, but with your sisters here you feel slightly better for some reason. After few worried moments of assuring your sisters that you’re alright, your head starts to clear, and your body seems to come back under your control. You have no idea what the hell just happened, but you see no reason to worry your sisters about it. Reassuring them a final time, you manage to stand up. You’re a bit wobbly, but other than that, you feel much better now.

After several placations later, your sisters finally retreat to their rooms. The storm outside is still raging. Glancing over at the clock it seems that this whole event has transpired in less than half an hour. Bizarre. . . It seemed like so much longer than that. Trying to think back on what happened only serves to make you feel woozy again, and results in nothing but a fuzzy memory of a hallway or something. Maybe you were getting dressed. You have to stop this before you fall down again. You don’t want to go through that whole mess again. Glancing at your desk, you see that your cell phone is missing. Wait, Didn’t you notice that already? And again the wooziness returns. Thinking back to this morning seems to trigger it. Not good. But still, you wonder absently, who would have taken your phone.

We are going to get to the bottom of this mystery, and someone is going to pay. Time to take despair and GRIMDARK into our own hands.
Anonymous  2008/08/05 (Tue) 21:42 No. 54345
I wish I knew what exactly had gone on before this point, but the archives are broken and I can't check it out.

I can't believe GA:SD and YWUiG are both restarting when I'm going to be away from a computer for a week and a half...

I believe we heard a similar voice from the walls of the house when we revealed ourself to Marisa.

>Your mother comes into the room and sees that you’re already awake.
>For some reason, her face seems hazy, you can’t quite make out the features.
>The woman’s outline gets more and more hazy the longer this goes on. It’s scaring you deep inside, but outwardly you don’t seem to be phased by this in the slightest.
>The woman who was handing you clothing seems to have completely disappeared.

Apparently, Marisa felt her attempt wasn't enough and is trying to write Mima out of our memories completely. Likely she started doing so the moment she left the room.

We were able to escape into the halls of our memory (likely because of our magical ability), but Marisa caught us and threw us out.

This is the same night, I think. Which means she's too busy erasing our memories.
Anonymous  2008/08/06 (Wed) 00:19 No. 54366
>>54364
Erasing what? What very little information we managed to pick up in the five days since we wound up with amnesia?
What purpose would that even serve? Everything we know about Mima at this point is entirely due to what others have told us. Unless Marisa has a plan for either mind-wiping or otherwise silencing anyone who could possibly tell us anything, I don't think erasing our memory alone is going to accomplish much.
Anonymous  2008/08/06 (Wed) 00:44 No. 54368
>>54366

Reread our dream sequences in the archives. Firstly, the memories are still there, we just can't normally access them. Secondly, emotional memory was not blocked completely as evidenced by our immediate hostility to Marisa. She probably thinks she just didn't do a thorough enough job the first time.
Anonymous  2008/08/06 (Wed) 01:10 No. 54370
>>54368
Assuming, of course, there even was a "first time". We have no clue what happened the night we lost our memory, and as far as I can tell we haven't made much progress in figuring it out. There's also that note, which may or may not be related, and all we know about it is that whoever wrote it has the same habit of doodling a particular character on it that Mokou does, but with much worse handwriting.

Even if Marisa IS screwing with our mind somehow, the question is why? Or, more specifically, why US? Mystia has the same dream we do, as well as similar feelings towards Marisa as we do/did, and yet we're the only one to experience a sudden and drastic case of amnesia? If it was due to something we had found out in researching Mima's disappearance, then why would one of the few people we trusted enough to confide in about our research not only fail to find something suspicious about our memory loss, but actually suggest we talk to the person who would have been the most likely suspect for causing our memory loss in the first place?
Anonymous  2008/08/06 (Wed) 01:19 No. 54371
Thread archives:
http://anontouhouvnproject.makeforum.org/post343.html#343
http://www.sentrygun.com/touhou/threads/GA_01-13.zip

You had me going until

>Even if Marisa IS screwing with our mind somehow

>>Those phone messages will still be there tomorrow, hopefully they’re nothing important.
Uh-oh...

>>Glancing at your desk, you see that your cell phone is missing.
Oh BALLS.

This is my best hangover day ever!
Anonymous  2008/08/06 (Wed) 05:10 No. 54419
Fuck yes, GA:SD is back!
Anonymous  2008/08/06 (Wed) 05:39 No. 54427
>>54370
>If it was due to something we had found out in researching Mima's disappearance, then why would one of the few people we trusted enough to confide in about our research not only fail to find something suspicious about our memory loss, but actually suggest we talk to the person who would have been the most likely suspect for causing our memory loss in the first place?

Because she has poor judgment? Or maybe she's less of a friend than she first appeared to be?

Either way, we need to get back to the flower shop as soon as we can. At this point I'd trust our mother's rival over our new mother. We need information, and information from former enemies has its place as well.

>>54358
>I believe we heard a similar voice from the walls of the house when we revealed ourself to Marisa.

You mean when told her about the amnesia? Because looking back at the archive, I don't see anything about a voice. There was this:
>>“I will say this. You shouldn’t go see Yuka again. That woman is dangerous. For all we know, she may be what happened to your mother.” Marisa’s eyes are slits, glaring off at some unknown thing in the corner of your room.

But, frankly, glaring off at some point in space could mean just about anything.
Anonymous  2008/08/06 (Wed) 14:22 No. 54610
I hope someone remembers that we're only a few short days away from some kind of crisis event, and we have only one or two flags to trip that can avert it somehow.