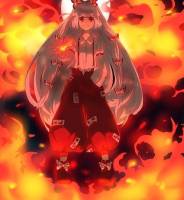 Inhaling deeply with a start Mouku returns to consciousness, only to be met with agonizing pain that leaves her writhing and gasping in the pool of her own blood. Watch, as the immortal whom has suffered a thousand deaths is forced once more into life, see the desperate pain in her eyes threatening to drive her mad as she is denied the embrace and comfort of oblivion. Observe how she chokes while her own blood fills her lungs threatening to drown her even as she coughs it out weakly, forming a bloody froth around her lips. Now watch as she reaches shakily despite her anguish, stumbling once face first into her own vitae, for the bloody kitchen knife. The weapon used to render her thus, see how she slices into her chest ripping flesh until it goes deep into the lung to let that accumulated blood drain so it runs like a crimson river down her.
Her brutal methods would kill a lesser being, but we can assume this immortal may well have done this macabre version of first aid many times before. Yet even so, one must marvel at the mind able to keep itself in the face of this torment.

Her task done she collapses once again into that shallow pool, with a sickly splash her strength fails her for now leaving her wheezing and sobbing. With the immediate threat of a second death staved off she allows her cursed vessel to restore itself, perhaps she sinks into some blank state of mind to weather this.

Perhaps this is just wishful thinking.

To her the time spent laying immobile surrounded by her own gore must seem like a life time, even to one as endless as her, but as outside observers we will notice but the passing of at the most ten to fifteen minutes. Eventually the bloodied girl rolls over onto her back, the stab wounds on her body smaller now but by no means closed, where she continues to wheeze as she fight to hold onto what we call for lack of a better term her "life".

But she will not stay as such for long, the pain lessens only slightly but it is enough for with her iron will to begin thought again. She begins to recall the events that lead up to this moment; how her anger was riled up by that man, how she could stand no more and rose against him, how he struck her down.

How she killed him in return.

She panics, see how the process of her thinking has lead her to believe that she has murdered her murderer. But she considers her crime greater than his, the loss of a life means nothing to her as she has recklessly thrown it away in the past and she has also taken the life of one just like her. Yet to kill one without that advantage, would be unforgivable. The perceptive of us will see how the tears run down her pale and lovely face as she is now racked with guilt over her brash actions, the torment her senses gave her are nothing compared to this hell. Those precious drops that fall from her eyes are like prayers for that man's soul, he would cherish them if he knew.

Yet even through the fog of pain and the tears of guilt the immortal girl Mouku is observant, see how she suddenly stops her deluge and assumes a very intent expression? If we listen closely with her we can hear the faint panting of a man some where in the house.

Hope, that is what shines through the moisture in her eye, that is what drives her to drag her dessicated body through the house towards the source of that sound. Trailing blood behind her as she crawls on her belly, like an obscene slug, she grits her teeth to ignore her pain in order to find that voice.

Once again the illusions of pain will make her believe she struggled on for an eternity, but we the casual observer know better than that. Within but a few scant minutes hardly worth measuring she stumbles onto the location of her target.

There, stomach charred like the remains of a log from a long spent fire, is the man who wounded her.
The man she tried to kill.
He has collapsed into a heap by the bath his eyes wide with shock, unable to recognize his surroundings. Look at his hands, notice how they are blackened as if covered in soot? In an attempt to preserve his life the fool grasped at whatever ointment he could find and rubbed it into the burn, by the look of his condition he acted hastily and will not have long to live.

The words are forceful but weak, the air intended for speech leaks out of the punctured lung bubbling the blood seeping out of her. Scrabbling desperately on the slippery tiles she pull herself over to the recumbent figure, the screeching sound alerts her to the fact that she still clutches onto the knife as it scrapes against the floor. Disgusted she throws it from her, albeit feebly sending it only a few inches away.

The man barely stirs at her presence, he is too far gone to see the world around him as his breathing becomes shallow and slow. With great difficulty Mouku manages to be by his side and caress that dying face weakly.

But we all know her quiet frantic begging will not revive the passing man, soon he shall be rewarded the eternal sleep that she is denied.

"You can't die! If you die I'll go all the way to hell and drag you back! It'll be worse for you, so just don't die like this! Please!"

Her shaky hands grab pathetically at his clothes trying to shake him, but she has not the strength to move him nor he the life left to respond. The flickering spark of his soul is like a candle in the wind as we watch it dim in his eye.

Afraid but left no other choice, Mouku is forced to make a decision of the utmost magnitude. In order to save his life, to "take it back" she must offer him the one thing she has that will save him. It is a simple task, not much worse than draining one's lungs of blood with a kitchen knife.

It is amusing to see how thankful she looks when she finds the knife not far from her when she looks for it, is it not humorous that what was used to take a life will now return it?

The silvery blade flashes cruelly in the air as it is brought swiftly into her stomach, she cries out in pain but does not so much as loosen her grip on it, there she dissects the flesh over her stomach into a Y shape.

For a moment it is all too much and she succumbs to the pain with her mind shutting down, but she fights to continue and soon she is folding back those flaps of flesh with a wet sound. Exposed now we can see the mess of organs pulsating grossly now revealed to the air; the writhing tubular mess of the intestines, the bulbous lump of the stomach and of course.

The thick, purplish pink shape of the liver.

Horrified to see her inner most workings displayed like this she voids her stomach of all it contains, giving us an excellent view of how the stomach is squeezed by the neighboring muscles as she does, for a while she will wretch and spit blood but will will gloss over such trivial details.

When recovered she casts a quick glance at the man, she will have no time left to work with should she hesitate further. So, with a resolve surely born from insanity she lifts up that squishy living mass of flesh and slices it apart. Pain is not a strong enough word to describe what she feels as she does, the mere fact she does not pass out is a miracle born from her madness.

Eventually she finishes her self butchery and holds in her hand three quivering lumps of her liver, each containing a dose of the life preserving Hourai elixir. When she turns back to the near corpse behind her, the organs of her body spill out from her. Yet even as her feet become entangled in her own entrails she can no longer care for her self, right now that man consumes her every thought.

By his side again after squirming around hindered by her spilled vitals she holds up the lumps of flesh to his face and begins to speak in a frighteningly calm and affectionate voice.

"It's okay, I can take it back! Just eat this, I cut it up for you so you can swallow it easier. Once it's inside you can't die, I should know. So just eat up okay? Don't mind me, it was my fault this happened to you, so I'm only paying you back right?"

Slipping the meat into his mouth she uses her other hand to stimulate his throat into accepting it, when it disappears she cradles his head in her lap being careful to keep him away from her ripped open body.

"Good, I'm happy you ate it. You'll be like me now. I can't say it's always good, but you get used to it. And I'll be there for you, so you won't have to be afraid of yourself. I think I like the idea of having another one like me around, a friend. Maybe you can help me kill Kaguya some time? Yeah, me and you kid?"

None of it's fallen off the board yet

But I love Mokou and it had a happy end.

I like the twist that it was Mokou who decided to have her liver eaten by Anon, rather than Anon himself.

The narrative, however, isn't to my liking. Situations like this demand a more personal point of view, in order to draw the reader in and involve them. What this comes off as, is a sort of narrator who displays a slide show while going "wink wink, nudge nudge" at the audience. It's a disconnecting mode of writing that shouldn't be used outside of absurd parody (a la Douglas Adams, God rest his soul).