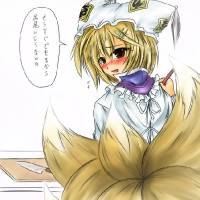 Well, I'm having my own little TAIL FEEL GOOD moment here, because I- I

I like fluffy tails and I can not lie
You other anons can't deny
That when a girl walks in with an fluffy puffy tail
And brushes it on your face
You get sprung
Wanna pull up tough
Cuz you notice that tail was stuffed
Deep in the dress she's wearing
I'm hooked and I can't stop staring
Oh, baby I wanna get with ya
And take your picture
My homeboys tried to warn me
But that 10% you got
Make Me so horney
Ooh, tail of fluffy fur
You say you wanna get in my benz
Well use me use me cuz you aint that average groupy

I've seen them wagging'
To hell with romancing'
She's Sweet, Wet, got it going like a turbo vette

I wanna get you home
And UH, double up UH UH
I aint talkin bout danmaku
Cuz bullets n’ shit were made for toys
I want em real soft and fluffy
So find that fluffy double
Mixalot's in trouble
Beggin for a piece of that fluffle
So I'm lookin' at rock videos
Knockin these bimbos walkin like hoes
You can have them bimbos
I'll keep my women like Rantails
A word to the runner up touhous
I wanna get with ya
I won't cus or hit ya
But I gotta be straight when I say I wanna --
Til the break of dawn
Baby Got it goin on
Alot of pimps won't like this song
Cuz them punks lie to hit it and quit it
But I'd rather stay and play
Cuz I'm long and I'm strong
And I'm down to get the friction on

I'm a shooting star leaping through the gaps
Like a touhoe defying the laws of gravity
I'm a racing car passing by like Marisa
I'm gonna go go go there's no stopping me
I'm burning through the sky yea
Two hundred degrees that's why they call me Captain Anon
I'm travelling at the speed of light
I wanna make a touhoufag out of you
Anonymous  2008/04/24 (Thu) 13:03 No. 24319
>>24308
Someone has to write Kyon/Ran fanfiction now.
Just because it is ridiculous and would make no sense whatsoever and why, why would you do that? Why would you do that?

Anyway, can I steal your image?