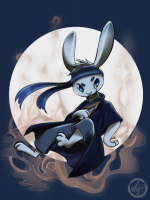 A friendly land where the days are bright, the nights are beautiful, and sounds of fear and joy resound around as we all live as if safety was not a lie.

There is a strange scarlet mist today, blocking and choking out the sun. No need to worry though, as the sun is a deadly laser and this mist is helping shield us from it today. Today’s activities can all be done without sunscreen and I’m sure the local vampires appreciate it very much.

If you’re a filthy sun lover though, Hakurei Reimu, you know, the Miko? Is currently en route to investigate the disturbance which seems to be located around a mysterious mansion.

More as the story develops…

A yokai of darkness that calls herself a “Human Eating Yokai”, she seems to have lost her appetite for human flesh along with most of her height and maturity. Long gone is the appearance of the blonde yankee and this yokai now spends her days wandering along the edges of the Misty Lake in a bubble of darkness.

Every so often, when the moon is brightest and the air is soft with regretful melancholy, she visits a grave with a broken kitsune mask and sits. Always quiet, she always seems confused as to why tears slip down her cheeks. As if mourning a friend forgotten and life half remembered.

This is the worst time to speak with her. Do not do this, but if you do, know that we will laugh very hard at you..

We suggest carrying raw meat to throw when you run away from her. While you may not be able to see in her darkness, neither can she.

If you want to meet her, we suggest during the day with an offering of raw meat. She prefers human meat, but says that pork or beef is fine though. In exchange,

My strongest fairy intern, Cirno attempted to stop and interview Reimu, you know, the miko? On her investigation of the Scarlet Mist. Unfortunately, during the customary Danmaku, Cirno sadly got a literal brain freeze and is now an ice sculpture. Daiyousei has picked her up and is bringing her back to defrost.

Daiyousei, my most sensible fairy, informs me that there is a mansion on an island in the middle of the Misty Lake. It appears that this Scarlet Mist is the newcomer’s way of saying hello to us. Hello to you, Mysterious Mansion in Misty Lake, we welcome you and your Scarlet Mist shielding us from th Sun’s deadly laser.

Hold up, I am being called. Let me just pick this up.
...Hmmm… Yes… Indeed… How? ...Thank you for calling and not killing me.
That was Yuuka Kazami, Flower Master of the Four Seasons, calling to inform me that flowers need sunlight and that if her flowers die, I and whoever killed her flowers will too. She did not expand on how. I would like to formally request the owner of the Mysterious Mansion in Misty Lake to stop exuding the Scarlet Mist as I like being alive.

Failing that, I pray that Reimu, you know, the miko? Quickly resolves this incident. She has already slipped past the sleeping sentry, a red-haired Chinese Girl and is currently in a library, fighting a librarian and her succubus.

I know booklovers hate the stereotype of being lust filled, but they should really stop summoning demons of lust as their secretaries if they wish to break away from it.

Speaking of flowers, it is almost time for the Sakura festival. A tiem for family and friends, one should always remember to pack extra sake and food in case of unexpected guests. Inhospitality kills, you know you know!

As always, there will be no reservations and it will be first come, first serve. Prepare your best Danmaku and please keep all injuries to just under the maximum of lethality.

Marisa Kirisame, who owes Kosuzu Motoori several antique books, fifty thousand yen, and a box of dango, has arrived at the mansion and is now bullying the poor Chinese Girl. She isn’t much of a guard though, having slept through the first one. Perhaps she’s had a long day?

Marisa is now stealing books from the poor librarian who is wheezing on the floor, her lusty demoness torn between aiding her master and stopping the thief. Marisa has stopped though. She is walking to. Perhaps she’ll aid them?

No! She simply reaches around to grab several other books.

Marisa Kirisame truly has no shame.

Tick tock stops the clock
The maid’s knives fly through the air
Schlick schlack, did you dodge?

That has been poetry time. A Haiku is a syllabic style that goes five, seven, five, though there are variations where you can go freeform with the syllables but stay within the restraint of three lines.

Lost and Found: Somebody has lost track of things. They knew where they began and have a vague idea of the end, but they have lost where they were in between. Take a moment, someone. Retrace your steps. Find it if you can. If you cannot, this is your end then. I hope you find where you were, someone. I hope you find it.

It appears that things are coming to a climax at the mansion. Marisa Kirisame, who owes Alice Margatroid a tin of biscuits, several gems of varying sizes, and a doujin, has joined Reimu Hakurei, you know, the miko? And the two of them are now confronting the master of the mansion.

She appears to be a Western Vampire and has invited them to discuss things over a spot of tea. Her motivation appears to be that the sun is a deadly laser and she would like to walk about without worrying about dying from it.

What a wise young… old? ...What a wise vampiress. I too would like to walk about the sun without having to worry about dying from th sun’s deadly lasers, though it probably would take a considerably longer time for me to die from the sun than a western vampire. Probably.

Alas, flowers need the sun to die and as our survival depends on a flower’s ability to photosynthesize, I shall pray for our two heroines to win.

And now… the fortune.

Speaking of, friendly reminder, do not TOUCH the flowers.

If you enjoy having the sun shining a deadly laser down daily, please consider donating to the Hakurei Shrine. Hakurei Shrine, protecting the Sun from a Deadly Laser.

It turns out the culprit behind the scarlet mist was in fact a western vampire named Remilia Scarlet.. I’ll admit that I was speaking of vampires in jest, but evidently, Gensokyo has a strange sense of humor and has, for lack of a better term, kidnapped a vampire and her coterie.

Gensokyo is a land where fantasy and reality meet, the boundaries blur, and something strange happens every day and every night. Logic has its place here, but it is a twisty one that bends and loops. It never breaks though. It cannot break.

A young realm we are, but we all live together and have a history together.

For all the laws are broken and rules undone, there is a logic to this place, forged by ethos and hardened by pathos. The rules were laid down to prevent ancient tragedies from refolding and we are all players in this realm, no matter how small or large we are.

If one is brave enough and one is clever enough and one is kind enough, one can do anything anywhere anytime. Heed the unspoken treaty between mortal and immortal, human and inhuman, permanent and impermanent, and all will be well.

Come now, dreamer. It is time to go now.

Till next we dream.