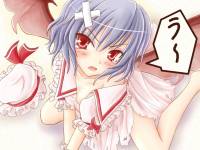 You nod at Marisa. "This is going to be great," her smile seems to say.

With a swift kick, the door is forced open. A flurry of light follows.

Marisa goes in shooting, unleashing the brightest display of bullets you've ever been a witness to. All the colors of the rainbow are there, shaped into stars and fast-moving rays. It makes you want to stand and stare in awe. But you're following Marisa lead! And she bursts in to the room aggressively, laughing and shouting something about justice and being around to liberate ill-gotten gains. You can't really shoot as many nifty-looking bullets as she can but you can at least follow.

Things inside are hazy. You're sure it's a really nice room. With the fancy red wallpaper with the pattern which is, no doubt, a product of elegant taste. The bullets have scuffed and dented the far end of the room and have basically guaranteed that it'll need an overhaul. You stand next to Marisa, trying to make sense of everything else: a few wooden tables and large, padded chairs are overturned. The sound of whizzing bullets are pretty much all you can hear but you're sure that there's a few confused cries that are coming from somewhere nearby.

A rush of excitement coursing through your veins, you do as she asks. Your movements are fast and your body feels light. You vault over an overturned table, by a big shelf stuffed with curios. It's the kind of stuff that would catch your eye under any under circumstance. There's a young girl on the other side of the table. She's holding a silver tray above her head, her slender arms trembling. Wearing black and white clothes and an inappropriately short skirt, it's clear that she's just part of the help. She doesn't even so much look at you. Her lips tremble and tears well up in her eyes. You leave the fairy behind, deciding that complementing her on her nice wings would be a little too inappropriate given the circumstances.

You avoid tripping on the shattered tea cups and slipping on a puddle of tea as you make it to the next piece of furniture.

Out of the corner of your eye you see that a few of the paintings have been damaged by Marisa's assault. She's really not pulling any punches. And she doesn't seem like she's going to let up anytime soon. Working her way deeper into the room, she sprays more bullets against the finely-upholstered furniture and rips it all up. Even though you're not the target, you feel that you could be hit at any time by a stray bullet.

The next piece of furniture you make it to is a sofa. It's not very long and is the weird recline-y type, where someone sits and leans on their side. It's something you'd only seen in a picture book before. It's there where you find what you're looking for, however.

A small girl is taking cover. Her clothes are torn in places and she's trying to keep her head down as far as possible. She's not wearing a maid uniform. Despite their state, it's clear that the fabric she's wearing is expensive - and the light color they're dyed in is rare. The ribbons and lace couldn't have been cheap either. Mending it would take a while? but you think you could do it if you had more of that material.

She's definitely the most important person in the room. The way her nose twitches anxiously is different to the complete panic in the poor fairy's face. Also, she seems to react more to Marisa's wanton destruction of nearby sculptures and paintings more than constant hits scored on the sofa. Lastly, don't know what a vampire is suppose to look like but you suspect that the bat-like wings coming from her back are a good bet that she's one.

She notices you almost immediately. Her eyes are wild and there's clear confusion in her face. "Sakuya, get Sakuya!" she blurts out, confusing you for someone who works for her. Probably. Whatever noble bearing her voice might normally have is entirely replaced by high-pitched panic, 'It's all getting ruined!."

"The stone, I want the stone," you tell her directly, feeling that it's what Marisa would have wanted you to say.

"Eh, what?" she grips at her pocket. No doubt that she's keeping the stone in there. "Call Sakuya," she repeats, "I don't want to ruin the room by fighting myself. Go on! What do I pay you for!??

"You don't pay me," you tell her," scooting over closer. There's a streak of further confusion as she tucks her wings closer to her body, as if to protect herself. The stone is in her hand. She's holding on to it like it's a good luck charm.

"I- stop wasting time!" impatience marks her words. She snaps at you, ordering around like she's allowed to. Guess you can't really ask her where she buys her lace and trimmings from.