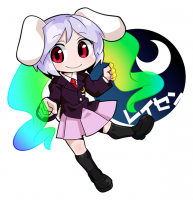 There were birds that had once perched upon an ancient tree, those that you would see day in and day out, thinking that perhaps they won't really birds, but statues, and some jerk was trying to trick you. They had taken up those wings of theirs and flew. Flew as fast as they could. Why? What could possibly cause them to panic, to leave the tree they spent so long at? It's a mystery you have no concrete answer to.

You sure hope that it has nothing to do with the bullets you're putting into it. After putting an entire magazine into the same spot, you lift up yourself and your custom Lunarian gun. It was one of the things you left with you when you came to Gensokyo the first time, but this time around you made sure to have it.. Pulling it around so it comfortably rests upon your back, you stand and stretch. It'd been a long time since you'd shot anything. Working for the Sisters was hard work. They weren't exactly lenient on the manual labor, not to mention other tasks they set you out to do. The only reason you were even here at this make-shift range was because of your friend. Speaking of...

"What'ya think? Ready to give up yet?" You smirk, the cocky kind of smirk that you're sure if you saw on someone else, you'd deck them clear in the face. It's a justified smirk though. You're almost positive that she's rusty, meaning that even a shot like that would be hard to hit.

"You can't be serious. I could do that in my sleep." She has that look in her eyes that tell me she's serious, yet there's something else...

"What? No way. I don't believe you. How about I knock you out, then you start shooting."

"I didn't mean that literally."

"Besides that, I have to get back to Eientei. Eirin has something for you to do, so go to her when you get back, alright?"

The companion of yours is one Reisen Udongein Inaba. A Lunar Rabbit like yourself, she left the moon long ago with the Lunar Princess and Eirin. You're pretty sure she's still feeling a little guilty over that, but anytime you try to bring it up, she shrugs you off, or dodges the question somehow. You're sure one day you'll get through to her.

You yourself are also named Reisen. You were "hired" by the Watatsuki sisters, and your previous name was thrown right out. You miss your name. It wasn't as bad as you thought it would be however, but people acting as if you never existed before the name "Reisen" wasn't the greatest feeling in the world. You knew this people, after all.

Currently, you are taking a vacation in Gensokyo. You'd always rather liked Gensokyo. It was a tranquil place, and the overflowing green was a nice contrast to the starker lands of the Moon. At the moment you were taking an unpaid vacation. Even though you weren't paid anything.

You definitely weren't kicked out. They rely on you too much. At least, that's what you tell yourself. Not that you need to.

You realize that, in your time explaining all these things to yourself for no good reason, Reisen already started on the return trip to Eientei. She did mention that Eirin had something for you to do, but you're almost entirely sure that it can wait. While you're out, you should go do some things that you haven't been able to since you got here.

[] You never did spend much time in the village. It's good to meet new people, right?

[] A trip down memory lane shouldn't be too bad. Why not visit that shrine maiden?

Well, after a bunch of well maybe I should, maybe I shouldn't, I've decided to give it a shot and try to make a CYOA of my own. I apologize in advance for being such a shitty writer, and lack of length, however, I'll try to update frequently in one day. I know it's god awful, the writing is just terrible, but I think that there's no way for me to get better without doing something. Thanks for your patience.
Voting will be first to 5, or within an hour. Otherwise it'd take too long.
Now to find something to hide under.
I'm so sorry for everything please don't kill me I'm sorrrrryyyyy.
Anonymous  2014/08/09 (Sat) 00:12 No. 181314
You did read the stickies over on /gensokyo/, right?
Anonymous  2014/08/09 (Sat) 00:42 No. 181317
>>181314
I did.
I want to improve as a writer, but I don't think I'll be able to if I don't at least try something. Yes, I know it's pretty much shit, but I feel like writing more frequently will allow me to improve. If nobody wants to read such an awful story, then I can understand. However, if they'd like to help me improve and grow, then I'd be all the more happy to continue, and one day, git gud. If you are referring to the way I should be acting, I see no such thing that would be considering erroneous. Thanks for your time though. I apologize for you having to suffer through this.
Anonymous  2014/08/09 (Sat) 00:52 No. 181320
If it's any consolation, I think you're off to a decent start, OP. As such, have a vote!

the story doesn't seem bad from the 1rst post so I'd say you're on the right track, just keep writing and you'll improve and don't depreciate yourself so much otherwise it's going to be and stay true.
SettingsAppearance [X]