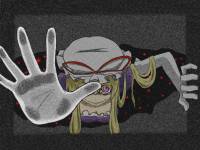 You briefly reflect upon the path that led you here. The lust for power to match the legends which had founded the prison demiplane in which you resided. The careful study and planning that had led you to this point, and the carefully prepared contract which gave you the power to step beyond the limitations placed upon the inhabitants of the prison which was your home.

Your plan had been considered and reconsidered a hundred times for every step. The deal with the devils to gain arcane power of the tenth circle. The development and verification of a ritual to sacrifice that arcane power and the soul which you had sold for it. There were no loopholes, no flaws, and no regrets.

The first day of the eleventh year was tomorrow; tonight at midnight the ten years of your power would end. Survival after that point seemed unlikely, but you didn't care. It was time for your ritual; the culmination of all of your planning. You would finally transcend your mortal frame and become a Magician.

With no hesitation, you step into the room; never before entered, and never touched save by your magic. The numerous spell books with which you store your spells are arranged for the ritual. With the first words of the incantation, they ignite; the many hued flames forming the circle of binding into which the entirety of your magical energy is poured. It is within this circle that the pure grey energy of your soul is expended and merged to create pure magic.

It has taken ten hours, but finally it is complete. You need only step into the energy and let it suffuse you to become a Magician; to become one with magic. You begin to step forward, but then see something unexpected: a woman with her hand pressed against what appears to be glass. You aren't sure why, but you suspect that becoming a magician will somehow break that glass...or perhaps the ritual is the glass keeping her from you. For the what is possibly the first time in your thirty years of pursuing this goal, you feel...nervous is probably the best word for it. Concerned. Hesitant, perhaps.

You know one thing with certainty, though. Complete the ritual or not; live or die, things are going to be rather interesting in the foreseeable future.

[ ] I've worked too hard for this. Continue!
[ ] What is this?! Abort!
[ ] Write in? <You have about ten seconds in which to act, before you die of sacrificing your own soul. Make it good, please.>
Author's note CensoredName  2012/06/15 (Fri) 21:15 No. 158563
Tvtropes linked me here, specifically to A Wizard is You. After a two-day archive binge reading that, my inner writer was getting restless. Here's my attempt to let it out, hopefully not failing horribly.

Yes, I am new here. If I break anything, let me know and I'll try to fix it.

Hopefully a CYOA will help me overcome my second chapter writer's block...

As a note on the story, I will not seek to avoid endings which might be considered as a "bad end," and I will not hesitate to kill our faceless, genderless, nameless character. I'll try to be nice, though.

2.) I don't believe that I stated that the story would end if the main character died or ended up in a bad end. It will just be a significantly different story if Ran is storming Makai to kill us again because we messed up terribly.

[X] I've worked too hard for this. Continue!

Just praying MC has a good reason for converting his own soul.

>I will not seek to avoid endings which might be considered as a "bad end," and I will not hesitate to kill our faceless, genderless, nameless character.

Word of warning: while supposedly the threat of bad ends keeps voters in line, you'll find that if your story is enjoyable enough, Anon will be sincere in its voting to see the story go places, and will be pissed if you spring a Bad End from (their viewpoint) nowhere.

2.) Due to the demiplane's traits, it is effectively using E5 rules (no getting over level five, ever...). MC sold his/her/its soul to effectively become a twenty-first level wizard for ten years. Now at the end of those ten years, he/she/it is sacrificing his/her/ its soul and the magical power from the deal in what is essentially a very inefficient version of the ritual that gave Patchouli and Alice immortality.

As for why the MC is a mage? Because that's what I know how to write for. I've tried others, but the disconnect from my mindset makes understanding the character rather difficult for me.

Sorry if I cross any lines posting like this. Thank you again for your advice.
Anonymous  2012/06/15 (Fri) 21:53 No. 158570
I've got some stuff, more to come later. Have dinner soon. Will expand on concepts after. Concepts also possibly both horrible, so might make new ones.

While you may enjoy the gamist side of it, remember that you're here first and foremost to write a story. Telling me these gamist elements, that he sold his soul for epic power before turning in said power for "mere" immortality... this is the sort of thing you have to tell us, the reader, in text. Some of us are going to get it, like me, but a lot of us (THPers) aren't.

[X]I've worked to hard for this. Continue!

6-2 continue/abort. We don't get to accidentally hurt Yukari right at the start, then...(thank you, anon).

[X] I've worked too hard for this. Continue!

The ritual is perfect. This is just a minor distraction. With a small smile for the figure, you step into the glowing energy. You can feel your form being altered and reshaped by the infusion of pure magical energy. The ritual is almost certainly working as planned. Arcane formulae that you once understood by rote now seem almost natural, even without the spells to guide it. Interesting, to say the least.

You don't know how long it is, but something finally snaps. You realize that you've just passed over the threshold and become a magician.

You also notice that you seem to be falling backwards, with a pressure on your shoulder. A hand...

As you spin around, you see the woman from before, pulling you into a strange kind of portal. Attempting to resist, you grab the hand and pry it from your shoulder. This throws you off balance, however, and in end up stumbling into the portal even without the woman's assistance. In the ensuing grapple, you manage to get a hand on her neck, but she simply laughs slightly and gently pushes you away.

You find yourself no longer in the sanctum where you had lived and worked for the past eight years. Instead, you're in what appears to be an endless deep-purple field filled with what appear to be eyes. To say that this is strange would be an exercise in gross understatement. At the moment, though, there is only panic. You can do nothing, though, due to the utter lack of air in this strange void.

Soon, the field appears to be enveloped by blue sky. Looking up, you realize that you just fell through another portal, which is now closing. The wind blasting your back tells you that you're moving rather faster than you would like. Instinctively making the motions and words to cast the fly spell, you find yourself disconcerted when it doesn't work. It does, however, turn you over just in time to see a large red object rapidly approaching. You don't get to hear the crack that comes with breaking through it head first, but you're not able to count this as a blessing as darkness consumes your senses.

When you come to, you note that you aren't quite on the ground yet. A figure, a girl you would guess, seems to have picked you up. Having just come to, your words aren't very effective just yet.

You would guess that your attempt at a friendly greeting failed, since you find yourself airborne again. You can just barely make out what was said, and it was in a language that you aren't too familiar with. Still, it sounded rather like a “Gods foreclose it, Violet!”.

You land on a long series of stone steps, likely obtaining further concussions. Still, you manage to keep consciousness. Since you're still alive, somehow, and don't appear to be under attack, you evaluate your priorities. Recovering your spells seems to be a fairly high priority, but then so does surviving to do so. Possibly the most important, for now, is to figure out where you are.

It might be possible to go up and ask the girl, now that you seem better able to speak. She didn't seem too angry. On the other hand, the stairs that she tossed you down probably lead somewhere...you can't see where, though, since your vision rather blurry for the moment. Seeking to add its opinion, your stomach alerts you again that you didn't eat in the three days before you started the ritual. Apparently immortal magicians still need to eat, which adds another thing to be taken care of immediately...

Life in Gensokyo is much easier if you're not on Reimu's shitlist.
Anonymous  2012/06/17 (Sun) 02:56 No. 158641
So...we have no spells for today? Not going to pester you for a list two posts into this story. I would like to know if we are or are not entirely helpless. Going under the assumption we have no spells and no way of healing our sky diving concussion...

You are magically enhanced a little by being a magician, but not too much. On the level of a physically fit human. Aside from that, and several-hundred gold pieces, you are without resources.
Anonymous  2012/06/17 (Sun) 03:23 No. 158645
[X]See where the stairs lead

Magicians actually do not need to eat food, and we should know the spell to do so because we just finished the ritual to learn it.

Improved character designs are coming up.
Anonymous  2012/06/17 (Sun) 13:02 No. 158664
>>158570
All of these have red eyes and black hair, the idea being it's common in Unnamed Prison Realm. I might do some more ideas when I have more time if I can come up with some interesting ones and voting on this hasn't started.

Female 1:
Hairstyle: Long and straight
Accessory: Carnation-shaped hairpin (Frilled Pink, to be specific)
Clothing: Kimono with some sort of design on it. Let's say of the fields/forests/caves/burning hell pits of our native plane.
Misc: All traditional Japanese manners and stuff.
Personality: Yamato Nadeshiko, pretty much.

According to the Perfect Memento article, http://en.touhouwiki.net/wiki/Perfect_Memento_in_Strict_Sense/Magician
>In the case of those who were originally human, in continuing their study of magic, it is when they learn "abandon food" magic (*3) that they become magicians.

However, I think the author stated that this particular magician used an inefficient version of the magic, so perhaps it just conveyed the immortality without the abandoning food.
CensoredName  2012/06/18 (Mon) 04:20 No. 158710
Calling the votes now.

Oh come on, he called votes a piddly four days ago; give him at least a week before doomsaying.
Anonymous  2012/06/24 (Sun) 20:50 No. 158982
I should be unhappy about this, given that I went to the trouble of making characters for this, but eh. I can use them for my own story, if I ever get off my ass and write one.
SettingsAppearance [X]