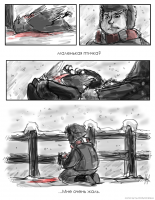 (Figured I'd do a TF2/Touhou crossover story. Probably been done before and this one is probably going to be a tad more serious. Not the most original I know but I wanna give it a whirl.)
The nightmares have started again. This time stronger and more forceful. It was harder to wake this time. Always the same thing. Sparrow, snow...death. He was registered in the system as Heavy Weapon's Guy #3452 but unlike many of the others he had formed an identity to call his own. He took to calling himself Ivan after a a night of poker when one of the players took to calling him it. The nightmare had been plaguing him every sleeping moment since that fateful day in the gulag. He nearly went mad trying to understand what it meant. Perhaps he was mad? Eventually he met 'Doc', the sole medic of his squad. They made quick friends and he did everything he could to help Ivan. Very little helped and eventually he started to prescribe Ivan with drugs of shady origin that all but stopped Ivan from dreaming . He had just run out and nightmare had changed. The sparrow was no longer a sparrow, it was a young woman. The boy was no longer a boy, he had become a terrifying ghost that sought to consume the woman with Ivan all but powerless to save her. When he woke his head felt like a triple hangover. Now he was outside 'Doc's office. Today was a rare day off from the usual terror of combat and bloodshed so he had the perfect chance to discuss the renewed nightmares and get a new prescription. Perhaps he could inquire about just what kind of heart it was 'Doc' put in him. 'Doc' was open about it with his other patients but he always kept a bit of a secret of it with Ivan. Perhaps he could inquire about some of the disappearance in the team. It was certainly not the work of a spy.

This could be interesting. Wonder if those drugs are just shady enough to be a certain lunarian's?
No. 158455
[X]Red

Guess I will break the tie. Not sure we'll get 'Doc' to tell us anything about our 'special' heart but non-spy disappearances and changes to the nature of our dream are certainly reason for concern.
Outside of what the dream may be implying I'm curious how Touhou is going to fit into this.
Nice use of stuff from Poker Night at the Inventory. Helps set 'Ivan' a bit apart from the usual depictions of Heavies.
No. 158458
Your story is, so far, one giant, annoying block of text.

Among other things, you don't use nearly enough commas, and you seem to just be stating things and letting the reader's imagination sort things out.

All in all, pretty shitty.
No. 158459
>>158458
This. Get better or get out, maybe go post and practice on fanfiction.net.
No. 158460
The enter key is your friend. Commas are also your friend. Avoiding abrupt transitions between sentences?

Friendly.
No. 158480
Because I'd feel bad if I didn't try and say anything, what with how you're getting shit on by all these anons, I just want to say, take what they're saying seriously. I mean, you're writing is actually okay, dare I say your opening line actually had me hooked for a second, but everything after that jumped the fuck around way to damn much, and you need to split this stuff up. Hell, do one liners, it's fine. Look, here's your first couple lines looking already much better just because it's been seperated, proof-read, and re-organized to make more sense.

-
The Nightmares had started again, this time stronger and more forceful. It was harder to wake this time, always the same thing. Sparrow, snow... and then death. The Nightmare had been plaguing him every sleeping moment since that fateful day in the gulag. He nearly went mad trying to understand what it meant. Perhaps he was mad?

'He' was registered in the system as Heavy Weapon's Guy #3452, but unlike many of the others he formed an identity to call his own.

And fuck, to be blunt about it, writing a story that isn't a TF2 crossover would sure as hell help with people being less pissy towards you. I really do hope you read this post. And possibly look into getting a proof-reader if you decide to try to ford the river that is known as THP's elitism.
No. 158487
>>158480

I suppose I'll work on improving and give this another shot some other time.

First time usually isn't the charm after all and I can't expect to magically produce a master piece on the first try.
Thread Watcher x—