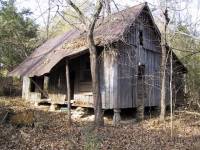 It would have been much more dramatic if I had woken from slumber, hunched over my workbench, to find my masterpiece complete before me, as if finished by the hands of my guardian angel, but I don't sleep much. Or at all. I get a little yawny here and there, but really, who sleeps at this time of day? Old people, that's who. And I am--

Not as a direct consequence, mind you.

It's just that since one happened, now the other will happen.

Terribly sorry, passengers, but another train of thought has jumped the rails ahead of you, so there'll be a little wait. No survivors. Very tragic. No need to worry, though, we'll clear it away and have you on your way in no time.

But Time never comes to visit any more, so I don't hurry myself getting ready to go out. Some might find it slow, but some aren't here; it's just me and my house, and my house graciously matches my pace.

Nothing worse living in a house that gets ahead of you all the time. Mirrors that reflect you before you've stood in front of them, doors that open before you open them, kettles that start boiling before you've even had the idea to fill them with water. Simply dreadful.

The forest pays me the same courtesy, as ever, which is only to be expected; few things can hurry a tree. The two girls that touch down before me, on the other hand...

"...Round." I look a little closer, my eyes tracing the curve of her plump, childish face up into straight, blonde hair, but my second glance only confirms my first conclusion. This is why I'm the best, after all. "Yes, something round would do nicely, I believe."

"Do you know what you would do nicely with, mister?" She tilts her head, and a beautiful smile is the reward for my flash of genius. "Some ketchup~"

Cats sup on rodents and such, I would imagine. I never asked, though.

"You're looking for a way to eat me?"

"No, mister, I've already found it!" So confident, so headstrong. Definitely round. "Now--"

"But you're not moving."

That predatory grin flickers, and she fulfills the not-prophecy-that-turned-out-to-be-a-prophecy by stopping in her nonexistent tracks.

"You're simply standing there. I hardly think it's fair to say you're on your way if you aren't even moving."

"Wh... what?" Confusion. A little anger, too, and she begins advancing on me again with a smile that looks more like an animal exposing its teeth, now, but mostly confusion. "That's not--"

"No, no, no," I chide, holding up a hand to bring her to a halt once more. "I'm afraid you've lost the way, and I expect you'll have a difficult time eating me if you don't even know the best way to eat a person."

"B-B-But--" Her furrowed brow only amplifies her childlike appearance, and before the confusion passes from her face once again, I--

"But you are in luck!" --act, waving a pointer finger in her face, the most well-known gesture associated with knowledgeable people. And angry headmasters. And disappointed parents.

And people with palsy.

"You are in luck indeed, because I have just the knowledge you seek! That most well-hidden of truths, that most obscure of facts, that most secret of secrets -- the proper way to eat a person!" The finger soars up towards the sky now, and the girl's eyes follow it, her attention nothing less than rapt.

"Is!" Its childhood dreams of flight cruelly shattered by its attachment to my left hand, my finger comes to terms with reality, settles down, and finds a nice job pointing eighteen degrees, twenty-six minutes, and fifty-nine seconds south of due east.

"Trust me, young lady, I assure you my experience in such matters is unparalleled." My finger puts in overtime at the job, continuing to point the way for the poor dear, and I make a mental note to add a little extra to its Christmas bonus for the trouble. "The best way to eat a person is most assuredly that way."

"...Oh... thank you, mister..." She's still a little dazed, but she manages to turn and walk in the right direction, and I give her an encouraging little pat on the back to send her on her way.

We may not speak any more, but I know Time, and Time is best friends with Space. It's only natural that I should pick up a few of their tricks.

"W-What... What did you... Where..." Back to the other girl. Even with the tears and the obvious terror, those are still lovely wings.

"Nothing more or less than it seems, young lady." My pointer finger calls it quitting time and comes back to be with the family, who act as one to make a sweeping gesture towards the spot that the little blonde girl is, was, and/or will be. "I sent her on her way." I smile. "Perhaps you'd like to follow her?"

"You'll see her again soon enough, young lady," I call after her as she flutters away hastily, taking those lovely wings with her.

It's the truth. Gensokyo is like home in that regard -- no matter which direction you're going, you're sure to lose your way.

Which reminds me:
I was going somewhere.

Okay yeah in all seriousness

"Good afternoon. I suppose you've gotten yourself lost looking for something again?"

"I'm afraid so. I don't suppose you might be able to lend a guiding hand?"

"For you, anything. I believe this door is the one you're looking for."

And so it is. Ever the gracious host, that Yukari. I consider staying for a while, if only to compliment her on her cat's good manners, but this door beckons.

This door is not attached to anything in particular, or anything not in particular, or anything at all. Odd, for a door, but then again, Yukari is odd for a person, and this door is her door. I approach this door and reach out to turn the knob, only to be struck by hesitation over whether or not knocking would be polite, in this situation. I ask this door for its opinion on the matter, but it remains silent. I ask Yukari for her opinion on the matter, but Yukari is gone; off to do other Yukari things, no doubt.

I pull on the knob.

This door does not open.

This door is stuck.

I continue to pull, judging the force on the opposite side working against me.

This door flies open in the opposite direction, the person on the opposite side losing their grip on the handle as she falls to the ground.

I politely avert my eyes to allow the person (another sailor?) to compose herself, feigning interest in the "Push to Enter" sign on this door until she stands once more, only then returning my gaze to her.

As a point of interest, my desires do not include a four-way tie for this choice.

>>149091
There is no statement whose truth I am more certain of than this: trying too hard is vastly preferable to not trying hard enough.