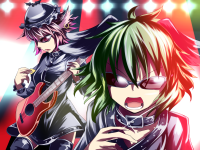 BREAKING NEWS
Novaya Braslavika precinct, Gensokyo-
Two members of the controversial punk band "Kitten Protest", identified as Mystia Lorelayeva and Kyouko Kasodanskaya, were placed under arrest by State Police after an unauthorized concert at the Myouren Temple. No further details have yet been released.

Anonymous 2012/09/02 (Sun) 16:16 No. 34899
>>34898
> drop ANGER
You loose a fierce shriek and slam your clenched fist into the concrete wall. If you'd been a human you would probably have broken your hand, but with your youkai fortitude you just scuff your knuckles slightly.
ANGER does not drop effectively.
HEALTH is not affected.
WALL does not seem to be damaged.

Anonymous 2012/09/02 (Sun) 16:56 No. 34902
>>34900
>examine cell
The CELL is a simple 3x5x2.5 meter room. The floor, ceiling, and three walls are constructed of reinforced concrete, coated with a layer of dirty beige paint that peels in places to reveal an even dirtier layer of greenish-gray underneath. The fourth wall to the north is made of rusty iron bars with a sliding DOOR in the center, closed with a heavy keyholed LOCK.
Along the west side of the CELL is a double bunk bed with a metal frame, thin mattresses, and ratty blankets. KYOUKO is crouching in the bottom bunk, arms wrapped around her knees. In the southeast corner are a dented metal sink and toilet. A single lightbulb lights the CELL from a recess in the center of the ceiling, and directly below it is a small drain in the floor.

Anonymous 2012/09/02 (Sun) 19:50 No. 34909
>>34906
> scribble on the wall a short poem about freedom, hope, and the inevitable downfall of the corrupt state
You combine your ANGER and the NEEDLE and scratch into the wall:
"They drug us to sleep, but forget that we dream.
They sew shut our lips but can't silence the scream.
They drown us in tears and burn us in rage;
And history sighs and turns a new page."
That didn't turn out quite the way you wanted, but it works.

Anonymous 2012/09/03 (Mon) 22:29 No. 34914
>combine WIRE and NEEDLE to create LOCKPICK
After about twenty minutes of fiddling around with the WIRE and NEEDLE, you get the manacles off of yourself and KYOUKO. Each of you now has the MANACLES free - a length of chain with arm and leg cuffs. In a pinch, they might be useable as garottes.

> impart some of your anger on Kyouko to help her survive the upcoming interrogation
KYOUKO jumps up and fistbumps you. She's looking a lot more lively now and less depressed.

> Examine ANGER
The two of you feel ready to rock.

>drop BASS
KYOUKO doesn't have her BASS with her! You'll need to get it back eventually, but there's more urgent problems. You hear the guard approaching...

Anonymous 2012/09/04 (Tue) 09:15 No. 34918
> hide LOCKPICK in your hair
Your hair isn't long enough, so you toss LOCKPICK under your blanket instead.
Clack. Clack.
The footfalls are getting louder, and the looming shadow of the guard approaches.
KYOUKO whispers in your ear: "Listen, tovarishchina, maybe we can lure him into our cell and jump him..?"
> Equip KYOUKO
You clench KYOUKO's hand tightly with your own.
Clack, clack.
>equip ANGER and MANACLES
You and KYOUKO are ready with your MANACLES and ANGER to act.
The polished tip of a boot appears at the edge of your cell.
Clack.

Anonymous 2012/09/04 (Tue) 11:17 No. 34920
> moan loudly and collapse on the floor
"Owww, my trochanter!" you wail, collapsing to your knees and clutching your chest. "It hurts, it hurts!"
GUARD appears, staring at you suspiciously. A PPSh-41 SMG is draped over his shoulder.
"The reactionaries poisoned me to keep me from talking!" you continue, and attempt to gag.
The GUARD sighs, equips a BATON, and opens the DOOR with a KEY RING and steps inside in preparation to club you into silence.
Attack screen open.

>use MANACLES on GUARD
You bide your time until GUARD diverts his attention to KYOUKO, then spring on him! You wrap the chains of the MANACLES around his throat and leap onto his back! KYOUKO lands a solid punch to the GUARD's hotbox, knocking the wind out of him, and the two of you dogpile him so he is unable to attack! As you tighten the chain with all your strength, the GUARD slumps unconscious on the floor. KYOUKO and you then chain him to the beds with both sets of MANACLES.
Items obtained:
KGB UNIFORM
KEY RING
TRUNCHEON
PPSh SMG (ammo 35/35)
Tokarev TT PISTOL (ammo 8/8)
Handheld RADIO
[P] Item x4

The DOOR is open.

>seduce
You sling your arm around KYOUKO's waist and steal a quick smooch on her lips. She blushes and stammers, "What are you doing, MYSTIA? You're my friend and all, but, but... I'm not into you like that...!"
You feel embarassed and hurriedly apologise, realizing that your band isn't Tatu and your story isn't taking place on /at/. ANGER decreases somewhat.