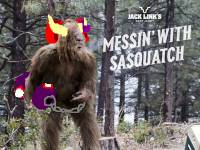 You are Jacob Chain, and you have balls of steel.

Your task is to play a prank on Suika Ibuki. Unwise? Certainly. Unhealthy? Undoubtedly. Hilarious? Definitely.

So here's how you play: You put your collective heads together and come up with a prank. This is not a story where you fear for your long-term survival, or bad ends. Much the opposite--you're shooting for the funniest reprisal you can get.

You get hilarious comeuppance by making the writer laugh his stupid head off at what you do to poor Suika. You won't die (permanently).

I have no idea how long this will run; until the joke stops being funny to people, probably. Hopefully our creativity and schaudenfreude will make this last for a long, long time. And with that, let us begin.

Maybe it's overconfidence born of your successful business ventures. Maybe it's the warm sake (your own label) sitting heavily in your stomach. Maybe it's because you were dropped on your head as a child. Whatever the reason, here you are.

Suika Ibuki is arguably the strongest being in Gensokyo. Legends say she hasn't been sober for over seven hundred years. And you're about to start fucking with her.

Passed out on the steps of the Hakurei shrine, midriff exposed, she snores lightly, a trickle of booze dripping from the gourd at her side.

Smiling with the Devil's teeth, you set about your business. She keeps that gourd on a length of chain. Carefully you steal over and lift the gourd--about as heavy as it looks--and slowly unwind the chain from around her. You even need to stealthily roll her over to move it from beneath her, sweating bullets the whole time. Finally, after a few tense moments, you've moved the entire length free.

Now you eye those long, antler-like horns on her head. One is adorned with a ribbon. Delicately you wind the chain over one side, slipping the last link down the length of the horn itself. You leave just enough slack to place the gourd on the end of the other.

Facing down, of course.

At first she doesn't stir at all. Slowly, though, the steady drip-drip-drip of sake running down her horn, through her hair, and onto her forehead rouses her.

"Ah...ah?" Mumbling incoherently she pulls herself up...and her head promptly falls to one side with a clunk.

With a yelp she scrambles over, spilling sake everywhere. The gourd wobbles this way and that, foiling her clumsy attempts to get to her feet. At this point you're barely keeping it together. She shakes her head wildly, shaking the gourd loose. It bounces this way and that as the chain unfurls from where you left it, swinging farther and farther from the oni's head with each go-round.

You have to duck the last as it reaches its full length, orbiting the little girl with its full momentum... and at last physics take their course as it snags on the opposite horn and swings around one last time, smashing her in the face.

That does it. You double over, laughing hysterically as she stumbles backwards, bobbing this way and that as she tries drunkenly to regain her balance. With a final 'whumph' she steps in a puddle of alcohol, topples over backwards, legs in the air, gourd resting soundly on top of her.

It hurts. You haven't laughed this hard since the Bloomer Immolation incident of '66. The tears flow as you gasp and cough. You still can't see when Suika hauls herself to her feet.

She takes the length of chain in both hands and begins winding up, kicking up dust around her as her gourd starts moving again.

She swings for the fences and hits you hard in the side with it. Part of you is wondering what happened as you impact a distant tree at mach one.

Suika is sleeping on top of the shrine's gate.

At your disposal is a length of rope.

In and around the shrine are the typical items, including the guardian statues, the donation box, and so forth.

[+] Tie her waist to the lower arch of the torii. Leave lots of slack between it and her.
[+] Hook her gourd to the chain hanging from her hair.
[+] Unplug gourd, light a match, and start up the Oni Sake Rocket.

Re: The gourd: Infinite, but I'd be willing to say its infinite line would go up or down depending on what was being poured out. As such it'd weigh more, or less, depending on how upturned it was. That plan can work.

>[x] See if you can tie her horns to the bottom of the gate arch. When she falls, she'll be hanging in the air from the gate by her horns.

It takes a little doing, but after a hefty donation, the shrine maiden is willing to part ways with some ornate rope kicking around in her storehouse. Isn't this supposed to be sacred? ...Oh well, it's for a good cause. Sort of.

Scaling the gate isn't too hard--you've done a little mountain climbing in the free time your wealth has provided you. Once on the top, you pull the rope back up after you, leaving it lassoed to one side of the gate. Now, to business.

Carefully you creep past the drunken oni and tie the rope to the other side. Still plenty of slack--perfect.

You nearly jump out of your skin when you feel a tug on the back of your leg. Suika's awake.

Thinking quickly, you press her gourd into her hands. "You need another drink."

"Eh? Never say no to a..." she doesn't even finish the sentence before the gourd is to her lips (with a little assistance from you.) After a long pull (does she even breathe?) her eyes droop and her head sinks back down. Whew.

Okay. Tying loops around her horns is nervous work, but the last drink put her out again. Carefully you snug them on, giving them each a second loop just in case, knot them, and then, bit by bit, remove most of the slack on one side and then the other.

Now the hard part. Climbing back down without your rope. It's hard and perilous, and takes the better part of an hour, but finally, you reach the bottom again.

Now to start throwing shit at her until she wakes up.

It flies end over end and clocks her square in the face. She snorts and rolls over with the bristles in her face. ...She mumbles and flails a bit, this could be it--

...dammit! She just pushed it off and it fell over the side.

You actually throw a little to the left, but when it hits the gate it makes a resounding clang. Suika yelps and starts awake hollering something about beans. After a second she gets her bearings. Squinting, she looks around wildly, murder in her eyes.

She locks eyes with you. You wave.

With a roar she leaps from the top of the gate like an animal. Her predator's lunge falls short, however, when the rope runs out of slack a quarter of the way down. Her head snaps back and cuts her howl off sharply and she swings like a teru teru bouzu.

You laugh your fool head off at her helpless flailing.

...Until, that is, she strains her neck muscles as hard as she can and rips the gate out of the ground. As she falls she wheels the whole thing around like a reverse swingset and brings it down on your head.

>[x] Hook up her gourd to a seesaw with a weight on the far end so it tips over when full, but when it empties the weight makes the gourd go upright again, filling it. Position it so there's and infinite sake waterfall going down the steps.

You admit to yourself this one's mostly for fun. "Infinite gourd of sake" has so many possibilities. It takes some palling up to Suika and several hundred thousand of your vast fortune in booze to put her out, but between your stock and her own she's down for the count. Carefully you slip the chain off her wrist and pull the gourd free.

You stashed the seesaw here in the shed a while ago--the miko apparently never goes in there. Hauling it out and setting it in front of the long stair, you square it just so and then make what might be the most literal 'drinking bird' toy ever construed.

"What the hell are you doing?" A sharp, critical voice from behind makes you jump. It's the Hakurei!

Arms folded, waiting for an answer, you decide the best way out of this is to pull a James Garner.

"Look! Money!" You toss a wad of bills onto the ground. She eyes it, and you.

"I know you. You're that Chain guy, right? The sake magnate? What are you doing around here?"

So it wasn't a prank, but a partnership is born. You pay the miko, she lets you do your dirty work. And maybe she'll even get in on a few of these...


Two down, three more to go. Heading to class now. If things go well* I'll have both this and my other story updated by the end of the weekend. Just wanted to post what I had to show you I'm not dead, I don't want to go on the cart, etc.