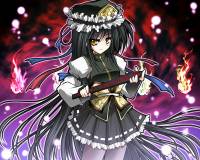 Ugh. I hate how short my debut prologue is.

Darkness suddenly faded away into light, and the sun gazed down upon your eyes. That? was all there was. Just this strange calming feeling, and the world around you. It was unclear who you were, what you were, why you were here, or where here even was. But it didn't really feel like it mattered. This was life? you were alive. And oddly enough, that was all you really cared about. However, lying in one spot for a long time gets very boring, and so eventually other thoughts began to creep into your empty mind. Maybe just being here wasn't enough. And if that were the case, it was necessary to find out some of these things. But one at a time was enough.

Oh, and it CAN be related. Depending on what exactly happens~

Three more posts / another one voting for figuring out what you are and I'll start writing again.

Rule is generally majority of 7 posts. Once 4 of the same have been given, if it's under 7 and I'm on, I'll close to go write.

If it reaches seven and I'm on, majority wins.

And there it goes.

>mailto:deleted
Email field does not work that way.

I try to clear the Email field, but it keeps putting "deleted" there for no reason.

Also, there are no wrong choices, only slightly more unfortunate ones.

See, while they triggered the flag that could have the worst end, they also started the UFO route. There's always a good thing to be seen from the bad.
Naito  2009/10/14 (Wed) 03:57 No. 27141
Hm? the most important thing would probably be to know about myself. You think, and decide that finding out what you are - and therefore, what you can do - is the best way to go. Looking down at yourself, you look human enough? there aren't any nonhuman appendages, or really anything to say for certain what you are. Two legs, two arms, both fleshy and soft? okay, that rules out animals. Unless you're some kind of animal spirit or Oni? Briefly worried, you feel around on your head for some type of unusual protrusion, like cat ears or horns.
To your relief, there's nothing to be found but your hair. Painfully pulling out one, you decide to check to see what color it is. Blonde. Okay, that's not too weird either. Now if only you had some kind of mirror with which to see yourself? but, naturally, you don't have one on you. Figures.
Looking at your clothes, they appear to be very generic, simple blue jeans and a red shirt, though you don't see any lint, stains - nothing that could show they existed before you were lying on your back in this place for a while. "come to think of it, you have no memory from before then, either. Is it possible you have just now come into being? But? despite that trail of thought, it contradicts what you know about birth, followed by the fact that you even know about birth. If you had just now been born, even if it was in a strange place like this, and with an already mature body, you still shouldn't know a thing. Instead, just your memories are gone.
A sharp pain goes through your head, and a sudden gust of wind blows in front of your eyes, stirring up the leaves in the surrounding area. Dropping to your knees, you hold your head from the shock, one memory, if you could even call it that, returns. A face? one that was far too much like yours, but with ominous dark hair and glowing red eyes, effeminate features twisted into the image of pure malice. You let out a small gasp from the revelation, as something about it tells you that this is a face to be feared - maybe even the cause of your situation at the moment.
Just as you try to sort through this new information, a voice calls out. "Hey, are you alright?" You look up to see red and white clothes? being worn by a girl with black hair not too far away from where you are now. Panic spirals though your mind, remembering the visage of that girl, and you try to figure out what to do. Has she come back to finish what she must have started?

Not to sound like an arse, but could you please use some formatting, e.g. have spaces between your paragraphs.

Do try to avoid them long paragraphs; when you start cramming paragraphs full of stuff, it becomes unattractive to read. To avoid cramming, all you need is to divide all that content into smaller "self-contained" paragraphs. As long as there is a fairly logical flow from paragraph to paragraph, folks should be able to follow what you are trying to narrate to them.

Believe me, I usually do. When I copy-pasted it from word last time, it kept them.

?That's good. "say, I don't think I've seen you around these parts. Who?re you?" The girl asks, her expression and body position showing more that she was asking out of formality than true curiosity. Even though she probably wasn't your tormentor, this girl really wasn't the friendly type.

You stop, getting up, not really sure how to reply. "Uh?. I don't really know, I guess. I just kinda? was here, and before, I was not." You try to explain the best you can, though it doesn't seem to appease her. The girl sighs with a look of dissatisfaction on her face. Now she had to go and actually TALK to you.

?Really? You should probably look around town, then. See if you know anyone." The image of that girl's face springs to mind again, and you shake your head quickly. The red-white seems to catch on. "Oh? is there someone you're trying to avoid?" She asks. After your short reply, she sighs again. "Well? I guess I should help you out?."

Her tone seems to indicate that this is a horrid pain for her, and you're not really sure what to say until she speaks up again, telling you to follow her. Not really sure what's up with this weird girl, you do hat she says? not like you have any other real option other than wandering around lost.

After a few minutes of walking, you come out near the top of a mountain, with a small shrine sitting near the peak. You make sure to remember where the forest she found you in was at, just in case it was relevant later. "So? this is my home." She tells you.

?You live in a shrine? So you're a miko?" The information flows naturally out of you. it's definitely not that you don't know about things, but that you simply don't remember the events of the past. Something that specific shouldn't be in your memory if you had just now come into existence.

?Yeah? though not many people visit this shrine, which is why I was surprised to see you back there in the forest." She explains. "I'm Hakurei Reimu, and this is the Hakurei Shrine." She opens the door, heading in, and you can see just how bare it is as you slip you shoes off outside before entering.

it's a large complex, enough for at least fifty people, but if the rest of the rooms are like the one you just stepped into, it's bare of nearly all furniture and decorations. Seeing the look on your face, Reimu decides to explain. "I'm just about the only one here. My family? well, it should suffice to say I am the last of the Hakurei line."

?I'm sorry." You say, feeling guilty. It wasn't like you wanted to bring up any bad memories or anything. Reimu looks a bit distressed for a second, before it's pushed out of the way for her usual nondescript expression.

?Don't be silly. it's not like I really ever knew them that much, and they always stressed my duties as the shrine maiden more than me even being their daughter? though I don't blame them. Not with how important the Hakurei line is to this world." Reimu said. "I'm just fine being here by myself, though."

You briefly wonder what to do - should you take her at her word and believe she's really okay? But you get the feeling she wouldn't take kindly to it even if you were to press the matter.