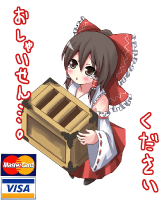 Was not, she is old, Reimu, had been planning to buy some tea in the market. (This is an important part of the life of tea anyone know!), Marisa has been gone, the store said that she met her tea. Reimu was very sad. If you have a cup of tea So she asked her Marisa. Marisa "to work for you is that I do not buy tea!" Reimu Marisa asked her how it should work. Marisa, "until the job is done!" Part-time, so in thrall Reimu Marisa. Marisa, a specialty mushrooms are collected from the world of work by Reimu she said. However, one did not know where Reimu then. Reimu to himself "you can take me to another world of thought Yukari!" Phantom Reimu stage I had been mixed Yukari 340 times. Then she was asked to be associated with any particular mushroom. However, associated with Reimu sent a strange land. January 1, and found himself Reimu Mushroom Kingdom. Yukari she was driven to an epic battle was just Reimu groove! Homing Reimu her enemies in every level of the amulets were flying over spam. The girl is thin, how to find mushrooms that are several cotton-throat, they are not the only special "mushrooms." Reimu, when the big city, she was hoping for something special. Koopa wizard was a MAGUNAMUBIRU more! Reimu collapse easily in all good time! And came out pretty skinny prince to fight hunger and to fight his source! Reimu "Why did the attacks, or ride behind you?" However, she did not have gray hair in Genji turtles that are not seen! Reimu and crazy, but the anger and rage, she'll turn the leg! She threw a needle in a fake Genji, he jumped! Needle, and flew under the turtle, earrings rope behind him. This is a break in the fall and turtle bridge. Reimu can float to ensure that, he knew the source said it was not. At the time, Reimu "heard to say thank you! I'm sorry, but the castle's princess." Reimu "I'm fine, I do not need a princess," he said. She was a special pleasure to see a mushroom, to her! Reimu to her good heart, it was a legitimate special mushrooms, knew the story. With joy, with a smile and a twinkle in the eye of light in the room Rumia case, had a special Reimu mushrooms. Cried because the story of a mushroom, he seized the prince did not like him! Reimu because his mouth is a sacred place the tags. It was sacred, he could still breathe. Yukari, the whole time, because she knew Reimu now time to return, was watching. She was there. Reimu Marisa took a special mushroom ", that is no longer a slave of your lord! Me my tea!" But, Marisa Reimu found her position! Marisa was a cup of tea! The market did not run! I could buy a cup of tea in her all along. Reimu and anger, and anger, but were full of turmoil and rage. Marisa ran the distance, a special mushroom Reimu is chased, she was quickly caught and Marisa. Since Reimu, he went to buy some tea market. Because, to care about who she is, she learned that her collection box was empty at the time. Reimu started crying. Reimu and that she had seen her coin pocket of Mushroom Kingdom! She coins made from precious metals are in a week when she was found to be able to buy all the value of the coin. So she has to eat the bread and a few weeks Reimu 80 Tai had purchased more than the value of the coin. Reimu was happy. JIENDO.
Anonymous  2009/01/25 (Sun) 08:21 No. 21752
Wat :V
Anonymous  2009/01/25 (Sun) 08:29 No. 21753 ▼
Image Source
File 123287574226.png - (12.63KB, 150x181 , Youlostme.png)