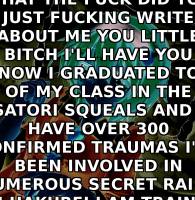 “THE TRUTH IS I applied here to find my father’s killer.”

“I am not telling you this because I suspect you are it,” I came on. “Nor because I expect you to lend me a hand. I am telling you this because I feel – for all the good my feels do – that this is something you and I had to share. Hopefully it gives background to some of my behaviours as well. I should think. You’ll say it isn’t the best motivation to enter a college, perhaps yes – but it is the one I have. Higher aspirations, well – those’ll have to wait. Hope you understand.”

A moment of bewildered staring followed, and, before I had anything else going, there was the straw again.


“Am I,” she began, stirring fizzle from the bottom of her glass, “supposed to be, I don’t know, impressed?”

Her eyebrow climbed. “What were you?”


Unknowing whether she was making fun of me, or if I had unwittingly relieved her here, I leant back silently on the supports of my chair.

Around us, immutable a world over, swirled the usual noises of the night in a city pub. Cheap 2000s disco playing on repeat, tinkling of glass, crackling commentary from a TV set arresting exactly nobody’s attention; and over all, words of several conversations blended into fine white buzz. For a moment I drew from my cup, soaking in the delightful mixture of smoke, talk and alcohol. Had ever freedom had a taste, it was this.

I set the cup down and slid it away with the stump of my hand. I smiled.

“Well,” I obliged, “there was more to it than that, which I wondered if you’d like to hear. Since we’re already here.”

“Well,” she replied, the corners of her lips curling up, “why not? Since we’re already here,” she added sweetly. The straw had stopped.


And it was then I knew I had her.

MY NAME IS David Hoyer. I am missing my right hand. This is the first you will gather of me at a glance, and for the good of you, make no other assumptions.

The inviolable fact of the world is, appearances mislead. Meeting a cripple locked to a wheelchair, laughing at the drool hanging off the edge of his mouth, you would be dismissing one of the greatest minds to live these modern times. Going back to the past and aborting a perfectly healthy baby in a line after four stillbirths, on the other hand, might have spared the world the debaucheries of Lois Quatorze of France. To truly know a person, you must first come to know them. Only afterward can you judge with any degree of confidence.

It was strange, to look upon the building which would become common sight in the pursuing years, feeling what might as good have been nothing. The slightest hint of curiosity prickled someplace at the back of my brain, yet the rest of my body was as cold as the wind sieving through the hair and clothes of students filing inside at a steady pace.

I was one of those students. The early coming of fall had caught us all with our pants down.

At the least I was silently grateful when the doors of the entrance hall first, then the audience chamber clamped shut behind us, leaving us to loosen the buttons of our stiff, ceremonial clothes. My suit, hard as though iced over, gave to the fingers of my remaining hand.


I told you the other was missing just then.


The chamber opened up to rows of folding chairs set before an unveiled stage, a part of the student body already making home in greater or less numerous groups. Upon the stage, an empty lectern stood foreshadowing the most dreaded part of any welcome ceremony. The speech. To be sure I was not one of those choice few who gave a care for this sort of thing – I doubted many of these present were – but it was the most efficient way to gleam some beginning information on the place. At the same time I hoped – quietly, to myself – this one would leastwise not put us all to sleep. How wrong I was, or if at all, I could not yet know.

Walking along the lines of seats I watched who I supposed more productive first-years scuttle about the stage: tripping on bunches of microphone wires, then in turn fixing the ones which have already been tripped on by someone else. Squeezing into a row which was half-full and filling with my fellow students, I listened to one mouth a furtive “one-two” into the mic. The system was functioning correctly, and the home-grown technician backed away from the stage. The others cleared as well. Lights were dimmed, and onto the stage waltzed a wrinkled stub of an official, clad in a suit which might have survived several wars for all we knew.


Among the clatter of the last of the students falling hastily on their seats began the most average speech an academic may feasibly conceive.


Casting around, I discerned the faces of my to-be colleagues. Too rapt faces, those – but to each their own; and if there was vital information being passed even then, someone must register it so that someone else may exhort it from them later. For the moment, I was content taking this gamble. This was not the first speech I’d had to weather those years, and if these people were to endure the college life, they had best make an early start of it as well.

To my right, far in the seated row, one of the heads swivelled briefly to capture my gaze, but just as soon, pretending accident, it rushed to the opposite direction. I noted the features, blurry at this range, and catalogued them for later perusal: long, flowing hair, bound for convenience into matching tails – glimmering with lacquer. A girl – the fact ostensive enough from her profile. With a bit of good old luck, I would have time enough the next day, when classes proper began, to divine what to do with it. For now I returned my eyes forward. None too soon.

At my side, about waist-height, someone was prodding the stiff plate of my suit.

“Trying to, yes,” I mouthed through shut teeth. “Though if you mean to the provost, by all means, assume I wasn’t.”


No reply was forthcoming. Hazarding the rage of the speechifying old man on the stage, I twisted around to look on my frowning neighbour. This one was, apparently, of the less fair sex – his suit, so like my own, attesting to so much – but here was a man who appreciated the products of cosmetology. To each their own, I reprised in my head, making out the faintest gleam of a lipstick. Yes, to each their own, now stop staring.

All the luckier I that my gaping was taken for a question in itself.

I shrugged my ignorance. “Aren’t we all?”

A shake of entirely too-long hair came in reply. “Not all. The students at the entrance were third-years. Stage workers were... mixed. I hear voluntary work goes toward your credit at this school.”

“I hadn’t noticed,” I said, meaning the third-years. “And I hadn’t known. Thanks.”

He – whoever he was – waved my thanks away. “Never mind. I’m just glad I don’t have to sit through this with my arms folded.”

“The pleasure is mine.”


I sat back, tilting my head and locking my attention on the tip of his knee beside me. My neighbour followed the hint and relaxed as well.


“You from here?” he asked after a moment. “I’m a local personally, but purportedly there’s been more and more outsiders coming in in the recent years. This is a small town, so you notice.”

“No, I’m from...” I hesitated. “Away. Transferred in at the last moment. Last of the third pickings, actually.”

“Digs. I can’t imagine living in a pigsty.”

My neighbour gave up a chuckle. I allowed myself a smile in return. “You live alone then,” he said.


I could not tell him why, of course. Nor had I the chance, even if I wished otherwise.

A freckled, bespectacled face glowed suddenly before us, turned from the row in front, shushing us with a finger across the lips. I put up my hand in a mollifying way, promising that yes, we were going to be quiet from here on, and the face went away. Alone again, I glanced sideways at my new friend, whom I found biting nervously on his lip. Here was an interesting factoid. However indifferent I might be to those tiny social gaffes, there were those whose reputation hung still on their paternal strings. Something, I learned just then, I had to keep in mind.

Fidgeting, my neighbour set his gaze back on the speechifying official up ahead. I watched him do so out the corner of my eye.

[ ] I kept talking still. Quieter, but I did.
[ ] I didn’t. I switched my attention to my surroundings.
[X] Neither. This is only a proof-of-concept scene after all.
No. 1517
But YAF, who was killer?
No. 1520
>>1517
No one. The protagonist is just a huge attentionwhore with a complex. Missing hand and all. No, really, that was what I had in mind when writing this.
No. 1525
>>1422
>This is a proof of concept that I can – or could, potentially – write an AU story which isn’t a complete trainwreck and actually has a comprehensive plot. This will NOT continue. Enjoy at your own peril.

>isn't a complete trainwreck
We won't actually know that, now will we?

>comprehensive plot.
Again, we won't actually know that since it's not continuing.