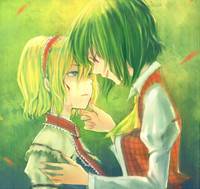 It's cold... dark... nothing seems to line up in your mind. Scattered memories cling to you, but they don't even feel your own, like the observation of another's life.

Slowly, you start to feel other things. The leafy ground below you, and the presence of many leaves covering your body.

There's an uncomfortable feeling as yet another lands on your face, and you reach up, with some difficulty, as if you haven't moved in a long time, and pluck it off.

Opening your eyes, you see the soft morning sunlight though the trees. There aren't many leaves left - not anymore, as fall is already in full swing, and the orange-brown colored foilage litters the ground... and covers you.

Is it possible you've been lying here since it first began? Your mind is filled with questions on who... and what... you are, and how you came to be in such a place like this, for so long a time.

With this in mind, you slowly get to your feet, and look around, trying to figure out which way to go.

Since you seem to be new here, I'll politely advise you that doing this is probably a bad idea.

East it is. Voting is closed, and I'll begin to write soon. (But first, food.)
Dark Grey  2009/08/07 (Fri) 23:31 No. 17347
You head into the sunrise, partially to view the beautiful morning colors, and partially because there's really no better place to start. Your feet pad along the ground, before you feel a sting - your foot makes contact with a hard object, and you instictively pull it back from the pain.

It hurts? That's not something you're accustomed to, and you, for the first time, realize you aren't wearing shoes. It's confusing, but then again, so is finding yourself lying in a forest in the middle of autumn with no memory.

Making sure to keep a better eye out for where you step, you tread onward, and soon come across a small house in the middle of a clearing.

There's a distinctly strange smell around it, and you can't tell what it is. After pausing a moment, you can tell that it's not coming from inside the house itself, but from a bit behind it.

Moving closer to the house, you hear sounds coming from inside it - but not that of a person, or anything living, for that matter.

Seeing piles of junk stacked against the window to the point where you can't see anything from this distance, you assume that someone, or something, must be moving though the rubble.

Head around back. That smell is suspicious [x]

Votes closed, you two are the lucky winners.

[X] Head around back. That smell is suspicious

You ignore the noise inside and head to the back of the house. As you proceed, the smell gets worse and worse... until eventually, you come around the corner and see a strange girl with... are those rabbit ears"... sticking out of her head.

She's examining a large cauldron of that foul-smelling substance, taking notes on the ingredients used inside it.

You start to approach, before realizing that it might not be best to disturb her in the middle of whatever it was... you don't want to become an ingredient, after all, and something tells you it's more likely than not!

However, your feet betray you again as you snap a twig as you back up, and her head snaps to look in your direction, entrancing red eyes staring right into yours with a piercing gaze.

(Starting now I will be posting the would-be results you did not choose from a few posts before.)

With this in mind, you slowly get to your feet, and look around, trying to figure out which way to go.

Introduce yourself as you ask where you are and such; while avoiding eye contact (this is Reisen we're talking about here, even eye contact can cause a bit of insanity)

In the middle of writing it, my computer killed itself... T_T It was such a great wall of text, too...

Hey I'm not the one going by last name to identify them.