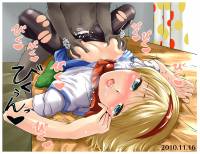 She moaned softly, her head still throbbing with pain. Coherent thoughts fell apart when she tried to grasp them; soaked papers floating atop the sea of unconscious thought. She tried to open her eyes, find light, surroundings, reality, but only darkness greeted her vision.

“Rise and shine, you fucking bitch.”

Alice started at the venom in the voice. She squirmed, trying to push off the mattress with her hands – and began thrashing madly when she discovered the leather thongs tying her wrists behind her back. When these exertions revealed the bindings on her ankles, thighs, and elbows, the blind panic of a trapped animal swept over her. So securely bound, she could do little more then squirm, and squirm she did, twisting and contorting wildly, hurling incoherent screams into the balled up cloth in her mouth.

Cold laughter interrupted her struggles, and she abruptly ceased her thrashing, as if she might evade detection.

A fingertip pressed against her big toe, then played up the sole of her foot with gentle pressure. A hand cupped her heel, then gently grabbed her ankle. From the ticklish sensation, she realized she was still wearing her hose. The hand slowly felt its way up her leg, enjoying the gentle swell of Alice slender calf before splaying out to savor the firm muscles of her thigh. Alice whimpered with terror as her captor’s fingertips slipped between her thighs, tracing the inseam of her stockings up, up, up till his thumb was rubbing small circles into her ass.

The bedsprings creaked and rattled as something heavy pounced, and Alice squealed into her gag as the man straddled her back. A strong hand gripped her jaw, and lifted her head, craning her neck back painfully.

“It’s gonna hurt,” his hot breath whispered into her ear.

For a moment, Alice forgot to breathe.

“Oh yes, honey.” The hand on her jaw shifted to clamp over her mouth. His tongue flicked at her earlobe, tracing the crevices lightly, lovingly. A tremor went through Alice as he thrust deeper, filling her ear with the wet slush slush of his tongue. Alice strained her eyes desperately, trying to see anything, anything to focus on besides the casual violation of her body, but it was still pitch-black. Through her panic came the realization that she was blindfolded.

Alice’s tormentor lightly traced his fingertips up her side, then slipped underneath her chest to cup her small breast through the thin fabric of her bra. It was little more then a handful for his big paw, and he took it eagerly, squeezing and kneading it painfully in time with his tongue-thrusts. Through the gag and his rough hand Alice continued her breathless, futile screams.

An eternity later, he ceased. Alice emitted one more muffled sob as she felt a bit of the monster’s saliva trickle out of her ear.

Alice whimpered with every heaving exhalation.

“Oh, too bad,” he said with relish, and pinched her nipple through her bra as hard as she could.

“What a little crybaby bitch,” her attacker sneered, twisting the nipple viciously. Alice thrashed and squealed, but he simply tugged and twisted her nipple a bit more. “It gets worse.”

Alice felt the pressure on her back lift, then the world spun as she was flipped over, handled as easily as a little doll. She felt the bastard mount her again, but this time he didn’t hover over her. Alice wheezed with pain as he settled his full weight on her taught belly.

Now both hands fell upon her breasts, fingertips digging as deep as possible.

Her captor was a big man. She felt him lean forward, putting more pressure into his iron grip on her tits.

True terror gripped Alice as her total helplessness hit home. With her captor sitting on her belly she couldn’t even squirm. She could only scream as his vicious hands tortured her body at will. His hands savaged her cute tits with deliberate malice, squeezing painfully before twisting her slight bust this way and that. Pinching her nipples, he pulled on them as hard as possible. Her belly flexed deliciously against his crotch as she tried to arc her back, tried to lift her chest and lessen the horrid tension on her delicate nipples, but she couldn’t budge an inch.

Finally he released her, and Alice’s entire body went slack, trembling with pain and fear.

The pressure on her belly lifted as the man shifted a bit, and Alice desperately heaved for breath while she could. The bastard idly traced circles on her belly as he waited for her to recover.

Eventually, Alice felt powerful fingers twist into her scalp, and she was painfully hauled into a sitting position. The bedsprings creaked as he straddled her lap, his free hand gripping her bare shoulder. Alice struggled to keep silent as he nibbled her neck, sensing that her pain excited him, but when he bit down hard on her clavicle she squealed.

“Noisy little bitch,” he breathed raggedly. He wrenched her head to one side and slowly moved up her neck, nipping and sucking as hard as he could. Alice keened softly, her tears soaking into the blindfold and trickling down her face as the bastard energetically molested her.

He yanked his fingers out of her hair, cupping her cheek instead. “Mmmph” he murmured, licking the salty tears off her other cheek. He released her shoulder, reaching down to pinch her ass painfully. A rough finger snapped the elastic band of her panties, then slowly traced over her bound wrists and up her spine with the pressure of one fingertip, still licking her cheek.

Alice realized she’d started trembling uncontrollably, and couldn’t seem to stop – a spasm of horror seizing her entire body. Her assailant snapped her bra strap, then traced her spine to her neck. She felt him tug at something on her nape, and a bit of twine went tumbling down her chest. His fingers dug into her mouth.

“Oh!” Alice gasped as the ball of cloth was plucked from her mouth. Her captor cupped her chin, clamping down painfully on her jaw.

“Gimme a kiss, honey,” he snarled, and forced his lips onto hers. Alice fought to twist away, pressing her lips together with desperate strength as his tongue tried to force between them. The hand on her cheek slipped ‘round to grip the back of her skull, pressing her mouth against his, but Alice kept her jaw tight.

Finally, his mouth abandoned hers, and he released her jaw. She sniffed miserably, her breast quivering with shaky breath as she tried to control her terror.

Pain exploded in her belly, and her breath rushed out of her with a weak little “guh!” Shaking, she tried to pull another breath when the man slammed his fist into her belly again. This time her little ass lifted clear off the mattress for a moment, and Alice saw stars bursting in the darkness under her blindfold. She tried to curl up around the pain, but could only draw her knees up enough to bump into the kidnappers rear. Coughs wracked her as she fought for air past the agony.

The man let her writhe for a few moments, then shook her head around roughly by her hair.

“Feeling romantic yet, bitch?” he snarled into her ear. Alice just panted, boneless in the monster’s grasp.

“Good,” he said with relish, and pressed his mouth to hers again, gripping her chin with his free hand. This time there was no struggling, no resistance from the battered little blonde. His tongue forced past her lips and thrust deep into her mouth. Tilting her head with his hands, he got a better angle and deepened the kiss, raping her mouth with his tongue, exploring every crevice.

Alice had stopped fighting. Her kidnapper had free reign of her body, total possession, and he sucked and savored her mouth at will. The blonde magician had lost all coherent thought; her every motion and sound a mere instinctive reaction to every tweak and torment her captor inflicted upon her.

After an eternity, he withdrew with a wet shluck. Alice’s mouth dangled open, a string of their shared drool linking their lower lips.

He released her, and she fell onto the mattress again limply. The kidnapper pressed his palms against Alice’s sore belly and slowly slid up her body to her chest, then seized her bra and tore it off. The little blonde quivered as the cool air hit her bare breasts.

Alice felt the man slip off the bed. There was the brief rustle of fabric, and suddenly his weight settled on her again, this time right on her chest. His bare thighs squeezed her ribs painfully as he saddled up. The pale skin of Alice’s small breasts were already splotched with rising bruises from his earlier torture, but her bra had afforded at least some protection.

“Cute little tits, bitch,” the man growled, leaning forward a bit. “Lets see what they’re good for.” He leaned forward further, and Alice felt something stiff and hot rub against her chest.

“NNAAH!” Alice squealed, a tremor of revulsion quavering through her body.

The monster’s hands fell upon her breasts, strong fingers digging into her unprotected flesh as he took tight handfuls.

“Yes,” he breathed. Alice’s modest, perky breasts were too small to rub together, but her captor did so anyways, stretching and distending her delicate little tits until they were mashed together. A full-throated scream tore from Alice’s throat as pain speared her. The man slowly slid his cock up her chest, forcing it between her bruised tits. Alice gasped breathlessly, the heat of his engorged member vivid against her chilly skin.

Groaning softly, her rapist began sliding his cock back and forth between her painfully-distended breasts; bruising them still further with the assault. Alice struggled against his weight for breath as he violated her. Her strength flagging, she could only sob weakly as he increased the tempo of his thrusts, fingertips digging even deeper to tighten her flesh around his penis.

Alice’s pale skin was smooth but dry. As the kidnapper continued to thrust, his precum slicked the hollow of her breastbone, and his grunts became more strained as he fought harder and harder to restrain himself. Every thrust was heaven, his scrotum rubbing against her heaving diaphragm to nestle in the notch of her breastbone, feeling the runaway tempo of her racing heart beating against the bottom of his shaft. He squeezed and wrenched at her breasts for all he was worth, ripping another shrill scream from the petite blonde’s throat. Her pain and terror fueled his lust; her heaving diaphragm squeezing his balls harder, her frantic heart drumming against his shaft faster. He leaned forward even more, putting his weight behind both assaults, milking Alice for every ounce of agony as he mashed her tits even tighter against his throbbing cock.

“That was fun... for me,” he wheezed, finding the breath to chuckle weakly. “Guess you weren’t... ready. For this.” Catching his breath, he sat up and hopped off the bed, looking back to admire his handiwork. An ugly bruise was swelling on her taught belly, and his handprints were rising in purple on her tits, like brands.

“Silly little bitch still plays with dolls,” he sneered, hate honing his voice. “Didn’t think they’d play back, did you? And we’re just getting started.”