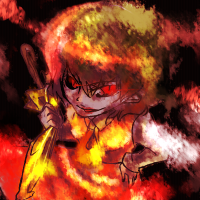 You wake up in a flower field.

You see a displeased woman with green hair and a parasol standing in front of you.

She then swings it at you and cuts your throat wide open, killing you.

"And when you woke up, Yuuka was still there."

Thank you so much.

I really liked your characterization of Yuuka. A lot of depth and complexities, while still very mindful of the source material. While her introduction was handled rather well, I'm particularly fond of the scene where she cuts the main character's throat open. More than any other scene, that was truly the defining moment.

That said, the beginning of the story was a little lacking compared to the rest. I can't really place my finger on it, but it lacked the same 'impact' of the rest of the story.

A story with an end? On my THP?

Anonymous  2010/02/09 (Tue) 22:04 No. 546 ▼
Delete Post
Report Post
>>543
The oddest thing a man can do, and that is besides wearing a dress and putting his hair in curls
Is writing about little girls
Especially little girls that are not real, and were never ever real in the first place, and even if they were real they would never give you even a single trifle
And then is excusing the fact that if they were real they would be on the other side of a nearly impassible boundary, so that means you would never even manage to get an eyeful
And even if you somehow manage to get past that impassible boundary and catch yourself the fleetingest of the fleetingest of glimpses
There's no way you would be considered among the local himses
So when I see stories about never-rise grey-faced mumblers like you somehow managing to charm the skirt off some powerful and sadistic torturer of a regular human being
I get to laughing so hard for so long that by the time I'm done I have to get up from in front of my computer and go to the toilet to have a quick peeing

...Well, once he understood the context.