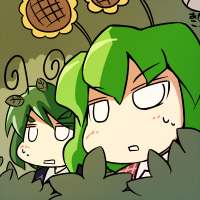 You remain silent through Wriggles sulking.
"Come now, Wriggle. It's not so bad. I'll be able to train you again soon if you stick to the program."
"Ah, alright. Wriggle says. "But what about him?" She asks, jerking a thumb in your direction.
"Eh?" Yuka asks. "What about Sunny?"
"Why are you training a normal human? It doesn't make sense."
"He's not a normal human." Yuka says. "Suffice it to say, who I train is my choice."
"All right. I understand." Wriggle says. She still seems a bit dejected and judging by the glances she keeps throwing your way, she will just take it out on you.
"For now he's a visitor and my guest." Yuka says with a hint of frustration in her voice.
"Ah! that reminds me! I saw that strange girl hanging around your house." Wriggle says
"eh? Really? What strange girl..." Yuka says with a frown at the news. "Well... Lets take a break for now."

You take a seat on a nearby rock while Yuka goes to confer with Wriggle in private. It occurs to you with your new enhanced senses through magic you could listen in to what they are saying, or perhaps it would be best to just sit and rest as Yuka says.

[ℤℯ] Practice your senses by observing other stuff, give the two some privacy though.

Can't delete the old one.

Sunny taking in the sun~

While Yuka and Wriggle talk, you decide the best thing to do is to practice what you've learned.

You slowly succumb to your new senses and just observe your surroundings, watching the sunflower field around you with new eyes. The gentle colors of the field and the light of the sun lull you into a tranquil trance.

A hand on your shoulder jolts you out of your reverie.

"We should head home now." Yuka says with a look of concern.

Oh Wriggle boy, the pipes, the pipes are calling
From glen to glen, and down the mountain side
The summer's gone, and all the flowers are dying
'Tis you, 'tis you must go and I must bide.
But come ye back when summer's in the meadow
Or when the valley's hushed and white with snow
'Tis I'll be here in sunshine or in shadow
Oh Wriggle boy, oh Wriggle boy, I love you so.

And if you come, when all the flowers are dying
And I am dead, as dead I well may be
You'll come and find the place where I am lying
And kneel and say an "Ave" there for me.

And I shall hear, tho' soft you tread above me
And all my dreams will warm and sweeter be
If you'll not fail to tell me that you love me
I'll simply sleep in peace until you come to me.

I'll simply sleep in peace until you come to me.

>>411
>The summer's gone, and all the flowers are dying
>'Tis you, 'tis you must go and I must bide.
Strangely appropriate for our Youkai Moe~

I have a bit written of the next update but its not really coming together as I'd like. It introduces a character that I'm finding hard to write, but soon I'll have her pinned into submission. She'll soon be begging for another taste as my pen is striking hard and firm against her soft supple parchment, her pleas for mercy unbidden as each swift stroke falls upon her... am I even talking about writing anymore?

Speaking of... I'd just like to say that I'm not going to arbitrarily punish you for exploring the world around you or even the other characters around you.

if you know what I mean.

But no, what I truly mean is, if you do something bold, I'm not gonna punish you for it. I'm not going to kill all productivity by linking to that terrible tropes site but you can get away with some things if you're careful and especially if there's no real way for anyone to detect what you are doing.

I don't believe in arbitrary bad ends. I'll warn if an action comes close to a bad end and if you do get a bad end from me, you'll have earned it.

One thing I've noticed over the last couple of updates is a passive stance by you guys, and I should tell you guys certain characters may admire bold actions. Some more than others for sure, but something for you to think about certainly.

But ultimately you guys give the input for this anon so what you decide goes. I'm not going to tell you how to vote.

Have some delicious youkai moe while I hammer this out.

If it's who I think it is, then she would probably like that very much.

But again, that might risk breaking character, so it'd be more curious than audacious if a bold action is done.

Too bad our MC isn't a female, now that would've given me a moevitus and half

What a drama queen.

"The day he fell from the sky is one I won't forget." The voice unexpected as we huddled around the campfire in the dark trying to stay warm. The speaker a fellow refuge we've come to know as a silent type that keeps to herself. Earlier in this blasted night we were swapping stories with one another to make the darkness seem lighter and now that the children have gone to sleep we had gotten a bit more daring with our stories.

"My teacher was the one who found him, in her garden, and nursed him back to health. I met him later. The thing I remember most about him was his warmth. Well, besides his confusion to the world around him as if seeing everything new for the first time. He was... gentle and if I'm honest I think I liked him too, but not like my teacher did. She came to adore him and he her." she says, looking slightly sad as she begins her tale.

Several of the men who had left the fire to seek refreshment have come back now to listen. We didn't know it yet but the tale we were hearing was one that we wouldn't forget.

"I remember how funny he was. The time when we went out to celebrate his learning to fly at Miss Fujiwara's pub, and he didn't know what alchohol was. He got so drunk he flirted with Miss Fujiwara, right in front of teacher. He ended up making Teacher so mad that night that she snapped her parasol. I remember how he apologized to teacher with that lovely new one made made just for her and they made up and while they acted like nothing happened the next day we knew that they were together that night."

"He was a great friend to me, a wonderful sparring partner and kind to my friends. He never treated us like a nuisance or a bother and when Cirno dragged him out to play with us he made time. I remember when it started. When he started to remember things that confused him. It happened the first time when he was sparring with me and he knocked me flat. I remember afterwords he was so confused that he walked in on me while I was bathi--" she suddenly stops and turns red.

She sweeps around, challenging us to say something but the folk around the fire know better and are too enthralled by her eulogy besides.

"I eventually accepted his apology for that, and for him knocking me flat during sparring." she begins again after a moment. "It was around then to that the light started to dim. The sun would set earlier and rise later unnaturally so for august. And Teacher and Sunny just grew closer and closer together. He just had a way with people that drew you in with his friendliness and even when it started to get dark he had a way of calming people."

I remember him, vaguely, the man was often at Mokou's. He and Mokou weren't exactly friends but he was one of her best customers, often dragging people in for a drink with him from the street. when things started getting darker and people started fighting he would drag them in and settle any disputes over alchohol. I'm a bit surprised after hearing how he discovered the stuff because he'd always call his drink "Humanities friend." I mention this to the group. The green haired girl looks at me, happy someone else remembers him but he'd be hard to forget.

The green haired girl begins to speak "E-eventually we figured it out. What was causing the--this." she says, choking up now as she gestures to the darkness around them. "That's where they went tonight, Yuka and Sunny. To.. fix this. and we'll know soon if it worked." She begins to choke up as she wails, "H-he's not coming back!"

a slightly older lady puts an arm around the young girl giving her comfort and for the next few minutes there is silence around the campfire. Then I do something spontaneous. I stand up and take off my hat.

I'm not alone. The man next to me stands up and removes his hat as well. Then another, and another until all the men are standing, silent, hats removed in a moment of respect for someone well known around town, someone who had become in the short time he was with us the bridge between our human world and the one outside the village full of strange and wonderful creatures.

And at that moment, blessed dawn broke over us for the first time in a week and we knew the suns warmth once more.