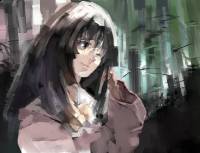 Reclining happily Tewi pats her belly with contentment, throwing down her spoon with a clatter into her bowl. Dutifully Reisen stacks the dirty dishes away with a domestic grace, the gentle midday sun provides a golden veil to this scene casting everything in a serene light. A picturesque moment in the Eientei mansion, the residents enjoying a home cooked lunch.

"Thanks for cooking again Reisen," Tewi pipes up cheerfully. "You always make the best meal!"
"I concur whole heartily, you'll make a fine wife one day Udongein."
Blushing at her master's praise and the insinuation it carries with it, the lunar rabbit accepts their kind words with a happy smile.
"Thank you master, it's nice to be appreciated."
"Then allow me to add my compliments to the chef, Inaba."
"Lady Kaguya? Thank you!"

It was a rare thing for the princess of this happy little family to be moved to such open thanks, while she was always the paragon of good manners it was the mark of something special in this house when she would openly praise someone. It wasn't everyday that the ladies of Eientei dined together but when they did, a happier home you could not hope to find. Lingering at the table to enjoy one anther's company, tea is served while they gossip and chatter, as ladies are wont to do.

"Oops! Sorry about that!" She said jovially with barely a hint of shame.
"Tewi! Manners!"
"Of come on now Reisen, it was only a little poot! Happens to everyone!"
"It's not very lady like, even if that's true!" Taking off her apron, Reisen scolded her. With a sly look Eirin turned to the little earth rabbit.
"You know Tewi, I have some medicine for indigestion if you'd like."
"Uhh, no thank you."

There was something about her face that made Tewi think twice about accepting that offer, she had heard from Reisen about her master's frequent use of live subjects in her drug trials and had no intention of endangering her precious health like that, she didn't live as long as she has by drinking every snake oil on the market after all.

"Inaba," With a soft smile, Kaguya spoke. "You say it happens to everyone, yet that isn't entirely true."
"Huh? You're talking to me?"
Kaguya nodded, while a very courteous person the princess never bothered learning the names of the rabbits who served her, times like this Tewi couldn't be sure if it was Reisen or self who was being spoken to.
"What do you mean? It's only natural, right?"
"Haven't you ever heard?" Sharing her friend's mysterious smile, Eirin raised a finger like a school teacher giving a lesson.
"Kaguya never does such things, it's part of being a princess!"
"What? No way, you guys are trying to trick me!" Uncertainly, Tewi turned to Reisen, whose opinion she always trusted. "That's not true, is it?"
"Hmm?" Amused by her usually deceitful friend's trust, Reisen gladly took part in the private little joke, resting her chin in her hands a cunning smirk on her lips. "Well, have you ever heard Lady Kaguya, uh, indulge her self like that?"
"Oh, guess not."

"A princess, eh?"
Arms folded, a concentrated frown on her face Tewi considers the facts, muttering to herself. Abruptly she hops up onto her feet and dashes out the room, calling behind her.
"Thanks for lunch, Reisen! See y'all later!"
"Oh my, where is she off to in such a hurry?" Reisen wonders out loud, looking after her. With that Eirin and the princess also begin to make their exit, getting up to thank Reisen once again the pair make their way through the still, sunlit halls of Eientei. At this time of day the rabbits would be out playing in the forest, Eirin would soon return to her work leaving Kaguya alone in the solace of the silent manor. Some days it could be oppressively lonely but on a sunny day like this the time by herself had an appeal of all it's own, if she got really bored she could always go provoke a certain someone after all....

A shady room, hidden away in the heart of Eientei, down a corridor no one visits behind a door like any other, Kaguya sits in her most private chamber. It's shady and cool in here. Luminous golden shafts streak down through the narrow slats of the window catching not one mote of dust, casting the tiny cell in stark lights and shadows, highlighting every stark white angle of what dominates the center of the room. Subtle scents of lavender flower soap, freshly washed cotton, clean crisp water and musky wood tickle her nose as the princess slowly slips her delicate, silk under garments to the floor exposing her long lily white legs as she does so.

She shivers, half at the feeling of the air touching her most intimate places half in anticipation of this moment, even though she discarded no other clothing she feels scandalously naked. In a sense this has become something of a ritual to her, where she cleanses herself to be truly pure and continue to be the perfect, eternal princess.

The porcelain is cold against her skin, making her flinch away at first as she mounts it but soon it yield to the warmth of her lustrous flesh. A trembling sigh escapes Kaguya's lips, her soft, round buttocks spread gently apart as she hitches her skirts up.

This pure, perfect instant before she begins, is almost as satisfying as the one about to come. Even her heart is racing, her whole mind thrilling at the prospect of what's to come, at the feeling mounting inside her almost ready to burst.

A gasp parts her perfectly shaped lips, like two petals pressed together opening into a lovely flower, deep within herself she feels something move. Slowly, slowly at first her most obscene hole begins to twitch and convulse, her body clenching and releasing in a beautiful rhythm.

Peeling away the surrounding muscles, a sleek, light brown turd begins to slip it's way past her pretty little anus, pink with the effort already. The sheer size forces her open, a tremendous shit pushing against the walls of her body with it's shocking size, stretching her in a way almost orgasmic.

A husky breath, followed by a rapturous moan escapes her, tears of pleasure forming dew on her eyelashes. With ever inch of herself wrapping around the crap, stroking and caressing it with her insides she writhes with the delicious sensation, barely able to keep her legs together they spasm with every new effort. Desperately she wishes she could see it, so that she might rejoice in the mighty thing she births from herself with such perverse enjoyment.

It's almost all too much, the length of the awesome shit prolonging the sensations to extremes and the thickness spreading her almost further than she can go. The air becomes thick with the pungent, almost sweet stench of her feces and the pathetic mewling of her breathless pleasure. Gripping under the rim she tosses her head, sending her ebony hair cascading around her and bites her lip.

With one last happy grunt she forces the vile thing out of her, anus pinching off the end like a mouth biting a sausage, making her groan with delight and soaking her buttocks as it enters the water with a mighty splash. A number of lesser shits tumble from her quickly after, in rapid succession, making her shiver with a lesser delight and forcing her to lose control of her bladder, sending a stream of golden piss after as a chaser.

For a time she sits there, catching her breath, reveling in the after glow of the heinous act. Without leaving her seat, she doesn't want to spoil herself by seeing her achievement just yet, she takes a slip of paper and slides it between her sullied cheeks. Rubbing her dainty hole much like a lover would, gently poking it with her finger through the paper. Then satisfied with work she removes the slip, raises it to her nose and takes a grateful sniff.

"The key to being totally pure in the eyes of others," Kaguya thinks to herself, as she looks fondly at that little part of herself laying in the water, her hand on the handle.
"Is to keep all your impurity in one little black spot, of total corruption. Then hide it away from the sight of others."

A girlish laugh, a gush of water, the sound of a girl humming to herself as she washes her hands.

"Oh! Princess!"
"Hmm, Inaba? What are you doing in this part of the house, dear?"
Sheepishly the shorter girl runs her hand through her the messed tangles of her hair, being careful of the garland of flowers crowning it.
"Oh, me and the rabbits were just playing. Is this hall off limits?"
"Of course not my dear little Inaba, I'm just surprised to see anyone else down this lonely path."
Carefully, so as not to disturb it, Kaguya reaches out to the garland looking at it fondly.
"What's this? I didn't know such pretty flowers grew around here."
"Huh? Oh, yeah there's lots of them if you know where to look." Shifting from foot to foot, the earth rabbit blushes.
"Me and the rabbits were playing princess and a princess has to have a crown or a tiara right?"
"Really?" Hiding her smile behind her sleeve, Kaguya giggled slightly.
"But if that's the case, where is my crown?"
"Huh," Tewi frowned. "You want me to make you one?"
"I think, Inaba, I would like that very much."
Anonymous  2009/03/20 (Fri) 01:30 No. 79486
...........