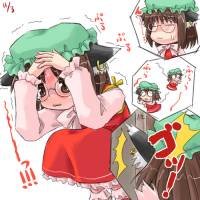 A single step brings you out of the pool of the light, cast from within the kitchen, into the relative darkness next to it. The situation before you unfolds quite quickly after that action. Above you, there’s a clattering noise, like someone climbing out of a window. You can’t see clearly but it looks as if the raven haired girl is sneaking out of her room. She lands, almost silently on the top of the garbage cans. It pushes down the lid, sealing the can shut. The figure looks around for a moment, as if trying to decide anyone’s there. It starts to move, but then stops suddenly. Cocking it’s head to one side it seems as if it heard something. Your breath catches in your throat as the figure, still perched upon the garbage can, stares into the darkness where you’re standing. It’s a long, tense moment as it continues stare into the darkness which you hope is still hiding you. You make ready to run, however, the can beside the figure rattles again. The figure, startled, jumps down from the garbage cans, now ignoring the rattling one, before running off into the night.

You breath a sigh of relief. Whoever that was, you don’t think that they saw you. But, Well, that’s certainly not suspicious. Not at all. You’d chase off after it, but you have more pressing matters to attend to. The rattling noise coming from the can the girl landed on is louder now. For a moment, the rattling stops before it resumes with a new fervor. The can begins knocking back and forth quite violently before falling over. Now on it’s side, the can rolls on the ground knocking into the other cans before it bounces up next to you. The lid comes blasting off the can and a very perturbed little girl rolls out of the can stopping on the ground just in front of you, legs akimbo. In the light spilling out of the doorway, you can see that this girl has cat ears and two tails, which are swishing madly back and forth.

“Ooooo. . . That wasn’t nice. . .” The girl’s green hat seems perched precariously on her head as she rocks back and forth slightly. She slumps forward, hands on the ground, head between her knees. It would seem that she’s trying, desperately, not to vomit after her little rollercoaster ride in the can.

Given that this girl is probably a youkai, it’d be a good idea not to bother her right now. Or well, it would have been if you had noticed that your grip was slipping on one of the trash bags you were holding. It clatters loudly to the ground. Of course, it had to make that much noise. In front of you, the small girl is instantly to her feet. Taking a fighting stance she looks around.

“Who’s there?!” The girl calls. She still seems a bit dazed from the roll in the can. “I know you’re there, show yourself!”

You curse inwardly. Of all the times to drop that damn bag. The girl in front of you seems to be unable to see you, despite all you’ve heard about cat’s excellent night vision. Too bad that she started sniffing the air about this time. Given that you’re holding two bags of trash couldn’t help you hide either. The girl launches forwards, running directly at you. Throwing your arms up you duck down waiting for the attack to come. It never does, but next to you, against the wall, you hear a dull thud as the girl hits it. It seems that she tripped on some of the trash that had fallen out of the bag you had dropped earlier. Well, that was certainly lucky. For you anyways. Not so much so for that girl who was now lying on the ground, rolling back and forth, and clutching her head.

“uuuuuuuuuu. . .” She looks like she’s about to cry. “YOU! THIS IS ALL YOUR FAULT!” She leaps at you, seeming to realize that you’re here again. You throw up your arms in defense and cry out, however, before the girl hits you, a bright flash of light occurs, causing the girl to stumble back in shock. She lands, with a thump, squarely on her bottom. She rubs furiously at her eyes, while you peek out from behind your arms, stunned.

“Huh?” The girl’s hands fly to her head, “My head doesn’t hurt any more! Wow! Thank you!” The young girl stands up and bows to you. Her nose twitches while she’s looking at you. Tilting her head to one side, she looks at you quizzically.

“You smell funny.” The girl states bluntly. “You smell like an outsider, but you smell like here too. You remind me of that funny guy.” She tilts her head to the other side.

As you’re about to say something, a golden fox bounds up to the young appearing cat girl.

“Ah! Ran-sama! I’m sorry. I got stuck in a can.” The cat girl hangs her head, depressed, while bowing to the fox. It almost looks like the fox shakes her head.

“AH! But Ran-sama, Ran-sama! This nice, funny smelling man let me out. He made my head feel better too! He’s nice.” The girl turns to you and smiles, before turning back to the fox, who’s now staring directly at you. Her eyes seem to pierce through you.

After a brief pause that feels like an eternity, it speaks. “I thank you for taking care of Chen, but do not think that it allows you to do as you please.” The fox turns back to Chen. “Come along, Chen, Mistress Yukari needs to talk to both of us.”

“M’kay, Ran-Sama~” The girl turns to you and waves before bounding off with the fox.

You sit there, leaning up against the building in shock. What the hell just happened here? Shaking your head you begin to gather up the trash that litters the ground. You lift the newly re-filled bag up, dump it into the can which Chen had knocked over, and then replace the lid on the newly filled can. You turn around in time to see Sakura walking out of the kitchen.

“Hm? I thought I heard a noise out here. . .” Sakura looks around before looking back at you, “I must have been hearing things. It’s best not to dally outside. Never know what you’re going to run into in this place.”

You shake your head and laugh inwardly before following Sakura inside. If only she knew what had just transpired here. After a brief bit of chatting with Sakura, you bid her good night and head up to your room. It seems that you were far more tired than you realized, collapsing onto the futon and passing out almost immediately.

Strange dreams assault you as you sleep. Tossing and turning, you awake in the morning to find that your sleep was not really all that restful. As you chase the specters of your dreams, trying to remember anything about them, you hear a knock at the door.

“Breakfast is in 10.” Sakura announces through the door before you hear her footsteps walking away.

Ten minutes, eh? Well, You suppose you could do something in that time.

[X] Go down to breakfast.

With your head full of thoughts of various breakfast foods you trek downstairs to the dining room. Most of the other people who are staying at the inn have already gathered here, however, that raven haired girl seems to be missing. You make a note to ask Sakura about it when you get a chance. Several people begin filing out of the kitchen carrying various foods. They set down what they’re carrying and disappear back into the kitchen before returning with more food. Soon the table is covered in a wide array of foods. Finding yourself an open spot at the table you sit down. After a short while the people from the kitchen stop bringing food and sit down them selves. Finally, once everyone’s seated, Sakura comes out of the kitchen and sits at the head of the table.

“Well? What are you waiting for? Dig in!” Sakura motions to the food before sitting down and helping herself.

Well, you don’t need to be told twice.

After breakfast has been eaten, and the dishes cleared and washed, people mostly scattered off to do whatever the various things they had planned for the day. A few stragglers, including yourself, continue to lounge around the table. You don’t really have any plans for the day. Looking around, Sakura seems to be nowhere in sight. You remember wanting to ask her about the raven haired girl from earlier. You could go find her now, or you could finally go take a bath. Maybe there’s something else you could do.

Is this copypasta? Because if not, it is now.

Fuck You.
雪華綺晶 !UdzMmUq0Oc 2008/09/04 (Thu) 20:59 No. 58419
Ugh. You feel disgusting after not having bathed in however many days it’d been since you’d gotten dropped here. You feel all slick and slimy. Thinking back to what Sakura told you when you arrived, there were several changes of clothes provided in your room. Dashing up there, you grab some extra clothing and head out to the bath house. It seems that it’s empty at this time of the morning. Ah, that’s nice. You’ll have some privacy.

After making sure you were thoroughly clean and had changed back into your normal clothing, you decide to head back up to your room and stow your clothing. As you walk through the main room of the inn, one of the other residents call out to you.

“Some strange woman with grey hair was here looking for you. She was wearing the cutest outfit too! I think I’ve seen it in one of those cafés before.” The guy looks somewhat dreamily off into space.

“She gave me this for you. She seemed really disgusted with the whole thing though.” The guy hands you a note and wanders off.

Opening the note it reads - ‘You are officially summoned by the Mistress. If you don’t show up, you’ll be made to show up.”

Looking around, as if the woman would appear again at any instant, you really hope that this is a bad joke. You have no idea who this mistress is, nor where she lives. Your best bet would be to ask someone from around here. Though you could always ignore it completely, there really isn’t any time frame listed on your requirement to appear.

>>58419
>“Some strange woman with grey hair was here looking for you. She was wearing the cutest outfit too! I think I’ve seen it in one of those cafés before.”

What if you puke on the managers? Would they let you go home then?
SettingsAppearance [X]