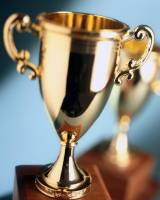 After reading some of the hilarious entries shown in this article (http://www.bostonherald.com/news/national/west/view.bg?articleid=1112881&srvc=rss) for an actual contest, I thought we could have one ourselves.

Sakuya grit her teeth at the sight of the blood leaking from torn genitals and glittering in the light, much like the contents of a torn sandbag might spill out and shimmer under the sun. While the mistress would no doubt be enthralled by the prospect of a sanguine affair, Sakuya could find no joy in using the incorrect end of the sparkling silver knife for her nightly fit of passion.
Anonymous  2008/08/14 (Thu) 10:13 No. 55721
Kourin (whose real name was Rinnosuke Morichika, but everyone called him Kourin (except for Marisa who called him Kourin-ze)) wore a trough in the floor of his curio shop pacing anxiously. Soon, the love of his half-life, Alice Margatroid, would arrive and he would have to tell her the truth he had been avoiding like a danmaku bullet. A smile crossed his meganekko face as he patted his full, round belly, incubating the new life they had created together.
Anonymous  2008/08/14 (Thu) 10:15 No. 55722
Just like that you are presented with a most troublesome dilemma; on the one hand you can buy this awesome fig and *hehehehe* 'hot-glue' it or you can save the money for stuff like food and that awesome Tsukihime remake that's coming out soon (you can finally get sacchin's route). You're torn between the two, and time isn't on your side. You gotta make a decision NOW.
Anonymous  2008/08/14 (Thu) 10:47 No. 55724
Flandre Scarlet who was Remilia Scarlets sister was one day blasting at her pluffies. She got a maid from her sister that said that witches and shrine maidens were attacking her place and asked her for help so she went. Flandre Scarlet opened her wings and said "its time for me to live up to my family name and face full life consequences" so she had to go.
Anonymous  2008/08/14 (Thu) 10:55 No. 55725
>>55722

Oh, shit.
Anonymous  2008/08/14 (Thu) 11:06 No. 55726
Marisa and Reimu kissing in passion. "Oh my Marisa," say Reimu, when suddenly wall fall down with a crash and Alice drive into room riding steamroller.
"Marisa what are you doing?!" Alice shout. "I have gotten you steamroller for present and find you kissing Reimu," Alice cry bitter tears.
Inquisitor !.FvYxWfkmU 2008/08/14 (Thu) 11:18 No. 55727
My name is Aya Shameimaru, and I have herpes. Like a collection of red dirt anthills, the infection shows across my face, the steady streams of pus and gore streaming from my sores like the cum flowing out of ZUN's fat dick, red and pulsating as it covers my face in pulsating, thick gobs of thick, salty goodness.

So, who gets the prize? Teruyo or Anonymous?
Gensokyo Man !!L3MGOyMGOz 2008/08/14 (Thu) 11:35 No. 55731
Hi my name is Tsubasa Kawaiiko i live in gensokyo i'm Reimu's cousin from another dimension but i crossed the border my name means Cute Little Wings because i have wings on my back they are dragon wings because i am also a dragon celestial and emo and lots of people make fun of me for that like Marisa. I dont like Marisa so i beat her up with my unbeatable spellcard shes also with Alice and theyre both having sex together which is ewww because theyre both girls. So now im headed to the scarlet devil mansion to ask Sakuya for a new knife because i accidentally broke my old one cutting myself because i was too strong and powerful for iron because I am a half-youkai.
Anonymous  2008/08/14 (Thu) 11:37 No. 55732
After spending another day o the mansion Remilia got bored and went to play with Sakuya, who was her maid and dog and toy, and called patchouli to play too, but she had to force Patchoulis because she never get off of the library. When they were playing Flandre got off her room and saw her sister playing with the dog-maid and the library girl (Her sister is Remilia in case you didn't notice, they even have the same family name [Scarlet, like red or vermilion] and were both vampire, because they were real sisters, not adopted sisters, and adoption sucks because someone is always the "real" daughter and the other is always the "fake" daughter) and went to play with them too, but they ran away because they were scared (because Flandre is the scariest) and locked Flandre on her room again and went back to playing. Flandre cried and got madded, and broke down off her room and killed everybody that's not remilia, and then they had lots of fun together for ever!
Anonymous  2008/08/14 (Thu) 11:37 No. 55733
>>55731

BACK TO WORK.
Anonymous  2008/08/14 (Thu) 11:40 No. 55734
"Oh god, how could this happen?" That is what Alice thought to herself as she sat upon the toilet, staring at the cardboard tube that had held the paper which she needed to wipe herself, but now was as empty as her own bowels now were after that beef and bean burrito platter she had for lunch caused her to rush to the bathroom and purge it from her system like a anorexic supermodel after eating a rice cake, but from the other end. Looking down in dismay she saw her panties shining white like an angel of salvation between her ankles, and it was then that she knew what she must do.
Anonymous  2008/08/14 (Thu) 11:43 No. 55736
>>55731

Where have I seen this before...it looks too familiar.

AND GET BACK TO WORK

Actually, that gives me more leisure time to play stalkan games without people telling me to update~

Waking up, it was a morning like any other for the gate guard of the Scarlet Devil Mansion, save for the fact that she now had a penis. She was first alerted to this new addition to her anatomy by the strange rise of her blanket, like a small circus tent had been erected over her neither regions, and pulling back the covers she now marveled at the colossal pillar that was her morning wood, standing proudly like a veiny totem pole. Exposed now to the air, her stiffened meat rod twitched and throbbed like a baby seal that had been clubbed in the head, and as the first rays of the dawn shone upon it, Meiling's massive muffin butterer seemed to quiver as if anticipating what was about to come.
Anonymaster !jZ462CU1sc 2008/08/15 (Fri) 02:22 No. 55808
As he moved rythmically with his wife, he couldn't help but think back to days when things were simpler, and when they actually had sex instead of playing Dance Dance Revolution.
Anonymous  2008/08/15 (Fri) 07:17 No. 55818
>>55801
You are a SICK SICK man.
Anonymous  2008/08/15 (Fri) 07:36 No. 55819
>>55818

Jesus fuck, what the fucking shit? Sukima is freeing himself from Teruyo's influence, that pic is old.

...Damn, this is tough. Comparing some of the worst stories.

I can honestly say, though, that LAE and BC/R have no good points, so they're equally horrible.

Yes, that thought was his last comfort, a final barrier between his mind and utter despair. His life was somewhat bearable until the fateful day when he realized the truth.

"I can't drive a fucking car without my legs."

first to five because it gets hard to count all the votes please keep this at the top.

Well, you know that saying "keep your firends close, keep your enemies even closer"?

Wait, it's not that one, it's "Know your enemies".
*Scorn* !!D4MGD0ZwZl 2008/08/19 (Tue) 05:05 No. 56171
The burning shame Alice felt was two fold, the indecent act of soiling herself in public was enough to bring a salty tear to her eye. But it was nothing compared to the shame she felt for the sexual thrill as fecal matter slowly crept down her leg in a warm trickle, fetid with the stench of waste and spreading a damp patch of brown across her once immaculate dress.

She wanted to die, it was so demeaning that she wanted to kill herself right now. And yet she couldn't help but shudder with immense pleasure as her muscles relaxed again despositing a squishy, warm turd into her panties.

For a while Alice sat there, unable to stop herself from wriggling her hips to smush the foul stuff into her skin, then finally she spoke up in a frail voice.

Hi my name is Ebony Dark’ness Dementia Raven Way and I have long ebony black hair (that’s how I got my name) with purple streaks and red tips that reaches my mid-back and icy blue eyes like limpid tears and a lot of people tell me I look like Amy Lee (AN: if u don’t know who she is get da hell out of here!). I’m not related to Gerard Way but I wish I was because he’s a major fucking hottie. I’m a vampire but my teeth are straight and white. I have pale white skin. I’m also a witch, and I live in a castle called Scarlet Devil Mansion in Gensokyo where I’m in the seventh year (I’m seventeen). I’m a goth (in case you couldn’t tell) and I wear mostly black. I love Hot Topic and I buy all my clothes from there. For example today I was wearing a black corset with matching lace around it and a black leather miniskirt, pink fishnets and black combat boots. I was wearing black lipstick, white foundation, black eyeliner and red eye shadow. I was walking outside SDM. It was snowing and raining so there was no sun, which I was very happy about. A lot of fairy preps stared at me. I put up my middle finger at them.

Write damnit, where are the updates?
SettingsAppearance [X]