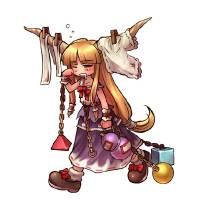 Oh~~~. . . Your head hurts. And that damn sun is too bright. Someone turn off the sun. You groan slightly as you turn over, trying to get away from the bright light. It’s on the other side too. Your head throbs as you push yourself up off the ground. Looking around the room, it looks quite thoroughly trashed. There’s dozens of scribbled pictures, cards, stacks upon stacks of board games, and a bunch of jenga sticks that are set up to look like the pantheon. Looking around, you don’t see any cans or bottles. In the corner of the room there’s a chalkboard with a circle with two lines coming out of it, and another circle with a smiley face. There’s a bunch of lines tallied on it, with there being one more under the smiley face side than on the circle with lines side.
You vaguely wonder why your head hurts so much, and what happened last night. The last things you remember is Suika all but throwing you in the bath after nearly ripping your clothes off. That earned her another whack from Reimu. You’d laugh if your head didn’t hurt so much. You remember Reimu serving rice and apologizing for it being all that she had, and you and Suika seeing who could eat it faster. . . Then she offered you a swig from her gourd, and then after that things get a little. . . fuzzy. You vaguely remember strip poker, and that the miko sucks at bluffing. Bandages. Who knew! Ugh. . . You really wish you could remember more of what happened last night, but it all just dances just beyond your ability to remember. However, a much more pressing concern comes to your attention.
You stumble out into the hallway, walk a short ways, and find yourself in a bathroom. Huh. How’d you remember where this was. No matter. Several minutes later you emerge from the bathroom feeling slightly better. Turning to your right, you’re treated to a hilarious sight. Suika’s walking down the hallway, Reimu’s bloomers and socks pinned up on her horns, apparently to dry. You snicker, only to be rewarded by a fresh throbbing in your head.

She continues down the hallway and into, what you presume anyways, is the kitchen.

I don't think now is the best time to seek out Reimu, for some reason.
Anonymous  2008/06/04 (Wed) 17:22 No. 40352
[X] Follow Suika.
Kirakishou !UdzMmUq0Oc 2008/06/04 (Wed) 17:26 No. 40353
Mmmnnnh. If Suika’s heading for the kitchen it’d be a good idea to follow her. Something to do for your hangover maybe. You slink down the hallway, one hand supporting yourself against the wall, the other hand holding your head.
You walk into the kitchen to see Suika face down on the grill over the fire, snoring lightly. Huh. You wonder absently if that hurts as you fill a glass with water and take a drink. WAIT! You almost drop your glass in your haste to get Suika off the grill. Her face is bright red with lines where her face was on the grill.

“Huh. . whuzaa?” She looks around confused for a moment before reaching up and touching her face. “Ah. . . Ow.” A dazed look crosses her face. “Huh. . . I did’t gain. . ah ‘ell. l’st R’mu’s clothes nn’t burn iis time.” She giggles. “Mnnnn. . .” Suika streches languidly. “St’ll t’rd.” She takes a swig from her gourd. “Ah. Much better!” Seeming totally revitalized, Suika stretches again, brushing against Reimu’s clothes. “AH! I need to get these to Reimu!” Suika carefully removes the clothing from her horns and folds them on the table in the middle of the room. She looks up and seems to realize that you’re here for the first time. “Ah! Hey. Can you throw a pot with some water over the fire? I’ve gotta take Reimu her clothes or she’ll be pissed at me.”

>>spyware from the housemate's games

Communal computers are a terrible idea.
Kirakishou !UdzMmUq0Oc 2008/06/04 (Wed) 19:30 No. 40404
Suika runs out of the room before you can scarcely do more than nod your head. Turning back to the grill and the counter, you look around. There doesn’t seem to be a pot here. Several minutes of searching later, you finally find the pot, outside. On top of a chicken to boot. As you’re about to head inside again, you hear a familiar voice.
“OI~ REIMU, YOU HERE ~ZE?” Someone shouts from above. Looking up, you see it’s that Black and White witch from before. You really wish she’d quiet down, your head still hurts.

Marisa -technically- sent us to the Shrine. Also, if she says she didn't steal our money, that's the thief's word against the victim's. Thusly, we get away with it.
Anonymous  2008/06/04 (Wed) 20:17 No. 40421
Who in their right mind would ever believe Marisa if she said she didn't steal something?

She's not only well-known as a thief, but also known for denying she stole anything.
The only possible way some doubt could arise is if we were asked specifically what she stole, and a search doesn't turn up anything like that.

“HEY! YOU!” You shout at Maria who summarily ignores you and proceeds into the building

“Oi~ REIMU! WHERE ARE YOU ~ZE!” She’s gone inside the side building. Well, you’ll not have this! You’re going to yell at her come hell or high water. You storm around to the door where Marisa went in and peek around the edge. Marisa’s standing in the middle of the room looking around at the mess before sighing.
“Oi. No fair having a party and not inviting me ~ze.” Marisa mutters to herself while slumping her shoulders forward. She straightens up and shouts for Reimu again.

“SUIKA~ YOU HERE ~ZE?” Marisa plods out into the hallway while calling for Suika now. “IT’S NOT GOOD TO SLEEP THIS LATE IN THE DAY WHEN YOU HAVE A VISITOR! OI! WAKE UP!”

Marisa trundles down the hallway a ways, opening every door she comes across and shouting inside for Reimu and Suika. You follow along, at a safe distance, wondering if she’s going to go through the ENTIRETY of the building this way. After about seven or eight doors, Marisa comes to a door, opens it, and is about to shout when she freezes. You feel a weight on your back and look up to see Suika looking around the corner with you.

“What’re we lookin at?” Suika looks down the direction you were looking. You shush her, and point at the frozen Marisa.

A piercing scream echoes through the building and the nearby area. You and Suika fall backwards into the room you were peeping down the hallway from.

“Y-YOU!” There’s sudden loud thud againsty the wall. Several pictures and items on shelves on the wall in the room you’re in fall to the floor as the whole wall shakes. You stare at the stuff that fell, wondering what happened.

“ACK!” The footsteps running up the hallway breaks you out of your reverie as you see Marisa running past, A half dressed Reimu running along behind her throwing spell tags and persuasion needles. Suika starts to giggle, but you clamp your hand firmly over her mouth. You REALLY don’t need Reimu coming after the two of you, given how upset she seems to be. Suika pries your hand off and starts laughing in earnest.

“Hoo. It’s like this ever other morning. Marisa is so impatient” Suika continues laughing while you’re desperately trying to catch her attention.

“Oh, so my displeasure is funny to you, Oni?” Reimu is suddenly looming behind Suika who freezes. Slowly turning to face Reimu, Suika’s face is a mask of shock and surprise.

“And just what do you think YOU’RE looking at?!” Obviously still upset, Reimu glares at you.

“Uh. . . I just was looking for the pot.” You hold it up. “Oh look! There it is! I need to get back to the kitchen! Excuse me!” You bolt from the room leaving the fuming Reimu behind.

You sigh inwardly as you finally get the pot over the fire, which you had to re-start after the little ruckus and distractions that happened earlier. No sooner do you have the water boiling than Suika walks in carrying a giant bag of rice.

“Sweet! You got away from Reimu too? Sorry I didn’t grab you earlier, I was in a hurry. Sorry.”

“EH?! You’re gonna forgive me THAT easily?! You’re supposed to make me beg and plead to you for forgiveness! This means you’re not awesome!” Suika sighs and slumps her shoulders. “Oh well. Well, let’s start the rice.” Suika drags herself over to the pot and dumps the whole bag of rice in. A bit of water spills over the edge and onto the fire, which you quickly tend to. When you look up from the fire, Suika’s gone. Damn.

The rice is quite quickly cooked, and you drain the water off from the pot. After putting the rice into a large bowl with a lid, you move the bowl to the table. There’s already settings for 5 people, but nobody seems to know that breakfast is ready.

You snooze you lose, girls.

>>40795
I think it's more complex with Suika right now. We won the challenges last night by a single point, so perhaps to her we're seen on a different kind of level to the one we think we're on?
Anonymous  2008/06/07 (Sat) 10:47 No. 40828
>>40803
ZUN's oni value strength in character. All of Suika's dialogues in IaMP during her scenario seem to characterize that trait as Suika (even if playfully) criticizes her challengers. It's probably just heckling, but, still, oni can't tell lies. We can only assume everything they say is really how they (think they) feel.

And I'm incredibly suspicious about her comment about Yukari's "very existence" being "fraudulent."
Anonymous  2008/06/07 (Sat) 11:42 No. 40857
Next time we meet up with Suika, we should make up for disappointing her for not making her beg by telling her that a man should never make a lady beg for forgiveness and then ruffle her hair.