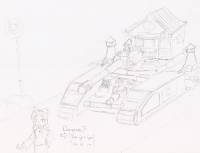 It is the 41st millennium. For more than a hundred centuries the Emperor has sat immobile on the Golden Throne of Earth. He is the master of mankind by the will of the gods, and master of a million worlds by the might of his inexhaustible armies. He is a rotting carcass writhing invisibly with power from the Dark Age of Technology. He is the Carrion Lord of the Imperium for whom a thousand souls are sacrificed every day, so that he may never truly die.

Yet even in his deathless state, the Emperor continues his eternal vigilance. Mighty battlefleets cross the daemon-infested miasma of the warp, the only route between distant stars, their way lit by the Astronomican, the psychic manifestation of the Emperor's will. Vast armies give battle in his name on uncoutned worlds. Greatest amongst his soldiers are the Adeptus Astartes, the Space Marines, bio-engineered super-warriors. Their comrades in arms are legion: the Imperial Guard and counteless planetary defense forces, the ever-vigilant Inquisition and the tech-priests of the Adeptus Mechanicus to name only a few. But for all their multitudes, they are barely enoguh to hold off the ever-present threat from aliens, heretics, mutants - and worse.

To be a man in such times is to be one amongst untold billions. It is to live in the cruellest and most bloody regime imaginable. These are the tales of those times. Forget the promise of progress and understanding, for in the grim dark future there is only war. There is no peace amongst the stars, only an eternity of carnage and slaughter, and the laughter of thirsting gods...

'It is the folly of men to believe that they are great players on the stage of history, that their actions might affect the grand procession that is the passage of time. It is an insulating conceit a powerful man might clasp tight to his bosom that he might sleep away the night, safe in the knowledge that, but for his presence, the world would not turn, the mountains would crumble and the seas dry up. But in the remembrance of history has taught us anything, it is that, in time, all things wll pass. Unnumbered civilisations before ours are naught but dust and bones, and the greatest heroes of their age are forgotten legends. No man lives forever and even as memory fades, so too will any remembrance of him.

'It is a universal truth and an unavoidable law that cannot be denied, despite the protestations of the vain, the arrogant and the tyrannical.

"Admiral!" An officer shouted, "We've received damage from the starboard side, it appears to be a torpedo!" Admiral Provost stood at the bridge of the Colony Ship 23110, watching helplessly as his escort was destroyed. "Battle Cruiser Rightious Fury has taken critical damage! They're abandoning ship!"

"Sir, the captain of the Emperor's Blessing is requesting assistance!" Another officer shouts, and the ship shudders again.

"Admiral, sealing bays 13-22, the civilians are being relocated to the ship's center holds!"

"Admiral, the Eagle's Wrath is being boarded! Sir, our escort fleet has been overrun!" The officer, a young woman turned towards the admiral. "Admiral!"

Admiral Provost stared aimlessly at the battle raging beyond them. Several ships, filled with Chaos Space Marines from the Red Corsairs themselves, had ambushed them as they had begun the preparations for a third warp jump. How could he had made such a horrible mistake? This area was the perfect ambush spot, with several moons and Asteroids. How, when they had been low on fuel, there was conveniently an outpost offering free fuel to the ships of the Imperium.

Provost was a harded veteran of space warfare, having battled pirates, orks, and even the forces of Chaos. And just after his retirement, he had failed.

These civilians, they had placed their trust in the God-Emperor to provide them safe transport to a new home, a new life. And he had failed them.

Provost stood up from his commander's seat, looking at his crew. "All unnecessary crew, personal, and all civilians, abandon ship." Several officers looked up in shock.

"Take as many of the loading ships as you can, fill them with civilians, and set up a warp jump for them. It's risky, but if we make it short and random, we can do it quickly enough and with enough speed to ensure the survival of at least some of the civilians." Provost turned to the Communications officer. "Nav, order the gun crews to open fire on the one attempting to board the Eagle's Wrath. We'll fight to protect the civilians as long as we can before we die."

"Shiv! Get those shields to full strength, don't allow any more shots to get through!"

Provost looked at his crew. Loyal members, all, even at a time like this when mutiny would be rampant. Faithful to the Emperor. Admiral Provost had never needed to keep a priest on the deck of his ship like other admirals; he was one of those few that inspired through attitude and action, not through fear.

"We've filled up as many ships as possible with civilians! Escape craft also filled! Sir, all we need is for you to board your personal ship!" Provost looked at the officer who said that, and laughed. "Sir?"

"Don't you know?" He asked. "A true Admiral stays with his ship to the bitter end, a tribute to the Emperor's sacrifice." The admiral looked up towards the stars, towards the Chaos ships bearing down on them.

Because so far it looks like something pooshlmer would come up with.

I don't see anything wrong with giving this a chance, you guys gave all the other stories changes and they all seem to have gone pretty well.

Come to think of it, I think some people DID complain when I made my D&D recruitment thread. I just didn't really notice. (Still kinda open for one, maybe two more, by the by.) In any case, it's funny to see additional abuse heaped upon this, considering how long Touhou has also been a part of /tg/.

Downloading Dark Heresy books now. Is the Inquisitor's Handbook the main rulebook? I notice they're both about 200mb.