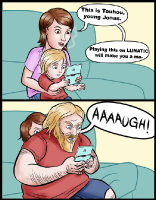 Now we're pushing it, a new one started up in /sdm/ and we've just had a full day of three active threads in /th/.

Give it time, there's pretty much something on every night now. If anything else dies soon then move in.

If you insist on writing because you are stubborn\awesome go write in one of the unclaimed regional boards.

I don't like following about seven different text visual novels.
Though, I'm all for a dedicated school days in Gensokyo.

As stated before, please do it one of the unloved sections.

The people that hated GSQ were either grammar nazis that couldn't shut up or butthurt virgins annoyed that the GSQ anon was getting more action than they were.
Whenever you ask why anyone didn't like it they just say "OMG GRAMMAR SUCKS".

The damn archive never loads for me. Anyone else have this problem?
...or we could do this Anonymous  2008/04/24 (Thu) 12:35 No. 24287
This kind of life is rough. Ever since that time you became her personal bitch things have sucked. Carry this, do that blah blah blah. But now it has gotten worse. She would get you excited, give you a bit pleasure, and then leave you with blue balls. Today was not going to be different, or so you thought.
You are chained to a wall, and Tewi is sitting in your lap. She is gripping your man meat hard, moving her slender, soft fingers up and down on your shaft, painfully slowly. You can see it from the look on her face, she is enjoying torturing you.
"Well my little slave, how does it feel" She picks up the pace, and just when the pleasure is starting to feel really good, slows down, and hops off of your lap.
You can't take it anymore.
You break free from the chains with ease, and tackle her to the ground. Tewi seems a bit surprised at this.
"Oi, human, what are you doing"?
You pin her down, and spread her legs. She seems a bit scared at you now, but it just gets you harder.
"He-hey human, what are you-"
But she never has a chance to finish what she was saying. You push your erect penis against her panties, which are a bit soaked from her own juices. She must have gotten really excited while torturing you.
"Hyanngh-"
She has tensed up, as you rub yourself against her little rabbit hole. Soon her resisting is becoming weaker, as she is loosing her ability to think straight. She seems confused. There are tears in her eyes, and she looks at you with fear, but at the same time her body language suggests that she is ready.
"Ple-, Please-"This snaps you back to reality, as her voice sounds like she is about to cry. you are about to let her go, until
"d- don't's..stop"
You look at her face. She seems to be avoiding your gaze, and you let her go. She removes her panties, and lays down infront of you. Before you have any time to act, she thrusts herself at you, burying you Pen0r in her vag00. The feeling, you can't describe it. It feels like you own penis is creating a new path for itself into something warm, soft and wet.
You know what to do. Slowly, as gently as you can, you start the thrusting movement. You soon pick up the pace, creating wet sounds of flesh hitting flesh. She arches her back, trying to grip the floor in ecstasy with her hands.
You lift her up, on top of yourself, and she places her hands on your shoulders. you presume the motion of the art of loving, and she grips your shoulders so hard, that her nails draw blood. her body starts to convulse, and she lets out the loudest cry of ecstasy you have ever hear.
But it's not the sound that shocks you, it's the feeling. Your dick, deep inside Tewi, feels like it is being massaged from everywhere. It feels like Tewis milking you, urging you to shoot out your load. And that my friend is what you do.
You feel your penis filling her shot after shot with your own juice.
Tewi is resting against your chest, with your dick still inside her. Jizz and her own juices are dripping down along her tights, dropping or your lap. She presses her small body so close to you as she can, hugging you tightly.
Anonymous  2008/04/24 (Thu) 12:48 No. 24301
Please don't do that.
YandereAliceFag !nmVOHsTRd. 2008/04/24 (Thu) 12:50 No. 24305 ▼
Image Source
File 120906660528.jpg - (141.81KB, 400x550 , 1209065271935.jpg)

>>24301
... is there something wrong with you? How can you NOT like that?
Anonymous  2008/04/24 (Thu) 13:01 No. 24317
>>24305
It's because I twitch when I see the last word of a sentence followed by NOTHING NOTHING NOTHING ABSOLUTELY NOTHING AT ALL followed by an ending quotation mark.
I'm not kidding. I actually twitch. The whole bottom right side of my face sort of jerks, a bit to the right, and then returns to its normal position. That's a twitch, I think.
SettingsAppearance [X]