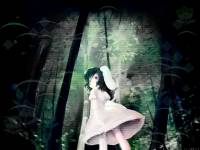 You try the door and are quite surprised to find the door unlocked. You slip in side and close the door behind you quietly. Tewi is standing there, digging through a box. You seem to be in a guard station of some variety. Looking around you see your possessions on a nearby table. You quickly rush over and gather them up. You check the box. It doesn’t seem to have been opened. At least, you hope it hasn’t. You sigh in relief. You go to put the button back on when Tewi is suddenly beside you and stops you.
“Not yet. C’mon. I got what I needed from here. Hurry. We probably don’t have much time to get out of here.”
You finish loading your stuff up, and adjusting Eirin on your back, you charge out after Tewi.

You and Tewi are running furiously. You probably have half of the tengu on the mountain after you at this moment, the only thing keeping them from descending upon you at this very moment is the fact that they have absolutely no idea where you are. Tewi skids to a stop and you follow suit, almost flying off the cliff that caused Tewi to stop.
“Well, it would seem that we have arrived at an impasse.” Tewi looks down, as do you. It’s far too far to jump from here, and it’s too far for you to be able to climb easily, especially with Eirin in the state she’s currently in. Somewhere behind you a tengu shouts. Damn it. It seems that you’ve been found out. Well, there’s no choice left you just have to . . .
“C’mon!” Tewi’s waving at you as she starts to climb some stairs that are carved into the side of the stone face behind the waterfall. You quickly follow suit, trying to not slip on the water covered stone steps. You somehow make it to the top of the stairs which lead out to a path along side the waterfall. Tewi quickly vanishes up ahead of you. The path heads both up and down the hillside. You glance down and think you see someone at the bottom of the path. You can’t really be sure from this distance, and really, you don’t have the time to bother. You quickly follow up the path behind Tewi. After a short while the path levels off and you find yourself near the top of the falls. Tewi is nowhere to be seen, and you’re not quite sure where you’re at. There’s some foliage nearby that seems to lead off towards the forest, There’s a small rope bridge over the river just before it becomes the water fall, and the path continues off past the foliage.

Pro: In the open, we can't be surprised so easily.

Con: In the open, no where to hide

Pros: Enemies can only come one at a time, if they aren't on th other side we're safe and could even cut the bridge

Cons: They could cut the bridge with us on it, it's in the open again and that's no good against people who can fly.

Have at you!
Kirakishou !UdzMmUq0Oc 2008/04/23 (Wed) 13:02 No. 23783
Into the foliage you go, almost tripping over Tewi when you do. She quickly pulls you down and out of sight. Just in time, as several tengu fly up out of the waterfall, and start looking around. Tewi pulls you back through the foliage heading towards the woods quietly. The two of you manage to slip away unnoticed, thankfully.

You and Tewi stop to rest. You’ve been moving non-stop since you’ve left the tengu’s prison and it’s catching up to the two of you. You carefully put Eirin down. She’s still out like a light. Whatever they did to her, it was apparently quite severe. Tewi slumps to the ground followed shortly by you. The three of you just sit there in the middle of the woods, quite exhausted. Hopefully, the tengu are still out searching around various places besides here. The forest is quite thick here, so someone could probably pass right past you with out even seeing you.

I ask QUIETLY. Maybe snuggling close enough to whisper into her ear. Mmmm.

We stab her with the stick+blade.

If she knew enough to find where we were imprisoned, I would suspect she might know where we are now.

Other than that, nothing else we can do other than rest while we can.

So we double jump everywhere screaming 'NEED A DISPENSER HERE' over and over while bonking any tengu with our sharp-stick?

Fucking niggers ruining my music with their (c)rap.

We fucked up at Eientei, and got Reisen and Tewi in our party. We fucked up with Hina, and got KISSU KISSU FALL IN RABU with the moon bunny.
And now with our latest fuck-up, we wind up rescuing Eirin from imprisonment and torture.

>>Tewi would have seen us, and shes buddies with Reisen.

It'd have to be Gensokyo's equivalent.

Yeah, that's kinda what I had in mind.

Then later, when we're surrounded -

I think that Alice is Luke

>Han Solo/Anon is "a loner who realizes the importance of being part of a group and helping for the common good."
and

>has a wry wit, skepticism, a reckless disposition, and technological savvy"

Theoretical probability means nothing to anonymous.
Anonymous  2008/04/23 (Wed) 18:50 No. 23960
I find it worrisome that Tewi didn't want us donning the communicator. I'm not sure if the Tengu could have monitored its signal (no demonstration of the zenith of Tengu mimickry of human technology has been demonstrated yet) but to even be asked not to put it on our ear ...

Good old FF3...
Anonymous  2008/04/23 (Wed) 19:04 No. 23966
>>I find it worrisome that Tewi didn't want us donning the communicator. I'm not sure if the Tengu could have monitored its signal (no demonstration of the zenith of Tengu mimickry of human technology has been demonstrated yet) but to even be asked not to put it on our ear ...

Well, it's possible there are some good reasons for her wanting us to be incommunicado for a little while. Perhaps knowing we still have poor control over our own communication using it, there might be something about it that could give away our position. It could be that Reisen is still in bad shape, and shouldn't be disturbed while still recovering.

It's just that between his little traps and our own suicidal retardation, we'll need a goddamn miracle to make it happen.

It's the only way to bring balance back to The Fo...I mean, Gensokyo.
Anonymous  2008/04/23 (Wed) 21:51 No. 24018
>>24012
Not really, if that's what happens when things go WELL for us in Gensokyo.
The Reimu situation is diffused peacefully, we're on good terms with everyone again, Eientei gave their blessing for our relationship with Reisen, and JUST when we're finally about to consummate our love...BAM.

What would make Anon despair more? Being trapped in Gensokyo in a bad situation with no way out but slow painful death? Or having every reason to want to stay, but being denied that happiness to be forced back into a life of misery and loneliness on the outside?

Go forth Ewoks! Destroy the traitor with yourHHHHHHHHHNNNNNNNNNNGGGGGGGGGGGGG
Anonymous  2008/04/23 (Wed) 22:58 No. 24038
>>23996>>24018>>24020
I'm starting to feel like I should treat this like an anime that's probably going to have a shit ending (like when Claymore was about to catch up to the manga) and stop watching until I see how much RAGE it generates.

I mean, fuck, what's the point of making all these choices if they all lead to a disappointing BAD END? Would you play a VN like Yume Miru Kusuri if the good ends were taken out?
Anonymous  2008/04/23 (Wed) 23:11 No. 24043
>>24038
Yeah, I have to admit that as fun as jerking Anon around and making the poor bastard suffer can be, in the end it all seems kind of meaningless if it wasn't FOR something.

It's one thing if the story has no element of choice whatsoever, such as in something like Narcissu, for example. But when you make it more game-like, then it's only fair to try to give the "player" at least some semblance of a fighting chance. Otherwise, it's little different than those boss battles in games where it is completely impossible to truly "win" the fight no matter what you do because the story demands you lose like a little bitch no matter how much ass you seemed to be kicking.
Anonymous  2008/04/23 (Wed) 23:15 No. 24045
>>24043

Although, some of the better-designed games will give you an awesome easter egg bonus if you're a bad enough dude to actually beat the unbeatable boss battle.

...Maybe this is a really accurate analogy.
Anonymous  2008/04/23 (Wed) 23:54 No. 24058
>>24045
I think it could all be a matter of what your perspective on "Good" is.
Maybe we can never go back to Gensokyo, but can still maintain contact with our moon bunny via Codec and the NEET's internet connection. Maybe we can stay inside the barrier, but for whatever reason we hit a Chobits scenario where we get the girl but for whatever reason can never have sex or something.

Or maybe we all have a seemingly perfectly happy ending with everyone, but only to have it revealed that we're all just brains in jars inside Eirin's lab.

Yeah, I agree. If it turns out that it was all pointless, I'll be angry. And mad.
SettingsAppearance [X]