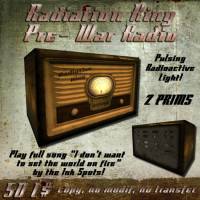 For all you faithful watchers in HV-Land, airing of Fallout Gensokyo will resume momentarily.
Thread archive: https://is.gd/b1mci
Last thread: https://is.gd/MZFf7J

“This is your DJ, Momizi X, and you're listening to Taking It Easy with Momizi: Talk, news, and free-format musical stylings on WGNR Gensokyo News Radio. It's time once again to get very, very personal with one of our lovely listeners. Delivered this morning by crow-mail from the rabbits at the community clinic in The Village:
“'Dear Momizi X, long time listener, first time writer. We always tune to your station at my workplace. Your news is fresher and usually less biased than some other local sources, and we find your music makes for good background sound when pulling impacted wisdom teeth without the aid of anesthetic. However, sometimes the screamers get so loud that I'd wish you'd update your playlist with something that really rocks. Like Queen. Signed, Elena Dark & Tall, Maxillofacial Surgeon.'
“Well Elena, while we have been moving in a slightly more modern direction lately with KVV⑤—and WSDM with better access to some older stock—the explanation here is actually more complicated than the eclectic musical tastes of your tengu disc jockey. When the bombs hit at the start of the Great War in 2078, about 10 billion people were wiped off the planet. A few survived in the Vaults and went on to repopulate the Wastes afterward, but the combination of violent competition for a dwindling pool of resources and the general prevalence of subsistence living left little room for musical eccentricity in the Wasteland, while inside the Vaults tightly-controlled media indoctrination stifled the creative spark of entire generations.
“But there's an important second point that might have escaped you: Every bomb that exploded produced an electromagnetic pulse capable of wiping clean all digital media. You might be familiar with smaller imitations, those pulse grenades used to disable amok dolls and their puppet-frames? I've heard told that either side in the War specifically engineered high-altitude bombs that produced these effects solely, blanketing the greater Earth sphere in static. As a result, 8-track, DAT, cassette and almost all other portable digital media were destroyed. What's left behind is tape & disc holography—which was too expensive at the time of the War for mass distribution—and physically-wrought media like vinyl record and wax cylinder, hell, we even break out the Edison Diamond Disc from time to time. But because of the age of the media, wear from use, and rarity, I don't get to play everything I want, as much as I want, Freddy Mercury included.
“In theory, Vault ③, built under the Layla Prismriver Museum of Sound, was supposed to catalog and preserve all kinds of music for the post-War generation. However, even in the rare event anyone can find the damn place—amidst the mists and coldest frosts, to borrow a phrase—there's tales of ghosts that stoically bar any entry. Assuming of course that's not horseshit made-up by former residents or conservation-conscious Wasteland explorers trying to deter further looting.
“Because of this we can't accommodate requests right now, but I'll still dedicate this wobbly platter to you, Elena. Just don't spare the Novocaine on my next cleaning.”

Has there ever been a story that restarted after 6 years of hiatus? Might be a record. Of course the story can only continue if there are readers for it.

As for what happened to the author that necessitated such a long interim, see >>14198 in /gensokyo/. In 2 weeks I have surgery to make my right hand functional by transferring a functional wrist tendon to my right thumb, which may make writing easier.

I'll post the rest of what I have, but I need IRC to have someone proofread, and I'm not sure how to do that. At the very least, this should prove the above trip is indeed the Fallout writefag.

Anonymous  2016/05/13 (Fri) 23:36 No. 188131 ▼
Delete Post
Report Post
Never read the original, since I'd hate reading what is considered a good story with an abrupt conclusion, but if its continuing I'll certainly join after I've gone through the older threads/

I hope the past years haven't treated you too badly.

Knock yourselves out. I'm biased, but I still consider this the best story in the site. At the very least, it was the reason I started playing fallout. (as a result I was a bit disappointed that the vault 101 section of the game lasted so little)

Fixing that link. You gotta put in the board name.

Welcome back, you wonderfully imaginative fuck. I love you so much.

I am both thrilled and humbled by your return after what you've been through, and feel legitimately honored that you decided to return to us.

Thank you so much. I look forward to more wonderful tales from your genius.

(As for your quandary: You don't know how to IRC, or how to request a proofreader? You can use the IRC widget on the site's main page until you get a real IRC client, and getting a reader is as simple as going "Yo, anyone available to proofread?")

Fallguy, I'm sorry to hear about all you've been through. That said, I REALLY hope to see you continue this thing.

Thanks. The music in the old links are broken. Dynamic DNS servers no longer support free services, so future music will be youtube links.

That plus a lot of magical manipulation of electronics to make up for the late introduction of the transistor.

>>188146
>Fallout-anon, I don't know how closely you're monitoring this thread, but if you see this could you say whether or not you've found a proofreader yet?

I'm still editing for content, but if you want to send me your email via my email, I can send you the update when I'm done. Might be a few days--trying to pare it down so there is more frequent voting.

To everyone: I'm so fucking happy to have such a positive response. Pic related. I'm especially grateful to any new readers will to check out the story.

The Pip-Fairy, if you play your cards right, could have a body soon.

>>188193
>Do you plan on also having some of the newer characters that have appeared in the 6 years of this hiatus have roles in the story/history?

If they don't have a place yet in FG, they will. Every Vault (and there are at least 13) has/had an Overseer, a ZAX supercomputer, a shrine maiden, and maybe a chief scientist. So yeah there's lots of room. Can't promise they'll be alive.

Well that's unfortunate. How about the above?

My objective, as of his 4th level gained, was to intense training his CHA to 10 and then use Mutate! Or, preferably, a house ruled perk not unlike Maribel's, to change his magic related stat from INT to CHA.
This will, not only improve his spellcasting prowess, but also, in conjunction with the charisma bobble head (no doubt a SDM-related reward, maybe for clearing out the Kirisame war memorial?) allow him to gain more than 100 points on the Magic skill.

On an unrelated note, that last sentence longs for death, holy fuck.

There are several things to consider though:

1-Does the charisma bobble head bonus count as a 'Natural stat' for the meta human trait?

2- A feat like Maribel's is preferable because the bonus affects both Magic and Danmaku, something we sorely lack skills points on, but... Maribel had a mentor. Will we need one as well?

3- Does Mutate! Really work as an alternative?

4- Will this allow us to become the second person in Gensokyo to be able to fly unaided? Or we should specialize in Air magic for that?

5- Does bobble head bonuses stick with you even if you don't keep the figure?

This is a long term goal. It will be some time before we are ready to take on an Oni, let alone a few of them. And maybe the Charisma bobble head is somewhere else. And maybe the owner doesn't feel like parting with it... There are a lot of 'maybes'

But as far as goals go, I like it very much.

Rereading this, I find it interesting how even the Afterlife's courts have been Americanized.

Makes me wonder what changes were in effect there. Like what would the differences of Eiki's court, pre-American & post-American, be?

Also I think you might find this link useful for pictures or ideas: https://www.reddit.com/r/RetroFuturism

I kind of want to pick Mary because she can't be trusted to not get us into inadvertant contracts (seriously how the hell was Aya able to convinve her to do that?) but Renko is good for computer and techy stuff so she might be a better fit.

Or perhaps we have Aya come with us but frankly I don't really know what she's useful for. At least that would allow Ren to keep an eye on Mary.

Oh I think Novogrod also wants a new body as well or something from Alice.

I think your thread archive link in the OP is broken, Fallout Anon.

I would include a picture of your favorite 2hus, but if you ever mentioned who they were, it's slipped my mind. So instead, have girls remembering priority #1 in a stiff breeze.

FalloutBrother  2018/08/26 (Sun) 20:26 No. 199243 ▼
Delete Post
Report Post
My name is Mark, the author was my brother Michael who passed away in June of 2016. I inherited his hard drives and just got the balls to plug them in this morning since his passing. While thumbing through the contents of one of the drives I found one titled "Fallout Gensokyo" that was filled with text documents and images, and after some research lead me to this page.

I'm not too sure what to say. I didn't know about this project my brother had going on, let alone the positive response to it. Just wanted to reach out to those wondering.

I wasn't around for back when this story was still going strong, but it's saddening to hear this. Hopefully he rests well now, for he's in the good company of those the site has left at the wayside.

So basically Kira, more or less. Can't think of anyone else.

That said, I must thank you regardless of myself not being a reader. Closure to a story's abrupt end is a rare commodity on this site, and it's something we so often never see.

I loved this story, and I think I speak for all of us when I say your brother will be sorely missed.