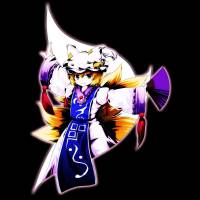 "Evening, Yukari." Reimu Hakurei waved lazily to the distortion just behind her shoulder.

"Not quite." The voice was decidedly not Yukari?s.

"Ran Yakumo, yes." Ran spoke her surname with no small amount of pride.

"The Imperishable Night Incident, yes. You've grown since then."

"I guess I have." Reimu paused. "Why are you here? Normally, Yukari would stop in to tease me a bit and leave the next morning."

"I've been sent on business. Yukari wants the Border reinforced, so I thought I'd ask you to help."

"Can't she get up and do it herself? The border has been better than usual lately." Reimu was used to day-to-day inconveniences like this.

"Yukari is doing it herself. She wants it done within three days, so you need to help me with the eastern half."

"Why the hell does she need it finished so soon?"

"Remember the earthquake last week? Yukari is convinced it was a ripple."

"Ripple? Is that supposed to mean something?"

Ran stared at Reimu for a long moment. "Do you want me to launch into an explanation? I suspect you don't really care."

"Ew, no. I hate it when Yukari tries to talk about Border stuff."

"A metaphor, then. Think of Gensokyo and the other border worlds, the Lunar Capitol and Makai among them, as ships at port. The Outside world is the island we make port at in this case."

"The ocean is what separates us from the other islands. What we've recently had happen is essentially a decent sized wave, followed by the tide rushing out all at once. The border feels at its strongest without regular waves hammering away at it, as you've said. That's a good sign that there's a tsunami, a really big wave, on the horizon."

"Is this a natural thing or is someone doing this?"

"Yukari didn't say. Whatever the case, if we weather this, we're going to have a lot of extra-dimensional debris that rides in."

"Ah geez. Better get to work then. We're burning daylight."

They would be finished with the reinforcement in three days? time.

The wave came in two.

There are times when I have to ask myself where I went wrong. Unexpected atmospheric reentry is not the best time to be having one of those moments.

Okay, don't panic. I'm a professional. The sirens and flashing warning lights are a distraction. Aw crap, that was an explosion.

Shut the hell up computer, I know. Flip with the back boosters and nearly get pasted by the remaining chunk of the ship. Left, down, left, metal on metal as I scrape the forward guns, and CLEAR!

Still falling at terminal velocity, need to slow down. The shift in G-forces when I fire all my boosters is enough to cause a normal person to black out. Since I'm made of stronger stuff than that, I only pass out when I smash into the ground.

Ugh. Still with the incessant beeping. Override that shit.

The adrenaline rush and my training have already made my brush with death into an exciting memory. Still, I'm going to feel like shit when the rush works itself out of my system.

Okay, first of all, systems check. Right arm is completely gone, probably from the ammo cooking. Targeting array is smashed, meaning I'll have to manual aim if I get into a fight. Left and foot boosters still work, but they're overheated. Legs are serviceable, though I can't say I want to strain them too much. Left side is fine, hull integrity is at 35%, and the generator is miraculously unharmed.

My radio doesn't work, whether from damage to me and the ship or atmospheric interference.

I'm in a small crater that might have been a field before I landed. Disloging myself in a shower of dirt, I take in my surroundings. Off in the distance is an enormous plume of dirt and smoke, no doubt where the ship crashed. Behind me is a large mountain, some manner of settlement near the base. A river flows down the mountain, past me to a distant lake. Looking up, the sky is alien, a dark purple shot through with streaks of gold. I can't see any moons or stars.

Looks like I'm stranded on an inhabited, unfamiliar world, with no support and a heavily damaged mech. I always hated survival simulations, too. At least the air is breathable enough to keep my filtration systems from panicking.

Oh hey, I think that's a local. With her wheat colored hair, earth-toned clothes, and lack of shoes, I presume her to be a farmer. Judging from the coating of dirt and her irate expression, I very nearly landed on her. At least she seems to be a human, rather than one of the more hungry races.

I turn on my speakers, having previously shut them off with the warning sirens.

"Oh, so you can talk, steel-for-brains. You've cratered my field and destroyed my livelihood and you had better fix this shit!"

Is she for real? Seriously? ?Look lady. I just made a safe landing from orbit, with half of my boosters and uneven weight distribution. I could easily have been shrapnel scattered across ten kilometers. I made the best damn landing possible to make in this state and it was so awesome that another time, I'd get an official commendation for it.

Right now, I'm on an unfamiliar planet and my ship has crashed a long, long way off. My mech is just about falling apart and I'm achey and hungry and I do not give a single solitary fuck about your field."

I take a few deep breaths. Damn it felt good to get that out.

The woman's expression wavers between impressed and livid. "You are without a doubt, the [i]strangest outsider I've ever encountered. That doesn't mean we don't still have a problem. You've still wrecked one of my fields and leaked your toxic robot blood on everything."

"it's just water. It won't even irradiate everything, with the reactor I have. So I've just crushed one field."

"How many are you going to trample as you go on your way?" The woman crosses her arms, staring.

She's got me there. I probably wouldn't pay them any heed and just trample on through.

"This has been fun and all, but I really need to get moving."

"You'll break down before you even make it to the Misty Lake. I can introduce you to someone who can patch you up, but you'll owe me double."

The last thing I want is to break down in the middle of nowhere. At worst, this detour will just take a few hours. There's no danger to it at all. Besides, I'm probably the most dangerous thing around.

"Well?" The woman taps her foot in impatience.

"I hope your engineer friend is competent. I don't have any other options."

"Oh?" That smug look is back again. "Follow along then. Don't trample any of the fields I tend personally. You'll regret it."

She leads me on a winding path through the fields, meaning I actually stomp through twice as many fields as I would otherwise. Some of them are devoid of crops, either harvested or left empty. I didn't think very many people still used traditional farming methods, but naturally growing foods is a lucrative business proposition in this day and age. It dawns on me that I've probably destroyed a small fortune's worth of produce.

Trying to shake that thought off, I try to get some information from the woman. "Where exactly are we, anyway? This sure as hell isn't the planet we were stationed above."

"This place is called Gensokyo. it's a refuge, of sorts. We keep the Old Ways alive. It also acts as a nature preserve for creatures more-or-less extinct elsewhere."

I'm sure this is headed by someone with too much time and money on their hands. Preservation projects without a corporate backer don't last very long. Either they implode on their own or one of the megacorps swoops in and hacks the planet apart for resources.

Yet another line of thought for me to ignore. "I assume that your sky isn't usually this?strange."

"That probably hit a few minutes before you did. Around here, insane weather is fairly common. Some of the people who easily pick up on atmospheric changes started puking and having seizures and the like. The strong ones like me shrugged it off, but this incident feels wrong somehow. Best we can hope for is it passing quickly."

As time goes on, the gold lights in the sky dim somewhat. it's either nightfall or something is happening to the weather anomaly. The woman watches the sky nervously.

"Going through the forest when it's dark is a losing proposition. My friend lives on the other side, just outside of Kappa territory. Waiting until morning is ideal."

"Whatever prowls the forest at night, I can protect you. I'm much larger and more dangerous than any predator."

"it's not me that's in danger. You don't look like you have any working weapons. That means you're just a big target."

She has a slight point. The pile should still work, but right now, my best bet is to stomp on whatever picks a fight with me. I'm not so large as to make that convenient.

Even so, I should be able to rely on intimidation, right?