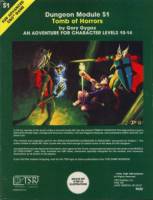 On the world of Oerth, on the continent of Oerik, legends abound about the Tomb of Horrors, an infamous and lethal dungeon, built by the dreaded lich Acererak as his final resting place. Buried under a swampy hill and marked with a skull, it is the final resting place of countless adventurers, drawn to that place by tales of treasure beyond their wildest imaginations. Many have attempted to find the tomb and claim Acererak's treasure for themselves; few have entered the tomb and lived to tell the tale, and none have ever claimed the treasure of Acererak.

The legends of Acererak's treasure, of course, were first spread, and continue to be spread, by the monstrous underlings of the lich Acererak himself. For Acererak is crafting some dark and terrible magic in the depths of that tomb: magic which requires many powerful life forces to fuel it, for it is strongly tied to the Negative Energy Plane, the elemental plane of death.

However, Acererak's magical experiments have jostled things that ought not to be jostled, and bent walls that ought not to be bent, and things have been set in motion which even one as intelligent as a demilich could have anticipated. A most unusual adventuring party will soon be coming to the tomb of Acererak the lich.

This story is, of course, a Touhou/D&D crossover, and that strange adventuring party will be composed of Touhou characters.

There are two active stories on this site which are D&D/Touhou crossovers, and one more which is Exalted/Touhou. All of these involve powerful characters from their respective games crashing into Gensokyo and messing stuff up.

This story will be the opposite of that. It will involve Touhou characters crashing into Greyhawk and messing stuff up.

You may choose any five characters for this adventure. Valid choices are: all the characters originating in all official PC-98 and Windows Touhou games, manga, print and audio works, and VIVIT and Muse from Seihou.

This can only end in tears and awesome. Given Cirno and Daiyousei re spawn at will, Rumia is an Eldritch horror beyond comprehension, Wriggle has Bug Summoning to set off traps, and Keine can rewrite history retroactively, this is gonna be an Awesome game!
Anonymous  2013/04/22 (Mon) 20:26 No. 166923
[x]Alice, to send dolls into the hole with the sphere and into the gate/portal.
[x]Satori to peek at the mind of the illusions and find out the true ending.
[x][x]Reimu and Sanae: Clerics and manzai duo.
[x] Suika: because fuck moving walls traps.
Anonymous  2013/04/22 (Mon) 20:28 No. 166924
[x] Mima
[x] Marisa
[x] Patchouli
[x] Alice
[x] Byakuren

Tenshi the fighter who will try to break things when she gets frustrated.
Marisa the Magic-user who hungers for the treasure. And will blow through the traps.
Okuu as a source of divine magic (sun god) and blowing things up.
Nazrin to be a treasure-hunter thief type while the others do the fighting
Ran to desperately try to keep everyone on track. Also, she's the bard, so she has to play the flute.
Anonymous  2013/04/22 (Mon) 20:52 No. 166930
[X] Yukari
[X] Reimu
[X] Marisa
[X] Alice
[X] Mima

[x]Flandre Scarlet
One of the more effective methods is to attack the tomb's structure.

[x]Suika Ibuki
The numbers and the strength to overwhelm any direct challenge.

[x]Suwako Moriya
We're going into a tomb. Having an earth goddess can only be helpful.

I'll go with this guy.

I just want you to know that I fucking love you OP, with the burning passion of ten thousand suns.

This is a good mix of abilities and personalities.

Satori ought to be capable of manipulating/persuading the group into working together. She's highly perceptive, good at reading people (and their minds), and good with animals, but not experienced at adventuring. Probably a Ranger/Psion. True Neutral, due to her desire to be left alone.

Nue is an outlier to the group, not really fitting in anywhere. She doesn't really have many close friends, so the prospect of reliable allies would be valuable to her. Nue is an ancient youkai, though much of her life has been spent sealed in the underground. Most likely a Rogue/Illusionist. Chaotic Neutral, due to her love of pranks and trickery.

Remilia, like Satori, should be able to keep everyone together through charisma (and stubbornness). A natural leader, Remilia is the best suited to be the party face. She also has strong magic, is good with a spear, and has lived for over 500 years. Her vampiric weaknesses are potentially problematic though. Not terribly sure about her class, but her alignment would probably be Lawful Neutral or Lawful Evil.

Cirno is great for boosting morale as well as being the hero this story deserves. With the exception of Suwako, she should get along with everyone. Cirno has ice powers and should resurrect if she stumbles into most traps, which she probably will. Cirno is likely a Fighter/Sorcerer and is probably Chaotic Good.

Finally, Suwako is a total wildcard. She brings to the table earth manipulation (always useful in an underground environment), a deep familiarity with curses, and several thousand years of experience. Suwako is definitely a divine caster/Fighter, but her alignment could be anything.

Divination ought to extend to finding and searching out traps, amongst other things. True, she's only a Stage 1 boss, but hey, since when have rogues ever been good in a pitched fight?

Some have said things about using Alice's dolls as decoys, but realistically she seems a bit too attached to them to use them as expendable bait.

On the other hand, Mamizou uses dozens if not hundreds of paper shikigami. So. Add in EX-Boss status to boot, and you've got a pillar of power to lean upon in time sof trouble.

She also has a human form, which implies other forms of transformation, in case interactions with others become relevant.

Finally, I want to see a story that puts her a little more front and center than most.

I'm pretty sure there's a bit of canon where she digs through the ground to escape being crushed simply by considering the earth to be a very thick wall. I don't think it takes much to consider the utility of this.

Because sometimes you just need some heavy lifting, and Suika has gotten a lot of attention elsewhere.

Also, her power is a bit vague. I'm interested in seeing where the OP will take it.

I thought long and hard about this one. He's the Straight Man, in more senses than one. Identify at-will is ridiculous utility... and great for a group of foreigners who don't know what objects in this new and strange world do.

If desired, add a dash of MANnosuke for... well.

That and it's not like you'd lose readers for the switch.

This is a three-way tie with two winning spots between Yukari, Suika, and Suwako. I need two tiebreaker votes. Please vote for exactly one of the following:

The first two characters that get voted for are automatically called for.

>>166933
Hopefully by avoiding them; otherwise, in the same way other stories have handled them, by going back a few choices.

>>166938
>>166949
I'd love to see or write a Seihou-based story, and I'd love to include Gates.
Unfortunately, Seihou characters other than VIVIT and Muse would have trouble fitting their flying machines into the tomb, and without them, they would have a hard time contributing. Alas.

Fucking whoops. I misread that due to this damn headache I've been fighting. Read that as two of three for some reason.

Yeah if it's only one person, then [x] Yukari.

I personally like the updated to 4th (official) version the most, because it’s still deadly but doesn’t have instant death anywhere, and provides lots of skill checks that allow characters to notice that The Devourer is, in fact, not a nice place to crawl into.

Eh, can see that. I think she did get a hair better after the Sad Drunk act at the bar.

She still forces illusions onto people that warps reality. Of course the bigger/more the illusion is, the stronger the feedback.

Could you please clarify this?

Yukari's already got enough votes to make it in,and with Yuuka and Flandre we should have enough force to make it by. Therefore,