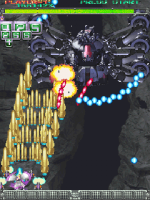 Tl;dr
You are a cyborg captain of a high-tech amphibious battleship, stranded in some strange fantasy land you're fairly certain is part of your psyche. Your choice in music has angered a priestess who kicked your ass with pieces of paper.

"Oy! Inner child!" You yell out at Cirno. The ice fairy looks at you with mild curiosity, more interested in poking at the hatch you came out of.

"What is it meanie?" she says. You suppose you have been a bit of an asshole towards her, so in a split second decision you smile and gesture her to come closer.

"Oh don't be like that. I'm sorry all right, want to come with?" You offer. The ice fairy floats down with a happy smile.

"Really?" she asks. A quick glance at Reimu tells you the shrine maiden just wants you to hurry the hell up as she impatiently dances through the sky at the edge of the clearing. Neat trick really, it nearly makes you want to get yourself a flight mod. Not really of course, navy for life!

"Yeah really. Come on." you say, grinning wolfishly. "Race you there."

In hindsight, a fairly dumb thing to say given all the trees in the way and your still healing knees. Had you still had your original lungs you would be panting them out by the time you arrive at the shrine, Cirno triumphantly awaiting you at the gates. With a dramatic flourish you cede defeat.

"I must say fair lady you move swifter than the wind! I find myself humbled before you oh fleet one." you say. Cirno cocks her head to the side and Reimu actually snorts a bit.

"Hey you! You're the one that drove that black thing?" a voice calls out. Twisting in such a manner that your greatcoat flaps about you dramatically, you see a girl with horns glaring at you.

"I gotta hangover. Thanks for the wake up call, let me show you how much I appreciated that." she says, half glaring half squinting at you.

No, not really, but it fits with the other D choices.

C'mon, have some pizzazz.

"My fair lady I apologise." you say with a bow. Brain damaged you may be that is no reason to be impolite, even to a figment of your imagination. The horned girl crosses her arms and looks at you sternly. The two of you lock eyes for a moment, the frown not leaving her face

"You'd do it again in a heartbeat." she says flatly. You pretend to think about that, then smirk.

"Yes." you admit. Behind you Reimu sighs, a sigh you identify as not a sigh of defeat but rather one along the lines of 'oh no not another one'.

"You're quite an asshole." the horned girl says.

"You're quite sharp for someone with a hangover." you observe.

"Of course, I wouldn't be much of an Oni if I let just a little booze get to me now would I? Name's Suika Ibuki. I think we'll get along just fine." she says and returns your smirk.

"Charmed." you say and make your own introductions. Afterwards you cock your head to the side.

"Now I must profess my lore is somewhat lacking on Oni, any particulars I should be aware of?" you ask

"Eh, just stay true to your word and don't make too much of an ass of yourself. What're you doing here?" Suika says.

"Looking for a way out." you say, trying to place the girl in your mental map. Reimu was self control or something comparable, Aya obviously a form of curiosity, but what the hell would an 'oni' mean? You've never even heard of the term before.

"Just like that? You barely got here." Suika says, and you shrug.

"War to get back to I'm afraid, much as I like it here." you say. Suika perks up.

"At least let us give you a fare well party?" she asks.

"So? It'll take some time to collect everyone here, and in the meantime we can get to know each other." Suika says.

"Here as in at my shrine?" Reimu asks warily.

"Come on it'll be fun!" Cirno says. "There'll be party balloons and food and games and stuff and pinjata and drinks that make you feel all fuzzy and-" she rambles, and Suika only encourages the fairy thing.

"See? The fairy gets it." the oni says enthusiastically. You and Reimu share an uncertain glance.

"Getting through to Yukari could take a while, but she's bound to show up at a party here at the shrine..." Reimu says, and that combined with the combined moe assault of inner child and intoxicating high spirits of inner party animal nail the final lid on the coffin.

"I suppose it would do me some good to meet my other inner aspects. How can I help?" you say.

Lets meet the Rest of our subconscious!
Anonymous  2013/04/09 (Tue) 01:35 No. 166466
[x] Promotions! (spread invitations)
Using the foghorn and PA system, of course.
Dakkaius Maximus !Ri/ORmT92M 2013/04/13 (Sat) 16:54 No. 166623
Updating.
Dakkaius Maximus !Ri/ORmT92M 2013/04/13 (Sat) 20:52 No. 166626
With Suika setting up the temple grounds and Reimu being shanghaied into providing food and booze you set to work on the task you chose for yourself: Spreading the word of the upcoming party annex festival via a bunch of flyers. Officially the event is labelled 'The captain's fare well festival' and scheduled to take place in three days, but you're still not certain what the blazes to expect. How would this work if it's all in your mind, what would it represent? Could you get drunk in a delusion?

Doubts about your delusion theory are worming their way into your brain. As you run behind Cirno towards the distant human village, you can see the wind rustle each and every individual leaf, you can hear all the different birds chirp overhead, and you can feel the bones shatter in unique ways as you punch the occasional annoying attack fairy in the face. The entire world is just too vast to be a mental projection, to great a level of detail is present to be a full on simulation. It's an interesting conundrum, because somehow that would mean that the flying violation of thermodynamics (aka Cirno) is also real somehow.

By the time you reach the gates of the human village, you've settled on 'fuck if it matters'. You are first and foremost a practical man, and if hosting a great party somehow summons this Yukari woman that will get you back home? Why not. No matter what it is supposed to represent a party is still a party. You figure you will come out ahead no matter what happens.

"Oy boat man. You even listening?" Cirno whines. Mentally you quickly review your audio logs from five seconds back.

"Yes I was. You were saying you were worried about the gate guards being mean because I was new in town." you lie smoothly.

"Well then watcha gonna do about it? You can't just fly over the walls." she says. You grin at that.

"Watch me." you say, not slowing down as the wall approaches. Fifteen feet from the base of the wall, you leap, and point your left hand at the top. With a loud hiss of high pressure air suddenly being released, the hand shoots forward, trailing wire behind it as it grasps the top of the battlements. With a whine of electrical motors you pull yourself up and over, executing a somersault at the apex of your jump. Arresting your fall with the wire, you gracefully lower yourself to the ground on the other side. Going by the surprised shouts of the guards, you guess they did not really appreciate that stunt.

[X] Hello officers, did I upset you?

Seeing the guards approach from all sides, the first thing to do would be run away or at the very least make a larger scene than you already have. As it is though you decide to at least attempt to stay in the good graces of the locals. You fold your hands together behind your head, basking in the sunlight as you wait for the guards to surround you.

"Stay cool, I got this." you reply confidently.

"I meant, relax, take a chill pill, don't worry." you say, then the guards are upon you, surrounding you with their halberds pointed at you. The light glow from the weapons lead you to suspect they are a mite above regular sharp metal pointy objects. You're in no particular hurry to find out the truth behind the glow, you already know that this whatever this illusion is stuff can still hurt a lot. The armour they are wearing has several glowing runic markings.

"State your business yokai!" someone authoritative states. You smile lightly at the man, going by his slightly fancier hat ranking officer, and bow just deeply enough and slowly enough not to give cause for offence. Despite this several guards shift their grip slightly, ready to shank you. Damn these people were wound up tight, no wonder that oni girl recommended a party. Perhaps these guys were a collective representation of your combat stress?

"Nothing major officer, I was sent over here on to spread the word about a festival, that's all." you say, slowly but overtly picking a flyer from your breast pocket. Ever so carefully the man plucks it out of your hand, briefly scanning over the contents before glaring at you.

"Why did you not just use the gate then?" he asks

"Nothing beats a good entrance. Entrances are important." you say seriously. The man gives you a glare, and you just stand there and stare back, neither of you giving an inch. The guy has a damn impressive moustache as far as you're able to tell. Eventually the captain appears satisfied and signals his men to raise their halberds. As he makes to leave, he glances over his shoulder just once.

"No trouble raising." he says. You give him a mocking salute as he walks off. In a way you know what his deal is, he's just trying to protect the town, but in another way, you did not detect a single enhancement in anyone in the guard: His threatening posture meant about as much as the angry buzzing of a housefly to you.

Now to the delivery of the flyers:

How do?
[ ] Maximum speed: Start free running through town tossing flyers everywhere, Cirno does the same while flying overhead.
[ ] Maximum efficiency: Paste some to announcement boards, hand out others to individuals, loudly announce it by voice, that sort of thing.
[ ] Maximum bird! Make creative use of carrier pigeons
[ ] Maximum write in

There was this one story where we kept using Lily as our own personal assassin simply by ordering her to inform people of spring.
Anonymous  2013/04/16 (Tue) 08:18 No. 166709
[X] Maximum Firepower: Festival Sign [Everyone's Invited]

This is great. We're doing this.

My suggestion for how to accomplish this would be... Do we have any way of remotely controlling the battleship? Or at least the guns? And does it have any airburst ammunition, or other suitable forms of explosive weaponry?
You should see where I'm going with this.
Anonymous  2013/04/16 (Tue) 11:03 No. 166713
[X] Maximum Firepower: Festival Sign [Everyone's Invited]

"No Trouble" says the guard.