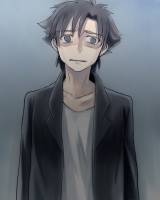 It had started innocently enough. While hunting, I had found various pamphlets in another language. After a lot of work with a dictionary, I had eventually figured out that it was about the conflict between the Proletariat¹ and the Bourgeoisie² that keeps bleeding them dry and exploiting their labour. Really, overall, I liked those texts. Unlike the common stance of 'we can't do anything, let's just all stay in the village where it's safe', it instead promoted a more active way to behave. It declared that one should always fight and work to improve things, that one shouldn't tolerate anything less than our due, that we should do everything we can to improve things.

Having discovered something so incredible, so revolutionary, I took to talking about it with others. One of the biggest points I kept coming to is how big Gensokyo is and yet we live in a tiny part of it and keep to it. Maybe the fact that I'm a hunter makes me more aware of it, but the fact that so few of us dare venture out annoys me to no end. There it is, a great big world and we're kept confined by the Youkai oppressor! Apparently, though, there's some people that got a bit annoyed by me talking about that so much and, one day, talks started to get a bit, well... heated. I ended up arguing with an annoyed Mayor for a fair while and, while I kept saying it was possible, he kept arguing that no, it wasn't.

To make a long story short, I ended up agreeing to a bet in the heat of the moment and now, well, I'm in a bit of trouble... Basically, I’m going to live, on my own, outside of the human village for a year. If I make it, I'll have proven that it is possible, but when -their words, they all assume it'll happen- I slink back home shamefully, I'll never mention it ever again. But you know what? I'll show them! I, Sonoda, will live on my own, out there, and I'll have such an easy time of it they'll have no choice but agree with me that it is not only possible but easy!

²Clearly some kind of vampire or leech-like youkai.

Posing heroically while Imagination drew his portrait, Pride smiled, "At last, we shall show them all! No more cries of 'Sonoda, you moron, shut up already.' will be heard, we shall be known as Sonoda the wise! Sonoda the Brave! Sonoda the Great!"

From his corner, Realism sighed and rubbed his forehead, "That's good and all but we need to do it first. Hell, we need to figure out where to live in the first place. What are our options, Memory?"

A nearby pile of books wiggled and coughed before toppling to reveal Memory buried in it, reading from a book, "Our options are fairly varied, there's a lot of ground after all but first we need to pick an area I suppose. I assume we need to avoid any areas that are too civilized so our options would be... well, for starters, there's the forest of magic and the forest of the lost, there's that nice field near the sunflower field, that's a very pretty area and strangely devoid of youkai. There's also that lake in the forest, it's not too bad to get to, at least during the day. I suppose I should mention the youkai villages as well, the Kappa and Tengu villages to be exact."

Pride snorted, "There's no way the Tengu would let us into their lands though I suppose the youkai mountain, outside of their lands, would work." Realism winced, "That's not exactly a safe place though, same with the forests and the lake. I know we can't find our way in the forest of the lost so that's not an option. The field and the Kappa village, if they let us in, would be the most sensible options. We've always had good relations with the Kappa, our cucumber donations when we go to fish on the lazier days will pay off now."

Pride raised a fist, shaking it as he yelled out, "Screw sensible! Is this not us proving that anywhere in gensokyo is ours for the taking!" I say we should live in the heart of enemy territory and prove that even in adversity, we can survive!" Self-Control struck his hammer a few times, "Calm down, Pride, calm down. Let's argue about our options." Realism suddenly struck a fist in his hand, "And we need to pick who we'll get to build our house, we know a few good contractors." Memory nodded at that, "We do, the town's carpenters already offered to build the house at half price though, to be honest, getting Kappas or Tsuchigumos to build it would go a lot faster. Both of those options would also build the house for using Kappa devices as well while the village's carpenters can't really do that part."

Instincts grumbled from his end, "The Tsuchigumos tend to make houses full of spiders, though, especially pre-human shaped members of their kind, is it a good idea to risk moving in and ending up sharing our house with a sentient spider or two?" Pride snorted, "They are, at most, hand-sized and don't really like to eat humans, there's no risks and getting some goodwill from a growing youkai might pay off later on." Realism nodded, "Point. I'd say all three options have their pros and cons, really."

Organisation nodded, "Right then, so here's our options if I understood right."

*bows in apology* I would have preferred to use an original picture but after a long while poking around on danbooru and only finding cool, evil or cute male pictures (Sonoda is none of those things) finding that one made me go 'perfect'.

>A house on a lake. Sounds lovely. If we get really lucky, they might build him a house in a lake.

[X] Human carpenters
If we want to prove that humans can expand outside the village, relying on Youkai labour is self-defeating
Anonymous  2012/11/18 (Sun) 02:26 No. 162860
>>162859
He's not trying to prove that humans can expand without youkai help. He's trying to prove that they can expand at all.
Anonymous  2012/11/18 (Sun) 02:28 No. 162861
Argh, now I wish there was a Kiritsugu Quest. Probably either where Yukari takes the place of Natalia, or where while blowing up some guy's shit (for fleeing thereafter), he inadvertently busts his way into this massive Reality Marble...
Before anyone gives the obvious reply: no, I'm a fucking terrible writer.

Nope. I have simply gotten in the habit of using * to denote actions from IRC chat, I feel it adds a bit more personality to a message.

As for not breaking the line between each speaker, Is that truly necessary? I'm under the impression that excessive line breaks should be avoided.
Anonymous  2012/11/18 (Sun) 19:14 No. 162882
[X] Plains
Because the protagonist is so badass.
[X] Kappa Engineers
Anything built by Kappa is much more reliable.
Anonymous  2012/11/18 (Sun) 19:50 No. 162883
>>162881
Every writer has their preferences, but your ultimate goal should generally be to work towards clarity. If your story is confusing and unreadable, then it doesn't matter how interesting it might be.

Spiders. Always spiders. Also because I'm wondering why and how spiders would have the capability to build a home.
And if the plains are clear of youkai, that certainly makes things convenient, doesn't it?
Anonymous  2012/11/19 (Mon) 05:14 No. 162897
>>162896
I think there was mention somewhere of the earth spiders of Gensokyo being skilled architects - a reference of sorts to a spider's natural talent at spinning webs I suppose.

Waterfront property is always highly sought after and the kappa aren't too reliable for projects that take longer than a day.
Anonymous  2012/11/19 (Mon) 11:05 No. 162900
Unbeknownst to us, we may already be locking our route:
Kappa-built house is Gurren Lagann-style rapidly-escalating action comedy mecha route.
Tsuchigumo-built house is slice-of-life comedy with possible harem? romance route where we have to put up increasing numbers of Youkai in our house, a little like Love Hina but with more bro spiders to bro it up with.
Human-built house is Lunatic-modo survival horror route. Unlike the first two, we have neither technology nor Broukai as defense against the feral Youkai who wish to rape, kill and/or eat us. Not necessarily in that order.

Location determines who we meet.

Plains is because. Just seemed like something to look into.

Getting in good terms with the spiders, for they dominate the earth.

Mmm, among humans, I'd say about half either way. Among youkai, I guess it depends on specie but most of them are 50/50 too.