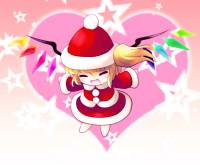 Cripple Keine: A Christmas Story
By SolusLunes
>>/shorts/240
A Christmas story only he could bring us.

“Got a present for you.”

A giggle as he pulled her along through the thickening storm, snow crunching at their feet. Somewhere amongst the white fields, they stopped. The man took a tarp off his surprise.

Oil drum. Improvised open-air bath. Like a hot spring in the middle of the storm.

“Oh yes. I’ll take my pants off first if you prefer.”

She giggled, then shrieked as their clothes came off. A pair of jeans tossed into the nearest snow bank, socks discarded where they lay, tops nowhere to be found. A small fire was lit, and the two carefully found their way in. The water steamed into the air around them as they shuffled, tripping over each other as they tried to squeeze into that small space.

The two laughed, their bodies brushing against each other as they moved together. An awkward pose, a misplaced arm. They found their chests touching.

“Hey, Youmu… when did you grow breasts?”

She splashes at him, shirking to the other side of the barrel, only a few inches away. Pouting, she splashed water again at him.

She stuck her tongue out, splashing at him again. He laughed, she laughed. He splashed back, soaking her hair. She squealed, practically tackling him to get him to stop.

He yelled, grabbing her tight as the barrel tilted over, spilling its contents.

Recovering from the sudden jolt, Youmu looked up to see the water running across the snow, already overtaking their clothes.

She gasped softly in surprise.

“Heh, guess we’ll just have to huddle for warmth.”

They embraced.
No. 151517
Faefather: Happiness
By TwittyandStrange
>>/shorts/272
A spare moment of happiness for the Faefather.
No. 151518
>>/shorts/274
Title: A Very Wriggle Christmas
Related story: In the forest, a Dancing light (quasi-canon)
By Oracle

A light wind stirs the freshly fallen snow from drifts piled against stores within the village. As the sun begins to dip below the horizon, the sky takes on an orange hue tinted gold nearest the horizon. The clouds floating above are shot through with a pinkish tinge, and anyone still out on the roads hurries to finish their errands before night falls. In front of one of the stores, two lanterns hang from the eaves, their flickering light illuminating a sign swinging gently in the breeze:

The Confectionery
Every Sugary Treat Imaginable!

The lettering is bold and stylized, but the paint is faded and chipped at the edges, hinting at the true age of the store. A group of three walks up the street towards the door; one figure, a child, standing only to the waists of the others. She rushes ahead of her escorts to peer through the window, a brief gasp of joy escapes from her lips as the sight of the treats displayed in the window come into view. There is licorice, and toffee also; candied sticks of all flavors filling jars that line the shelves. Containing her anticipation for the moment, she slides open the door and steps inside.

Upon entering, her senses are assailed by the sweet smell of peppermint, its aroma masking all others. A gramophone in the corner emits the grainy sounds of a string quartet, contributing to the pleasant atmosphere inside. Her eyes move over the multitude of candies before coming to rest upon an elderly clerk standing hunched behind the counter. “Excuse me, sir. I know it’s late, but how much does a bag of caramels cost?”

Looking up from his work, he answers, “Why, that depends on how much you take.” He smiles and reaches beneath the counter and hands her a bag, gesturing to a jar at the center of the room. “Use the tongs to take what you want, then I’ll weigh it out for you.”

She nods, then quickly steps over to the container and begins selecting several of the treats for purchase. As she moves them into her bag, the music from the gramophone ends, and the clerk moves to replace the track. Switching the vinyl record and setting the needle in position, his weathered hands wind the crank in the side of the player, and music again fills the store.

“I’m dreaming – of a white Christmas…”

Walking back to the counter, he hums along to the familiar tune until the girl returns. “I believe I’m done now.” She places the filled bag in front of him, then turns her head to the gramophone. “This song, does it bring back memories?”

Nodding, he takes the pouch and sets it on a small weigh station, arm immediately moving off center. “That it does, Miss Hieda. That it does.” A clacking sound resonates from the weights he slides to balance the treats. “I suppose you could call it, sort of a nostalgia, for the season.”

“Of what the season lacks, you mean.” The clacking wavers, and the arm falls below center, now overbalanced. Miss Hieda steps back from the counter, closing her eyes. “I heard that you’ve lived here for some time, alone, after arriving from the Outside.”

He shakes his head and sighs, focusing on realigning the weights. “No use pining after what’s long gone. I’m happy just to live here and see the delight on the faces of those who come into the shop, be they children or the occasional fairy. Besides, if you’ll pardon my rudeness, I heard you’re also a mite older than you look, ah?”

“To hear sleigh bells in the snow–.”

Eyes opening, a frown crosses over Miss Hieda’s face. “Now who told you that? Gossiping about someone’s age is really rude, you know.” The expression soon leaves, though, and turns back into a grin. “Still, I think it’s good to have treasured memories, and things to remind you of them. Wouldn’t you agree?”

Smiling again, the clerk finally balances the bag and ties it off with a bit of blue string. “Of course. They say that if you’ve lived life well, you can enjoy it a second time when you look back on it. I really do enjoy the season, Miss Hieda; don’t worry yourself. That’ll be ¥478.”

“I’m dreaming – of a white Christmas…”

Miss Hieda motions to one of the escorts standing at the doorway, who steps forward and presents a bill to the clerk. Nodding in appreciation as change is made, she says, “It’s natural for everyone to have at least one person who worries about them. You’d be surprised how many of your customers wish you well; though I’m sure you think I’m the only one nosy enough to talk about it.”

The clerk’s laughter is punctuated by the ding of the opening register. “Ha ha hah! Oh, my, open as always, I see. I’ll be sure to keep what you’ve said in mind tonight and tomorrow.” Closing the drawer, he draws himself up and starts to stomp towards Miss Hieda in a mock fashion. “Now, be off with you, before I decide to charge you double!”

“With every Christmas card I wri–te,”

Giggling, the child turns towards the entrance. As an escort opens the door, she turns back to the clerk. “Don’t be so morbid, talking about ‘looking back on your life.’ You’ve plenty left to do before you can sit down and stay lost in your memories all day long.”

“May your days be merry, and bri–ght,”

With a smile on his face, the clerk waves to bid her farewell. “I’ll keep that in mind. May you have a pleasant Christmas Eve, and a Merry Christmas!”

“Yes, and a, uh, Merry Christmas to you, too!” Miss Hieda leaves with her entourage, and after the door slides shut, the clerk’s voice rings out in time with the gramophone.