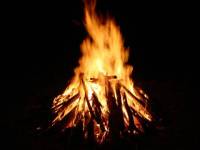 "Sit down, child, sit down." The old man gestures to the seating at the side of his campfire. "If you weren't going to listen, you wouldn't have bothered to come. So sit, and hear the tale." You seat yourself on an old piece of twisted metal, reluctantly. It had been a simple question, the same as every other youth asks upon coming of age.

'What do I do with my life,' You had asked, 'where does my path lie?' He had barely begun his tale before you were on your feet again, not sure whether you were planning to simply leave, or...something else, maybe.

Perhaps at the end of his story you will receive the answer?

"Many, many years ago, men, who believed themselves great, seized the eggs of the Great Raven..."

You can hardly believe what has happened. You had expected a task not unlike those your friends had received, something...normal. To be a farmer, or to tend the waters, keeping them pure for the village. But...to be a wanderer...

Three generations had passed since the last wanderer had been sent from the village. That you were selected was seen as a good omen, and of course you were sent off with a feast.

This morning, however, you were woken with the rising of the sun, and, as you emerged from the small hut that had been designated for your rest that night, you had found nearly all the people of the village standing to either side of the path, watching as you took your first steps into the early morning sunlight.

From your left, a young girl had stepped forward. The daughter of one of the herdsmen, you thought.

She held something in her hands. It took a moment before you recognised it as one of the leather rigs the herdsmen would wear to carry their food and water as they ranged with the animals. This one though looked as though it would carry much more.

She held it out for you to take, and, after a brief moment of hesitation, you did so. It was the work of only a moment to set the straps in place, and to belt it on.

Continuing down the path, you found that each family had brought a gift. Most were foodstuffs, the sort that would keep for a long time. Some, however, were more unique.

Your friend, Recco, brought an ancient keepsake of his father's.

"Listen, pop...pop said to give this to you. He said you'd need it." He held forth an old, sheathed knife. You recognised it immediately, of course. It was an ancient blade, forged before the Hatching. These knives, just a hair over a foot long, were of the same strange metal used for so much in that time. Their rarity was incredible. In all of the village, there were only three, all valued immensely for their strength and durability. And since no outsider had come to the village since your father's father's father's time, none knew of any others.

"You'll need it. ...Listen...stay safe, okay? Don't do anything stupid..." He backed away, before turning and dashing off. You fastened the sheath to one of the straps running across your front, wordlessly.

At the gate, two men were standing in the center of the path. One was a water-tender, ready to fill your rig for your journey. The other...

"Ah, so it's you..." The old man peered down at you from behind the 'goggles' on his face.

You look like a bug, old man... For the millionth time, the thought flashes across your mind. At almost sixty years old, he was the eldest of the people of the valleys. Thin and emaciated, he showed the signs of the illness that took everyone eventually. You could see that his face was drawn and pale, and, suddenly, it dawned on you. He was really going to die, soon. It had always seemed impossible, to you. After all, he had been alive for so long...

"Yes..." He looks at you for a long moment. "Here, boy. You'll need this if you are to range beyond our valleys." From his belt, he unhooks...a strange-looking mask. Two darkened glass covers for eyes, and a strange apparatus where the nose and mouth would be. You take it, and look at him questioningly. "It was my grandfather's, and his grandfather's before him, and so on, all the way back to the Hatching, lad." The words rock you. His family was so long-lived that they had each known their grandfather... "It will protect you from the poison of the air. And these..." He hands you a small box. "Will renew its protection." He shows you the small 'filters' that guarded against the poisons, and with a practiced twist of his hand, removed and replaced one. "I don't have a son, so I give this to you. May it serve you well." He turned and began to hobble away, ignoring your words of thanks.

It had taken a full day to reach the end of the valley, and from there, you were greeted with your first glimpse of the lands beyond. You paused to fasten the mask on your face. Unfamiliar with the task, it took a few tries before you were satisfied with the fit, but at last, you stepped clear of the valley, and into the golden plain that stretched out before you.

The gold ...plants, you think that they are probably plants... sway in a gentle breeze, almost knee-high. Hesitantly, you step forth, into the sea of gold.

...Now what are you supposed to do? Like every wanderer before you, you know your task, of course - to speak to one of the gods on behalf of the valley, and earn for them a blessing - but how are you to find a god? Well, you suppose, more importantly, which god?

On the horizon, you can see a dark blotch, and, figuring it as good as anything else, begin to walk towards it as you consider the question.

Which of the gods do you seek?

Mentally, you shrug. Out of all the gods, you can't just pick one. So you don't. You'll figure it out eventually, so you just discard the matter and keep walking.

Perhaps you'll see a sign, and perhaps you won't, but there's no point in worrying about it now. You keep walking, watching the blot on the distant horizon.

Hours later, you are bored. Bored bored bored. The novelty of this field had worn thin early on, and that blotch on the horizon is still really far away. When you were told you would be a wanderer, you never expected boredom to be a thing you'd need to deal with. You were expecting more...terminal excitement.

Oh hey, what's that over there? You divert a bit, and, as you draw closer to the shape, you see that it's...a really big flower. As tall as you are, in fact, with a dark center surrounded by yellow petals. ...The disturbing part is that it turns to watch you as you walk. You know flowers shouldn't do that.

Somewhat creeped out, you continue onwards, drawing closer and closer to the dark blotch on the horizon.

You stare up at the strange stone building in awe. This...this is truly the work of men? Indeed, the powers they possessed before the Hatching were grand indeed, for before you, as though formed entirely from a single huge block of stone, is a great building. Oh, it's certainly shattered and worn, but still clearly recognisable as what it is.

Looking around, you see, here and there, the shattered remains of other, similar buildings. The one before you seems to have come through the years more intact than any other.

Five stories... how the people of the pre-Hatching era managed such a feat, you're sure you'll never know.

The sun, however, is setting once more, and you spent the entire day walking. Quite frankly, your feet hurt, and you want to rest.

From where you stand, you can see a number of good options to make camp.

Well, the cellar will probably be the warmest option, at least. Underground, with most, if not all of its walls intact...yeah, that seems like the best choice. Nodding firmly to yourself, you move over to the metal sheet that mostly obscures the stairway. It's not a small sheet, but you figure it should be easy enough to move.

Planting your feet widely, you crouch low, gripping opposite sides of the heavy sheet of pre-Hatching metal, and with a heave, flip it to the side, out of your way. With a mighty crash, it slams to the ground, and you start down the stairway.

At the bottom, a sturdy door greets you. You have to admit, for a door, even down below ground, to not only survive the Hatching but the innumerable years since...mankind was once great. You turn the knob, only to find that though the mechanism seems to function just fine - another wonder - the door refuses to move. You give it a firm shove, to no avail, before finally just ramming it hard with your shoulder. It only hurts a little, and the door grates accross the odd stone of the floor within, just far enough for you to slip in.

You do so, leaving it open so you can leave in the morning - given the angle, you don't know if you could pull it open, instead of pushing. You take a look around the room...only to realise that it's really quite dark underground, here. You fumble for a moment with your herdsman's rig, before producing a lightstick. Crushing the head of the fungus, you start the light shining. Holding the stalk, you raise the light source high, and take a look around once more.

...that is a big spiderweb. You set your sleeping roll out on the other side of the room. Disturbing the spider that made that...probably a bad idea. Of course, you're much too large to have to worry about it coming after you, but it would certainly be able to give you a nasty bite. There's quite a bit of debris down here, you note. Luckily the area you chose was mostly clear, but a lot of floorspace has at least the token chunk of stone or unidentifiable object.

Pulling out your flint knife, you cut the end of the lightstick, allowing the viscous fluids contained in the stalk to leak out. You are, however, stymied by your inability to spit through the mask. Normally you'd just mix a bit of saliva with the 'sap', and stick the lightstick on a wall, but...

Weighing your options, you decide to just shift the mask aside for a moment. There, that's one problem taken care of, and you don't feel like you're dying at all! You adhere the fungus to the wall, and look around. You have about half an hour of light before getting plunged back into darkness, and outside, the sun's mostly set.