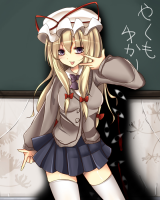 Today is a dire day-
A dark event-
A foul reckoning!

You fail again to pry your hand from Master Kasen’s iron grasp.

--She cuts off your next protest.

“You need your hands to multiply! You can’t find your house on a map! You thought platinum was a fruit!”

It’s not your fault if it sounds delicious!
And there's a good reason for the map thing!

“No buts! The school invited me to speak, so you’re going to come along!”

Fist raised, you curse the name of “school.”

For the new guys:

You are a particularly adventurous young human dedicated to ditching school by training to become a hermit. You can fly under your own power and have the strength of ten men.

Who cares that “back to school” isn’t a holiday! Labor Day is, and that’s enough!

Reading these stories may enhance your enjoyment:

Let's go for something where we can use our hands. But also isn't painting.
No. 145461
[x] Arithmetic

You fool, you know the kind of horrors this will unleash. There is still time to turn back.
No. 145469
[x] Ethics

I warned you about the school-themed touhou stories bro. I told you dog.
No. 145473
[x] Ethics

wins. I wasn't originally expecting to write this so early, but whatever!

“You listen to my lectures every day! They’ve got another teacher doing a talk, maybe she’ll have more luck than I have.”

You force your way into the packed classroom and squeeze into a seat in the back row.

Keine hasn’t appeared yet, at least! You hope she’s not teaching today. Her last lecture on ethics really hurt your head.

Just then, the green-haired youkai that’s always sweeping up in front of the temple walks in the door. She cups her hands around her mouth.

The windows rattle, and the other kids stop talking to cover their ears.

“Hijiri is giving a lecture personally to the older children, so she had me come here.” She says, twiddling her thumbs. Clearing clears her throat, she begins speaking in a perfect copy of the monk’s voice.

You yawn as she drones on and on about youkai and humans and something.

Hey, isn’t that Rumia? Why is she in the school? Keine threw her out last time she tried. Right through the wall.

She seems really focused on the lecture this time, though. You listen in. “...temple fully endorses interspecies relationships and marriages...”

Interwhatsitses? You tune out again. Oh, now she’s blushing. When the lecture mentions “half-youkai” she jumps a little.

[ ] Throw an eraser at Rumia
[ ] Keep watching her

They say bullying is a form of showing affection for school-aged kids, you know~
No. 145482
[x] Keep watching her
Youkai girl is learning; please wait warmly.

You can’t afford to blow your cover. You’ll just have to sit tight!

She fidgets with her hands for the next few minutes. Then, after glancing around the room red-faced, she slips out the door, mumbling something about “bathroom.”

You slip out into the hall, with the same excuse.

What a great idea!

We should thank her for giving us that excuse to leave class! That was so nice of her!
No. 145548
[x] Off-white

wins. Maybe an update this evening?

I'm glad someone caught it.
No. 145601
>>145594
I was quoting him in response to >>145590 that it might actually have been a reference and not just a simple statement. Yes, I could have constructed my post so much better than I did to get my intentions across, but when answering the phone my divided attention erased what I had in mind and I ended up submitting a quick, half-assed reply. Being on my laptop at the time didn't help, either.
No. 145605
This, of all things, spawns the largest discussion in a holiday story to date.

Clearly, I have had my priorities all wrong.
No. 145606
>>145605
Well it's Rumia, naturally people are going to discuss what color panties she wears.

>please don't end up obsessed with discussion
I don't know how to break it to you, man...

One of the doors is open!

They redecorated the carpet pattern in the nurse’s office. Brown spotted is pretty tacky, you say.

Maybe you could stay here and-

“You’re a student here, right? Are you sick or hurt?”

She’s a lot younger than the last nurse. And a girl. Really a girl, this time. She gives you a shy smile, then--

The bell rings for the next class.

So much for that idea.

...I'm not entirely sure why I'm subconsciously associating Rumia with this. Probably no relation.
No. 145615
[x] Arithmetic

It's been a long time, my friends. Too long for most of the children to understand, in fact.
No. 145616
[x] Arithmetic

Hahaha, I didn't expect that.

You've found the perfect profession, Heather. Nurse outfits would look good on you, and you can get all the psychotherapy drugs you could ever need.

Now bring on Reina doing the nude modeling.
No. 145626
>>145623
Sometimes, an emoticon is the most efficient way to express a thought. Like this time.

>discussion
If you really want discussion, making a story that isn't a sequence of unrelated setpieces might be a good idea. I love Holidanon, but it's kinda hard to discuss anything when nothing is predictable.
No. 145627
[X] Painting

I'll see if I can churn out another update around Thanksgiving, when I have a break, maybe another one later over Christmas break, even!

“Your lack of refinement the Underground look civilized. You need to learn how to appreciate art!”

What about the wood carvings she was studying last n--

“Not that kind of art!” she shouts, cheeks pink.

The desks are spread out, with paintings on painting-stands in front of them.

“Your assessment is entirely correct, while at the same time lacking everything a proper greeting should have. Simply amazing.”

“At least stop reading while you criticize them,” the red she-devil says, over her shoulder.

“The blow to their confidence will be at least twice as strong if you give them your undivided attention,” the snappily-dressed devil man quips, from the other side.

“You really shouldn’t be giving that kind of criticism to middle schoolers, miss Knowledge.”
It’s an ordinary, unremarkable highschooler!

With a skip, she’s standing on a soapbox in the center of class.

“Today, we’ll be doing model paintings, so look at me closely!”

With a theatrical sweep of her arm, her vest is already off, and her shirt is down two buttons!

Could this be a new record!?

Pajama gives her a sharp glare, and she freezes. She sends an appealing look to her ally, the devil man!

“Awwww. Fiiiine.” She redresses. The entire class joins her in a disappointed sigh.

The wizard reads in the corner, the devils both vanish toward the restroom, and the students placidly paint pictures of mundane apples and vazses. Jin keeps glancing at the teacher instead of his subject.

The devil woman comes back with messy hair, followed by the other devil and... a fairy maid?

Now that that class is done, which one comes next?

Wait! That’s not right! What were you thinking!"

Schools blackest of temptations had nearly caught hold of you! You must remain strong!

He can't tell the difference. But I suspect there aren't many fairy maid OCs joined at the hip to Koakuma.

You're pretty much just asking for it now.

>What about the wood carvings she was studying last n--
>“Not that kind of art!” she shouts, cheeks pink.
The Wild and Horneyd Hermit was looking at The Fisherman's Wife?
No. 145939
>“Yes, yes. Please take your seat, Jin.”
>“My name’s not-”

Oh you bastard, you are a real bastard for making me remember THAT story. Of course if this story has the same spirit as that one, then don't quit and actually finish this.
No. 145940
>>145939
>telling him to not quit this

If he did, I would be much happier myself. This story itself was kinda salt-in-the-wound, and the mention of Jin (out of all the names with the exact same meaning) was kinda the straw that will break the camels back.

Notice the number of people not butthurt over the story? I read it too, you know. Get over it.
No. 145968
>>145955
GH's fame/infamy has eclipsed anything in post-HY /sdm/. I figured something like that happened in the update.

All that talk about GH reminds me how much i miss it. No Rumia route leaves me in despair. She was such a bro and we finally could talk about her mother and life before this.

I just realized Dr. Q is the only person on this site who has actually completed a story with Rumia as a main character. As far as I know, I haven't read everything.

Because that's how writers decide which parts were good. It's a comedy story. It'd be like telling jokes to an audience that never laughs.

Also, hopefully today or tomorrow I can update. Homework has been kinda heavy recently.
No. 146658
[x] It's Sparkling! wins.

After much waiting, it is here! Thank Nobody for getting me pumped up again.

You slide into the hall.

You didn’t hit them, so it’s all fine!

“Oh!” the antlered figure bellows. “You’re that kid who keeps dropping by, aren’t you?” The seams of his uniform creak as he raises lifts a hand. What is he-

You look past him at the green-haired shrine maiden highschooler.

“For times like these,” he says, looking her over. “See you later, kid!” He walks off, flashing a grin.

Ah! There it goes!

Head tilted, she brushes back her hair.

“If I tell them about this, maybe I can get Hoshuu and Ku-chan to come, too...”